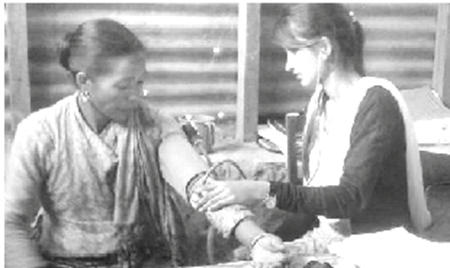 Mr. Motilal Shrestha, a 96-year-old man from Arupokhari 2, reached clinic out of breath. It took him 15 minutes walking uphill from Arupokhari 1, Saat Dobate to reach the clinic, which is operated by Real Medicine Foundation in coordination with the villagers. He is also the oldest person in the village. After taking a rest when he reached the clinic, he told us, “With old age, I am suffering from asthma and cold coughs. I am here to get a checkup with the doctor.” Health worker Bishnu Sharma is the “doctor” that Mr. Shrestha is talking about. Including Mr. Shrestha, dozens of villagers also come there to receive health services at the clinic.

“If there was no Bishnu, sir, many of the villagers would die a premature death. In fact, there is a government health post here, but it is too far. Health workers are also not always available in the health post. So, either we have to go to Arughat or to Gorkha Bazar. This clinic has saved many people’s lives here.”

Real Medicine Foundation has been providing services since last January in the building, which they renovated after it was damaged by the earthquake. The villagers provided the land for the building in which the foundation is operating. Real Medicine Foundation says that it is planning to work for five years in the village in health and other sectors: “Until now, we have been serving the people here only through this clinic, but now we will also help with the livelihood of the people here. We are preparing to bring forward different projects after assessing the needs of the people and receiving project ideas from the locals. We have the help and support of the people for the clinic we are running. Our organization works by request of the people,” said the representative of Real Medicine Foundation Nepal, Mr. Ganesh Shrestha. While buying medicines in the clinic, patients pay 25 percent less than the price marked on the packet.

Mr. Bishnu Sharma, the clinic in-charge, informed us that the money received from the sale of medicines is spent in the presence of the committee that was formed while establishing the clinic. The chairman of the management committee said that the money for the medicine is collected in order to continue the services even after help from Real Medicine Foundation stops. He said that the clinic is available for the people, whether they are injured by the earthquake or they get sick at other times.

According to Ale, since the government health post is not suitably located and the health worker is not always available, people love this clinic. A new building is being built after the clinic’s building was damaged by the earthquake. RMF is building the new building for the clinic. The land for the building was made available by the community, said Mr. Shrestha, who is the Nepal Program Manager for RMF. Mr. Shrestha had just discussed the new building and the new programs of Real Medicine Foundation with the community.

According to Mr. Shrestha, the clinic is being built with a birthing center too. But the villagers would like a birthing center with a lab. People from Arupokhari, Pandrung, Panch Khuwa Deurali wards 2 & 1, and Tandrang VDC are the ones who benefit from the clinic. 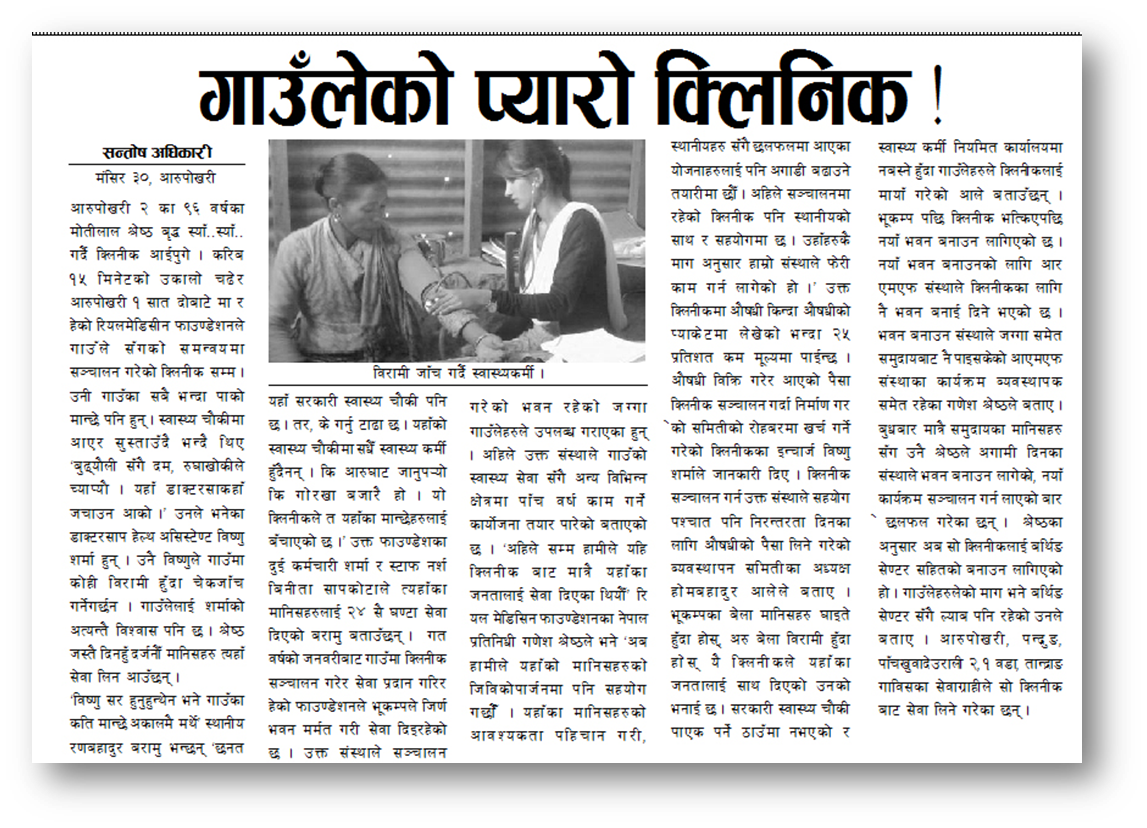 Categories: Interviews or View All
Return to Top