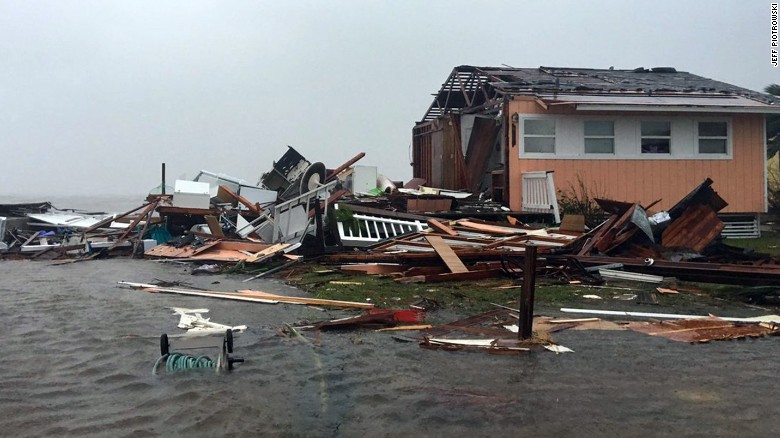 “(CNN) Texans who rode out the most powerful hurricane to hit the United States in a decade ventured out Saturday to find "widespread devastation" as Hurricane Harvey lumbered on in what was "now turning into a deadly inland event."

With dire warnings of tornadoes, torrential downpours and days of flooding to come, broad swaths of southeast Texas were littered with uprooted trees, toppled signs, twisted flagpoles and clusters of bricks peeled like scabs from walls and rooftops.

Fatalities were feared in coastal Rockport, Texas, where an estimated 5,000 residents had stayed put for the storm, which blasted ashore as a Category 4 around 11 p.m. ET Friday, between Port Aransas and Port O’Connor, Aransas County Sheriff Bill Mills said.

Callers to the local emergency dispatch line told of walls and roofs collapsing on people across the city, where an official had warned those who opted to stick out the storm to write their Social Security numbers on their arms for body identification.

"There’s been widespread devastation," Rockport Mayor Charles Wax told CNN late Saturday morning. No deaths had been confirmed, he said, adding that emergency workers were just beginning to go house to house to check on residents and assess damage.

The storm by late Saturday morning was still a Category 1, packing winds of 75 mph as it slowed its trek northward to just 2 mph. Coastal areas remained in danger of a potentially deadly 13-foot storm surge, with places even far inland predicted to get as much as 40 inches of rain through Wednesday.”

Real Medicine Foundation (RMF) is watching Hurricane Harvey unfold over the people of Texas and is looking to partner with local agencies to provide support to those affected. We are accepting donations to help those who are still in the midst of the storm.

In 2005, RMF successfully initiated a response team to those affected by Hurricane Katrina . While the government and hundreds of other organizations were working to provide food, clothing and shelter to hurricane victims, the volunteers of the Real Medicine Foundation believed that relief from the emotional distress can be just as important, particularly for children.

As the rains continue for the next few days, RMF will be working one on one with organizations dedicated to providing aid to those affected by Hurricane Harvey. Donations can be made through our website by clicking the button below.