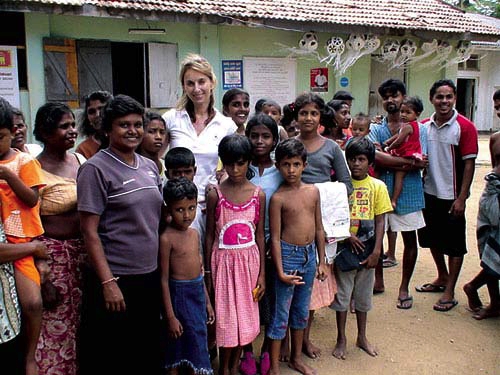 “Most people think only adults are homeless, but there are 16,000 homeless children in Los Angeles. Many of these children still go to school but have to walk through skid row everyday and witness drug transactions and more. So there is trauma coming from all sides. We need to get emotional and psychological support for these kids.” Martina Fuchs

A little more than a year ago, Studio City Pediatrician Martina Fuchs formed theReal Medicine Foundation to aid the victims of the Tsunami in Sri Lanka. Even&nbsp;though she admits at first she was scared and there were the discouragingnay-sayers, her decision to “follow an instinct&rdquo; and travel to the scene of the&nbsp;devastation have saved lives. Her efforts have quickly snowballed. Like-mindedpeople who want to do “good in the world&rdquo; have joined her. Sri Lanka was only&nbsp;the beginning.

Shortly thereafter, she responded to help the victims of Hurricane Katrina and&nbsp;with the help from other volunteer doctors and individuals, Fuchs has set uplong- term health care projects for children and families in seven countries in&nbsp;Europe, South Asia and Africa.

Fuchs celebrated the first anniversary of Real Medicine’s non-profit status last&nbsp;Friday by holding a fundraiser. Items in the silent auction put names and facesto their aid around the world, people donated directly to pay for medicine for a&nbsp;search…specific person in need.

Starting next month, Fuchs will start a project closer to home. The foundation will aid children and families who live in Skid Row near downtown Los Angeles by&nbsp;linking up with Para los Ninos and the Union Rescue Mission. Fuchs said she sees both similarities and differences between children living in poverty in Los Angeles&nbsp;and those in other parts of the world. “The kind of trauma that kids and familieswho are poor and homeless here in Los Angeles is even more complex and is&nbsp;actually harder in a way than for those who have suffered a one time disaster,”she said. “The children that are living in these circumstances every day who are&nbsp;walking near gang shootings and don&rsquo;t have a place where they are safe anddon&rsquo;t have a home and are living in cardboard — that&rsquo;s an ongoing trauma [for&nbsp;them] everyday.”

Safety, Predictability and Control are key components for a child&rsquo;s healthy&nbsp;development Fuchs points out. “In order to heal there has to be some type ofpredictability and safety in kids lives and the children who live in skid row don&rsquo;t&nbsp;have safety or control. They have no control over their circumstances [living with] gang shootings or having to walk by people using crack,” she said, “Most&nbsp;people think only adults are homeless, but there are 16,000 homeless children inLos Angeles," said Fuchs, who wants to grow the program throughout LAUSD, "Many of these children still go to school but have to walk through skid row everyday and witness drug transactions and more. So there is trauma coming&nbsp;from all sides. We need to get emotional and psychological support for these kids."

Real Medicine has focused on sustainable health care but it is its psychologicalservices that are its hallmark. The Foundation has become widely recognized&nbsp;among international relief organizations such as UNICEF and the RedCross.When last year’s Hurricane Katrina hit the southern states, the Red Cross&nbsp;called on Real Medicine to provide psychological counseling services to displacedchildren in Memphis, Tennessee. "Victims of disasters are stuck with emotional&nbsp;turmoil. Six to 12 months after the disaster, Post-Traumatic Stress Disorderkicks in, but there is a lot you can do early on to prevent bigger problems later," said Fuchs.

The foundation uses the ‘"whole community&quot;/&quot; whole person&quot; approach, whichconsists not only of setting up health care units and shelters, but also hiring local&nbsp;doctors and training local health care workers to keep units open andsustainable. Another part of Real Medicine&rsquo;s success has been in their cultural&nbsp;competence in treating and helping disaster victims. Real Medicine created aprogram whereby locals who live in the areas of the Foundation’s projects are&nbsp;trained to identify children who are at risk of developing harmful psychologicaleffects because of a disaster.

Real Medicine’s Chief Operating Officer Shubha Kumar said the Foundation hasbeen creative in developing income opportunities for its beneficiaries. "After the&nbsp;earthquake in Pakistan, there were many paraplegics who needed a lot of help.We bought each person a sewing machine and taught them to sew, so they&nbsp;would have a means to an income without having to depend on anyone else,"Kumar said.

The Foundation also provides interest free micro loans to families, “To give themways to sustain themselves,” said Kumar. The key to the interest free loans is&nbsp;that they are recycled – when one family pays a loan back, it becomes availableto another family. Kumar said they have partnered with a U.S. University to train&nbsp;people to disburse the loans as well as to train families in managing the money.

The Consideration of Cultural Factors&nbsp;

For Real Medicine&rsquo;s Strategic Planner, Kevin Thomas, who is also a medicaldoctor, sustainability has been the Foundation&rsquo;s main goal. “We are always&nbsp;looking for ways to deliver better health care and improve the infrastructure. Wetalk to people who know the local customs and culture to ensure we take the&nbsp;right approach,” said Thomas. One major obstacle in disaster and long-termmedical aid came up in Pakistan, a Muslim country in which women cannot be&nbsp;seen by male doctors, and in which there are few female doctors to serve thefemale population.

Real Medicine&rsquo;s solution was to hire female doctors and health care workers toemploy at health care units, whose training is at a level between doctor and&nbsp;nurse. “Women disproportionately suffer because of female doctors are hard to find. In many cases, women had never been seen by a doctor before Real&nbsp;Medicine,” said Thomas.

Fuchs added that their site in Pakistan have women lined up for blocks to be&nbsp;seen by the Foundation&rsquo;s 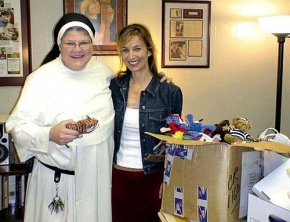 supervising health care worker, Dr. Rubina Mumtaz. “These women are receiving gynecological exams for the first time in their lives,” said Fuchs, “And this is how Real Medicine contributes. We cannot do what theRed Cross can do, but we can find the places that are not being served.”

Last year in Sri Lanka, Fuchs promised to find the money to help one child whoneeded a heart operation to fix a hole in her heart and another whose pituitary&nbsp;gland was severely damaged during an accident when she was 3 years old. “Shewas 11 (but) she had the growth of a 3 year old, [she hadn&rsquo;t grown since the&nbsp;accident] all her organs were stunted,” said Fuchs. “ We started to treat her withhuman growth hormones and she has completely changed, she is so pretty now, she grew 4 inches in one year.” she said.

At last Friday&rsquo;s fundraiser, a donor paid for the additional growth hormone&nbsp;medicine she will need for the next few years.

Parents return with their children to say Thank you

Last March, when parents heard that Fuchs had returned they traveled longdistances with their children anxious to show her how well their children were&nbsp;doing, “It was so beautiful to see how you can make a difference one person at atime,” said Fuchs. Some of the parents brought gifts which was particularly&nbsp;touching given their few resources, “ I have the handmade elephants, shellornaments and pin. This means a lot, they wanted to give something back.”

A favorite time for Fuchs and members of Real Medicine are the toy drives thatthey have started, “A lot of the children just don&rsquo;t have toys and have lost&nbsp;everything in the disaster and every single children just feels cared for whenthey get a gift. This is one of my most favorite things to give out those toys. We&nbsp;got a donation from Build- A-Bear recently to give out toy bears on skid row. It&rsquo;sjust so beautiful, if it&rsquo;s in Pakistan in Sri Lanka or India or anywhere it really&nbsp;makes a difference for that child,” Fuchs said.

Fuchs is currently developing “Guardian Angel,” a television show she will be&nbsp;hosting for The Learning Channel, which is part of the Discovery Network. Fuchshas made the decision to leave her job at Children&rsquo;s Hospital of Los Angeles to&nbsp;dedicate herself to her work at Real Medicine,

“Last year I decided I just wanted to help after watching CNN, and seeing the&nbsp;faces of the children that lost everything. It pulled me in. At certain points inyour life, some things take over, and you have the choice to follow or not. I&nbsp;followed it. The organization has attracted really amazing people from all overthe world and there is now a tremendous rippling affect which has created a&nbsp;fantastic team to work with.”

If you would like to volunteer or make a donation to the Real Medicine&nbsp;Foundation make a check to Real Medicine Foundation P.O. Box 1044 Studio City, 91614 or donate online or by Paypal www.realmedicinefoundation.org/donate