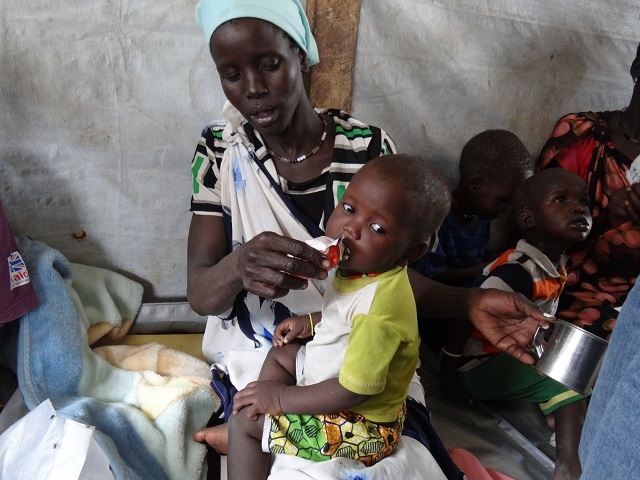 Photo: WHO Regional Office for Africa

In a media release, the World Health Organization Regional Office for Africa has indicated that undernutrition is still very prevalent in areas of Africa, and the numbers of stunted children is growing.

Read a small excerpt below.

"According to the WHO Regional Director for Africa Dr Matshidiso Moeti,“The numbers and trends highlighted in the report show that we need to work harder to avoid the long-term consequences of malnutrition and poor health on our children’s future prosperity, including the increased risk of dietrelated noncommunicable diseases such as diabetes and hypertension.” She added that the Report underscores the need to work harder on collecting and using accurate data given that nutrition information available for most countries is more than five years old, and the use of routine data for nutrition monitoring is extremely limited."

The Report points out that while the prevalence of stunting decreased between 2000 and 2016, the absolute numbers of stunted children are in fact increasing: from 50.4 million in 2000 to 58.5 million in 2016. Stunting, or impaired growth and development happens when children experience poor nutrition, disease and lack of psychosocial stimulation. It typically occurs before a child reaches the age of two, and the long-term consequences include poor school performance, low adult wages, lost productivity and increased risk of nutrition-related chronic diseases in adults."

The entire press release can be read by on the WHO Regional Office for Africa’s website or by clicking the images below.

Real Medicine Foundation is hard at work in Africa to provide proven methods and solutions to those affected by malnutrition in certain areas of Africa. *RMF has partnered with UNICEF to bring our expertise in Malnutrition Treatment, Education and Outreach into one of the hardest hit areas of South Sudan, Jonglei State.

The proposed nutrition scaling up project is designed to ensure that all children with Severe Acute Malnutrition (SAM) are reached with a package of integrated nutrition services in the counties of Jonglei State assigned to RMF by UNICEF: Nyirol, Pibor, Ayod, and Fangak. The RMF services will serve a total population at 240,000, reaching 45,000 children and benefiting an estimated 7,214 total SAM Children (6-59 months of age) and at least 60% of Pregnant & Lactating Women (including IDPs and host communities) in each targeted county.