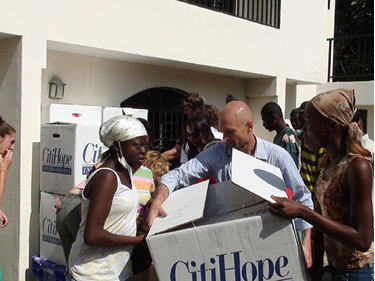 The non-profit, originally valley based organization, Real Medicine Foundation, is in Haiti. Dr. Martina Fuchs, a valley resident, and her colleagues has opened up a stationary health clinic in Port-au-Prince and this week remarkably opened up a second clinic located right in what was the epicenter of the earthquake. They have aptly named that clinic "Rubble."

"Show some love for Haiti," is Fuchs message for folks back home and around the world. They worry that as time passes, and news about Haiti moves from the top of the newscast, the critical needs of people devastated by the quake, will wane. This Valentine’s Day said a Real Medicine spokesperson is an opportunity to assist those in greatest need and can be the greatest expression of love.

"Please don’t forget Haiti. Don’t let the world’s spotlight fade too quickly," said Fuchs, "There are so many people who need our help and who are relying on us to stay alive."

Michael Lear, Director of International Relations for the Real Medicine Foundation wrote in a blog entry the difficulty in describing what he’s witnessed:

"Perhaps it is the staggering amounts of amputations, stories of being trapped, crushed, losing everything… seeing so many orphaned children lying scared and alone in body casts..utter destruction. While all of this has left me silent, nothing leaves me speechless more than the contemplation of how these people will recover – so may doctors, nurses, medical support staff are needed for the next months, probably years to come to ensure their recovery."

The rainy season is pressing and with that comes water borne diseases. Haiti has already had hygiene problems and the impact and exposure to people can be a public health disaster as large as the earthquake itself warns Dr. Fuchs.

More than 230,000 people died and thousands were injured in the January 12 7.0 earthquake and says there are many more bodies that haven’t been counted buried in collapsed buildings and are being recovered every day.

Miraculously, a 28-year old man, still alive was pulled from the rubble Monday, after being buried in a collapsed market where he sold rice.

The Real Medicine staff has been working nonstop since arriving in Haiti weeks ago. In addition to offering health care, the group has assisted in the logistics of feeding people.

"When Dr. Fuchs arrived, she encountered people who hadn’t eaten in a week," said Lilly Ghahremani, a spokesperson for Real Medicine Foundation.

"A group of young Haitian men approached Martina and the team when they first arrived in Port-au- Prince. They were looking for anyone who would listen to them, concerned about all the people still not receiving aid. Martina followed them and found 17 camps of people, which numbered over 40,000 people who weren’t receiving food. Martina went to the UN and was able to get every camp on to the UN World Food Programme Distribution list which enabled them to receive one meal a day," Ghahremani said.

The first Real Medicine clinic is located in a two-story building that appears to be a safe structure. Haitians started to line up outside the clinic even before it was open. They saw 200 patients the first day it opened. "I kept my stethoscope on at all times," said Fuchs, "there are many babies whose mothers were hurt in the earthquake."

Their approach has been to partner with local groups to ensure that the clinics and solutions it creates are sustainable. They are working to also create a sustainable mobile clinic and have been working with the Jimaní Project, a group from Knoxville, Tennessee.

"As soon as the local people realized what we were doing, they all pitched in. They helped to build shelves, cabinets, tables, everything. They did everything they could," said Ghahremani. "You have to be like a war doctor, what you don’t have you build. The local people built exam tables, cabinets, everything. They cleaned, painted, they did everything they could." Real Medicine Foundation also have had the help of local nurses. " They made it their own," described Fuchs. "When they finished and the clinic opened, people came just to sing out in front of the clinic in thanks. They know that this is going to help now and in the long term."

A key requirement for the clinics has been to assure that it is handicap accessible for so many of those whose limbs have been amputated.

"Beyond surgery and emergency care, they’ll need treatment and therapy so that they can move forward," Ghahremani said.

Dr. Fuchs previously worked at Children’s Hospital in Los Angeles and started Real Medicine in her quest to do more. Following the Tsunami in Sri Lanka was the start of her efforts to gather a medical team to provide medical aid. Since then the organization has built clinics and humanitarian projects to provide emotional economic and social support in Myanmar, Peru, India, Indonesia, Kenya, Sudan, Uganda and in the skid row area of Los Angeles.

To further their work to provide healthcare in Haiti, the organization is participating in the upcoming L.A. Marathon to raise funds.

Next week: The San Fernando Valley Sun/El Sol will continue coverage on Haiti and the accounts of the on-the ground work of the Real Medicine Foundation.