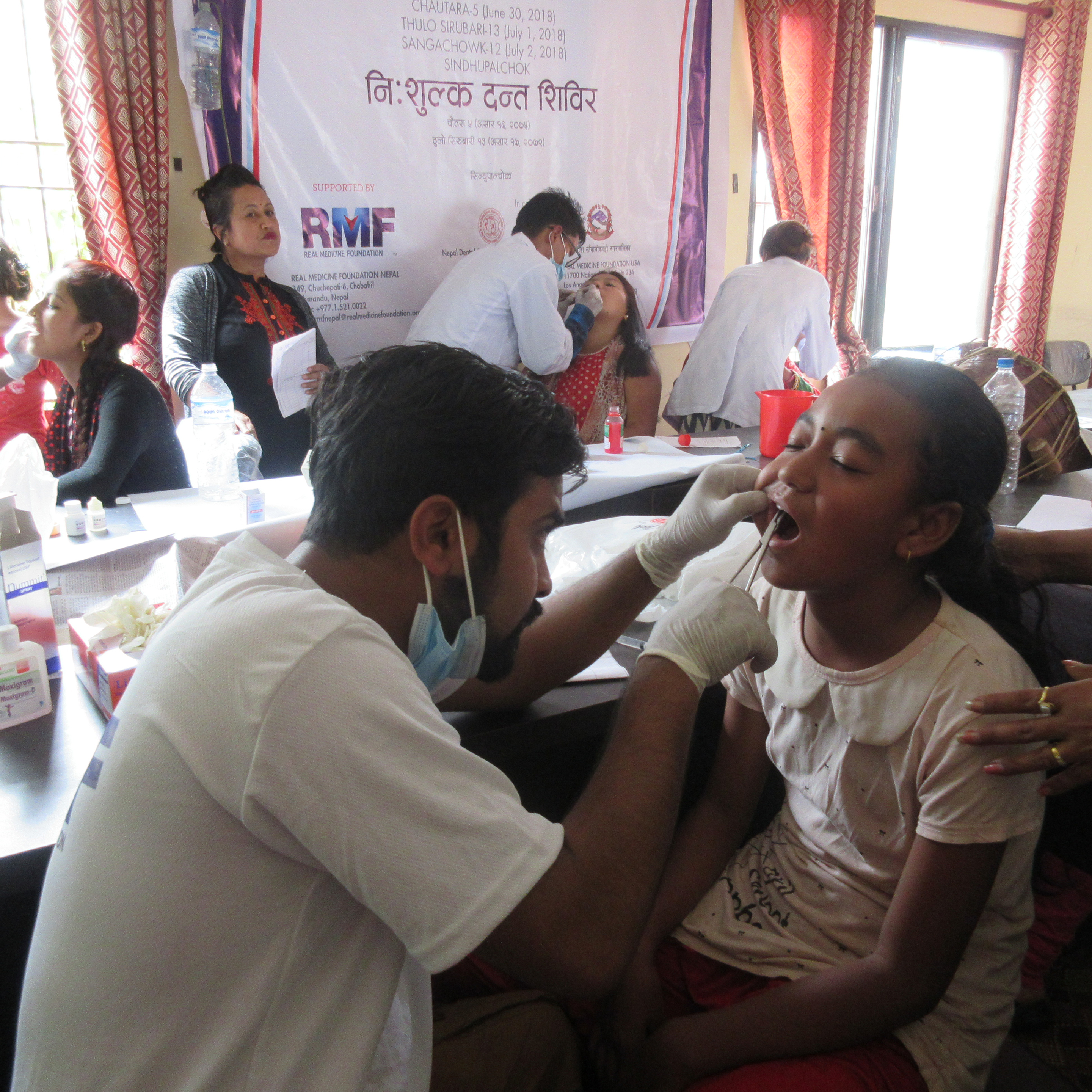 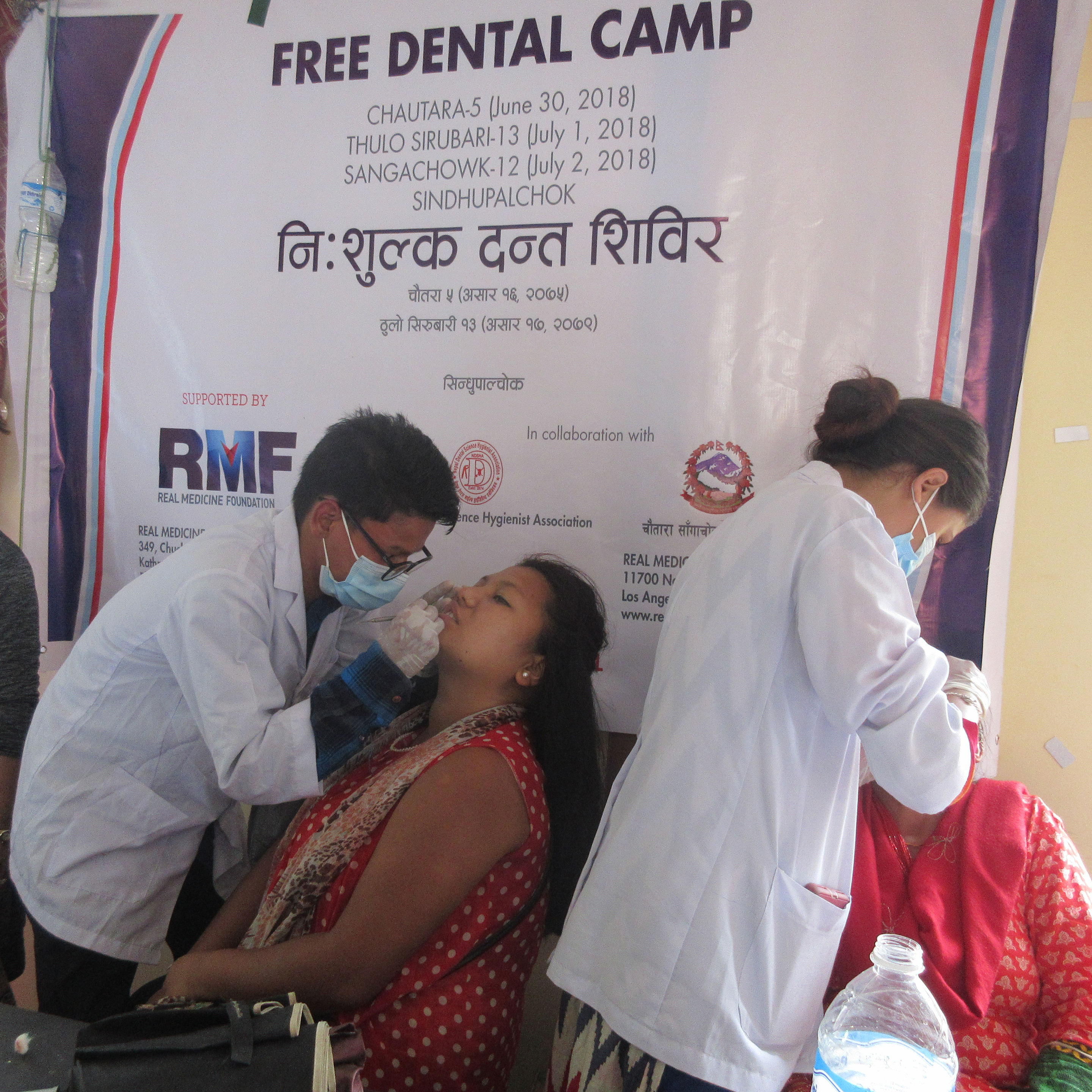 From June 30, 2018 to July 2, 2018, RMF supported a free dental camp in three health posts of Sindhupalchok district: Chautara-5, Thulo Sirubari-13, and Sangachowk-12. There is no regular dental service in the district, and more than 500 patients benefited from the services. The dental camp was conducted in coordination with the Chautara Sangachowk Gadhi municipality and Nepal Dental Science Hygienist Association. The first day of the dental camp was covered by the Lokpriya Samachar National Daily newspaper.

You may view the original article on the publication’s website, in PDF form at the bottom of the page, or read the translation below.

The Chautara Sangachowk Gadhi municipality has been conducting special events to ensure the good health of its people. In this context, a free dental camp was conducted in Chautara, Ward No. 5 on Saturday, the 30th June 2018. Chautara is the district headquarters of Sindhupalchok district.

On that day, a total of 194 clients received free dental treatment from expert dentists, and the services included assessment of dental status, as well as cleaning, dental extraction, and other specific treatment. The camp was organized by the health division of Chautara Sangachowk Gadhi municipality with technical assistance from the Nepal Dental Science Hygienist Association in collaboration with Real Medicine Foundation.

During the concluding meeting of the camp chaired by the chairperson of Ward No. 5, Mr. Narman Shrestha, the president of the Nepal Dental Science Hygienist Association, Mr. Michael Devkota, shared that dental problems are considered a common public health issue, and the treatment modality is very expensive. He expressed his gladness to serve people at their doorstep, for whom the treatment of dental problems was otherwise out of the question. On the same occasion, the program manager of Real Medicine Foundation, Mr. Ganesh Shrestha, explained that RMF has been providing continuous support to communities that have been affected by disaster and calamities as per its service policy. According to him, RMF has been working in different districts through its projects and also assisting organizations that arrange health camps throughout the country. He also expected that there would be many chances of collaboration between RMF and Chautara Sangachowk Gadhi municipality in the coming days.

On his remarks, the chairperson of the meeting, Mr. Narman Shrestha, stated that conducting such a camp was a part of the Doctors for People program of the municipality, which he decided was a necessary step to bear the responsibility of being the leader in the area. He expressed his commitment to conduct similar camps by collaborating with different organizations to serve the people and also expressed his gratitude to all the contributing organizations and individuals.

Mr. Durga Bajagain, family planning officer of the District Health Office, Sindhupalchok commented that the health system has now been integrated into the local governance system as per federalism in the country, so that the local government can implement different programs according to the actual needs of the community. In such a situation, organizing health camps as per the requirement of the community is much appreciated.

The health coordinator of the Chautara Sangachowk Gadhi municipality, Mr. Shiva Puri, was elated when the camp was organized in 3 out of 14 wards of the municipality with limited resources. It was considered a huge success, with a significant number of people attending and receiving necessary treatment. He explained that this camp had motivated him to conduct similar events in all 14 wards in the near future by collaborating with numerous organizations. The conclusion of the meeting was coordinated by Mr. Keshav Napit of the health division of the municipality.

According to Chautara Sangachowk Gadhi municipality, the camp would be continued for the next couple of days in Thulo Sirubari and Sangachowk.

The chief administrative officer of the municipality, Mr. Indra Prasad Basyal, encouraged all the citizens that as different free health camps are organized by the municipality according to the needs of the people, they should attend and take advantage of such opportunities.

Categories: Interviews Nepal or View All
Return to Top