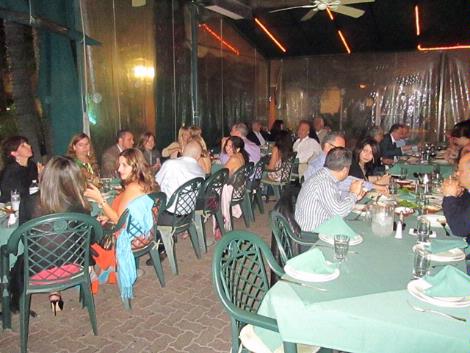 photo: Some of the soiree participants

The Real Medicine Foundation, a Non-Governmental Organization providing humanitarian aid and development all over the world, organized a Mediterranean Soiree June 22 at Alcazar in Encino to benefit the Shinuhayr Clinic in Armenia’s southern Syunik province.

As guests stepped in the door June 22 at Alcazar, the Fine Middle Eastern Cuisine Restaurant, they were greeted by a coordinated web of folks volunteering their talents and resources for the cause of helping people. And when the motive is that pure, the task of showing people a good time comes naturally.

For starters, the guests ate well. Vatche, the owner of Alcazar, organized appetizers for the crowd of 100 from his vast appetizer menu.

After hours of appetizers, there was strong coffee and dessert. On the patio, double-apple tobacco smoke wafted around in the air as people relaxed with hookas, every once in a while casually taking draws from the long tubes.

The good times didn’t stop with authentic cuisine, or dessert, or hookas. The guests were even serenaded by the owner of the restaurant, who sings in eight different languages (Greek, Farsi, Armenian, English, Arabic, French, Italian, Spanish).

The host of donators communicated true support for the Real Medicine Foundation’s work in Shinuhayr, as well as the cohesiveness of the community in Los Angeles.

The ties binding Los Angeles to Armenia are so strong. Rafael Barragan, the general manager of Sherman Oaks Best Buy responsible for the company’s donation, reported that approximately 25% of his employees are of Armenian or Middle Eastern decent. Anahid Moradkhan, the artist, is an Armenian who can switch languages as quickly between English and Armenian as she can between Armenian and French. Dr. Antanesian, another local Armenian, has been a consistent supporter of RMF’s Armenian campaign for years.

Behind the scenes at every RMF Team Armenia event are Nairy Ghazourian and Dr. Martina Fuchs. Dr. Fuchs is the driving force behind RMF all over the world, and Nairy is Country Director for Armenia.

Dr. Fuchs has described RMF that continues to work in disaster and poverty-stricken areas after the news and spotlight have moved on, reaching more than 8 million people in 15 different countries across 4 continents.

Ms. Ghazourian has been a tireless donor of her time and organizing efforts. She is a volunteer for RMF, who initiated the project in Shinuhayr, Armenia, and has coordinated several events to support the clinic. She’s found a way to use her giving of herself to inspire others to give, and to strengthen the link between Los Angeles and Armenia. Ghazourian will be traveling to Shinuhayr August 2012 to work on the ground at the clinic.

She will be helping the Armenian people whom she’s so lovingly connected to. Upon return she’ll continue to strengthen the connection between her Los Angeles and Shinuhayr communities, much like she did with the event at Alcazar June 22 – and the connection was strong. With all the food and entertainment, RMF raised enough funds to support the Clinic in Shinuhayr in all of its many medical endeavors around the village, making this one the third most successful fundraising event to date for this project.

To learn more about the Real Medicine Foundation’s work around the globe or to make a donation to your desired project visit: www.realmedicinefoundation.org
Joe Roos is a writer from Minnesota, living in LA