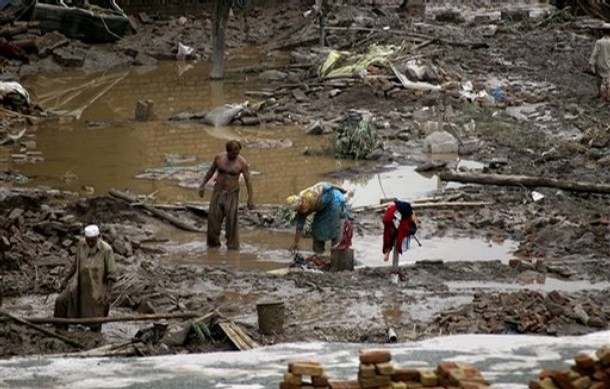 The freak monsoon of 2008 wrecked havoc across Pakistan. The North West Frontier Province and its adjoining tribal areas had the most casualties where flash floods killed 200 people overnight, literally sweeping away property and livestock of over 114 villages comprising of 11,200 houses affecting over 67,000 people.

Scores of people were marooned by the floods and had to be rescued by military helicopters over several days. The scale of damage was declared high since there was no effective warning mechanism and many of these people living below poverty line had encroached into waterway active flood plains living in makeshift mud houses. 40,000 acres of cultivated land were also badly affected ruining the crops and making the survival of these already homeless people all the more stark.

The National Disaster Management Committee of Pakistan and the Emergency Relief Cell housed these homeless flood victims in tent villages in Charsadda and Mardan. It is a well established fact that unhygienic and crowded living conditions of tent villages render its populations vulnerable to a wide range of diseases.

RMF collaborated with Relief Foundation, a local, private, non-profit NGO that works for poverty reduction, improving quality of life of the ultra-poor and provides free medical relief to the vulnerable in far flung areas of Pakistan, to set up four free one-day medical camps for these flood victims. With a volunteer team of 15 male and female doctors and 9 paramedics and a coordinating team of RMF health staff, over 2,800 flood victims were treated during the first 2-day camp of Feb 15-16, 2009. The doctors covered all specialties inclusive of orthopedic surgeons, dentists, ophthalmologists and pediatricians.  The process conduct of patient flow followed a simple systematic route.  All patients after initial registration were screened by general physicians in the filter clinic who also provided PHC. Subject cases were referred to the relevant specialist. Complicated cases were referred to tertiary level hospitals in Peshawar and Mardan. Prescriptions were taken by the patients to the pharmacy where free medicine was distributed. Most of our volunteers are physicians on the faculty of tertiary level teaching hospitals in Peshawar, thereby in a position to facilitate the referral cases on their home grounds.

Two weeks later, another 2-day follow up medical camp was set up in the same place on March 7-8, 2009. This proved to be an even greater success where 3,178 patients were treated. The total number of prescriptions dispensed was 3,034. The most common diseases presented in all four camps were gastroenteritis/diarrhea, respiratory tract infections, and dyspepsia with malnutrition and worm infections mostly in children. However the most common complaints were general body weakness and depression, the former merely a symptom of the latter.

The medical camps proved to be very successful having had intensive pre-camp processes of announcing the upcoming events via media, pamphlets, radio and local cable providers, mobile car-loudspeaker announcements as well as mosque announcements prior to every prayer call. All volunteer doctors were awarded certificates of appreciation. The credit for the well management of the camps actually goes to Relief Foundation whose staff is well trained and has conducted about 30,000 camps since its inception in 1988.

The response from the local community was overwhelming in their appreciation for this direly needed facility. The gender-wise flow of patients showed a near equitable number of women (45%) visiting the camps, a factor that can be attributed to the significant number of female doctors/dentists (7) available.