The War in Pakistan and Internally Displaced People: People Like You and Me 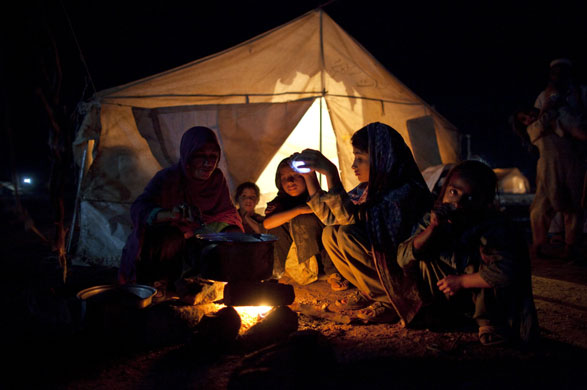 Displacement is an inadequate, meaningless word when it is used to describe the trauma of being wrenched from your home and forcibly dislocated to a far flung place not of your choice.

Imagine an ordinary day in your life. Food is warm on the table, the children are out playing and you’ve send your other half or your teenage son to get bread from the bakery. Suddenly the shrill explosions of bombs landing in your backyard break the tranquility. The panic, the chaos, the screaming, the children outside; are they alive or not, people running helter-skelter. In an instant, life becomes all about survival, the very lives and safety of your loved ones. What do you pick up from your abode as you make the panic-induced on-spot decision to run for your life? Your clothes? Your money? Your identity papers/credit cards? Or do you just grab the hands of your loved ones and run?  This is what happened to over 2 million people. They fled for their lives with nothing on them except the clothes on their backs. 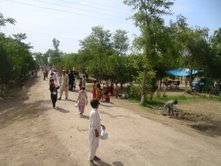 Hence the words ‘inadequate and meaningless’ to describe displacement. The internally displaced people (IDP) are people like you and me, who had perfectly good lives till the Taliban decided to invade this tranquil scenic mountains of Swat in Northern Pakistan. The Taliban did not come overnight. They slowly insidiously infiltrated into the area, preaching about Islam, missionary in their approach to impose the Islamic Sharia (Islamic law) that assured peace, quick justice, law and order plus the promise of heaven hereafter. They recruited the bright eyed youth with immediate lucrative economic and power-based returns. The government of Pakistan initially turned a blind eye; it began to acknowledge the Taliban only when the metastasis of their networks reached into neighboring districts of Malakand.

However, for the people of Swat, the true nature of the Taliban became evident within a short time when public beheading of suspected spies and floggings of young girls for walking on the streets unescorted became commonplace events. Yet the government chose to flirt with the Taliban negotiating with them by giving them a legal status under the Nazm-e-Adl Regulation. Only when this agreement failed and the Taliban showed their true intent of spreading their violent leanings to the rest of Pakistan did the government respond with the long overdue military response. This too was badly timed and with no prior warning, the military attack on the Taliban took place literally overnight resulting in the fastest displacement of over 2 million people in just one month.
According to the UN, the IDP situation in Pakistan has been categorized as the worst human displacement of the world in the last fifteen years. It is considered to be more critical than the 1994 displacement in Rwanda.

Yet, hundreds of thousands of people are still stranded in the war zone, living in terror of the Taliban who are stopping them from migrating out by resorting to violent beheadings on the premises of their potential worth as hostages. 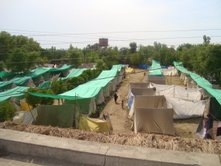 Today the IDP are living in tents established in the safer districts of NWFP in this scorching heat where temperatures run into the range of 38-44oC, without extra clothing, food, clean drinking water or health care.  Displaced children are believed to be facing severe acute malnutrition with dozens of children dying due to diseases such as gastroenteritis, typhoid and respiratory infections. Women from this highly patriarchal tribal of Pakistan where the ‘purdah’ of a woman is of extreme importance, sometimes even more than life and death, face the dual problem of maternal and child health problems as well as the reluctance to unveil themselves in front of male health care givers. According to the UNFPA, there are about 69,000 pregnant women in the displaced population with over 6,000 expected to go into labour within the next one month. They will need surgical care with blood transfusion but most important of all, they will need female health care givers. Already many women have died in childbirth or have lost newborns.

About half a million individuals are living outside the camps relying on the hospitality of friends, families and tribal networks while those in camps are receiving assistance from international and national aid agencies. The government has appealed to the international community, development agencies and the general public to share the burden of managing IDP. They need food, shelter, bedding, clothes and all things for basic living. Their children need to be in schools instead of loitering in the camps. Help needs to be delivered all the while maintaining their dignity and purdah of their womenfolk.

RMF Pakistan office has collaborated with several grass-root organizations working on different aspects of aid to the IDP. We have collaborated with Relief Foundation to set up free medical camps with volunteer doctors. Funding is required mostly for the cost of medicine. We have connected with the Quaid-e-Azam University which has set up a food and roof fund. A donation of US$ 100 will feed a family of 12 for a month. Similarly a donation of US $100 will provide a safe and decent shelter for 3 families. Three monthly pledges are recommended to ensure sustained and systematic aid.