Real Medicine deployed to the Dominican Republic on Wednesday, January 20, and began performing assessments on the Jimaní border hospitals, the Good Samaritan and the Hospital Melenciano, which have been receiving patients from Haiti since last week.

Both facilities have been overloaded as more patients arrive and the demand for post-operative care increases. Patients with pins sticking out of flesh, with amputations, and many children in body casts line every hallway and ground space. 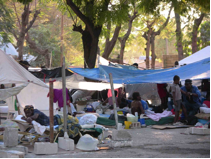 All of the patients at both hospitals had arrived via ambulance (if lucky enough), or piled in the back of flat bed trucks in numbers as high as 30.  The now congested 30-mile route between Port-au-Prince and Jimaní is taking up to an exhausting three to five hours.

At present the Good Samaritan Hospital is serving 800 meals being served twice a day to patients and staff.

Further complicating the situation have been the intermittent aftershocks in Jimaní.  On two occasions at The Good Samaritan Hospital, all patients were evacuated from their rooms and brought onto the lawn.  The fear was palpable. Everyone refused to sleep inside. 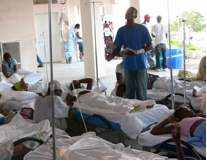 While the situation in Jimaní is overwhelming it pales in comparison to the challenges that face those in Port-au-Prince.  It is tragic beyond words and the magnitude of the destruction makes the transport of critical patients to hospitals and the delivery of food, water and medical supplies nearly impossible.

In addition to supporting the immediate relief efforts, Real Medicine Foundation is meeting with local government health officials in Jimaní and Barahona to coordinate long-term assistance as well as assessing logistics for longer term, ongoing physician deployment in Haiti. We are also preparing to establish mobile clinics.