Every morning, when I wake up to the honking horns, howling dogs, and bustles of morning life I wonder how the day is going to be. As I lay out my yoga mat and dedicate my practice to what will be, I try to take a deep breath for all that I can not anticipate. See, life in the field is a constant state of uncertainty, a question of what will happen next, and a sequence of highs and lows, equilibrium a state I no longer know.

But it all somehow balances out. 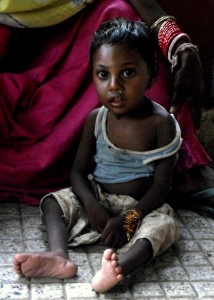 Vishal on his first visit to NRC

Today I arrived to the NRC to the smiling face of Vishal. Vishal arrived at the NRC two months ago presenting with severe acute malnutrition, apparent moderate mental disability, vomiting, and diarrhea, and was not taking food. He had a very severe infection that was treated, but he continued to refuse to eat. His mother was pregnant, and had stopped breastfeeding him 5 months previously—Vishal had never had complementary feeding, and was not responsive to attempts to give him F75, even through the breastfeeding assist.

Vishal continuously reached for the breast of his mother and grandmother, particularly when food was offered to him. However, it appeared that when Vishal’s grandmother was with him, he was more cooperative to feeding. His mother did not come to the NRC for several days, and Vishal began to take the F75. When his mother returned, Vishal stopped eating again. After a week we referred them to seek treatment at another hospital to seek further treatment, but they told us that they had been there before and would not go back. We continued to tell the grandmother and mother how important it was to get him better treatment/nourishment. The grandmother made every effort to get Vishal to eat, but the mother seemed apathetic.

Vishal was my first seriously complicated case in which I had no idea what to do next. At one point, I was up in the middle of the night blending peanuts to make RUTF! When we weren’t watching, his mother and grandmother would try to sneak him biscuits and chips (definitely not in the protocol!), which he would nibble on occasionally, but eventually throw in a fit of anger. In some last ditch efforts, we tried to put RUTF on the biscuits to see if he’d take that, but he wouldn’t. After a week we had asked the family to go to Jhabua District Hospital, but they refused and asked to stay at Jeevan Jyoti. 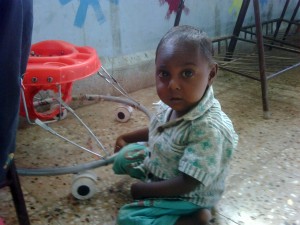 Vishal after 2 months of treatment

After two weeks, the family wanted to go home for a few days and come back. A wave of kids had just arrived and we knew that another child would fill the bed—we had no choice but to, once again, refer. They told us that they wouldn’t go and asked us to try more, promising to come back in a couple of days. We couldn’t guarantee an empty bed, and when they left the hospital, we could only hope they sought treatment elsewhere.

Every follow up day I’ve looked for Vishal. We’ve sent Community Nutrition Educators to his village, but he was never home and no one knew where he was or if he was migrating. I knew when we referred him to a higher center that his condition was critical, and didn’t want to think of the worst-case scenario.

And then today I see his smiling face. He’s up running and laughing and sharing toys with other kids in the NRC. I was absolutely overwhelmed with happiness. His cheeks were plump, he had a sparkle in his eye, and he was smiling. Far from the listless, angry, stubborn child from 2 months ago, Vishal was on the mend.

It turned out that our counseling had actually worked. The grandmother took Vishal to Dahod for treatment and he was put on anti-Tuberculosis medicines. They used our feeding techniques to get him to eat nutritious food, and they have also been engaging him psychosocially, stimulating his mental development and helping him achieve the catch-up that he needs. His mother gave birth to her second son 15 days ago.  Now is the true test to the efficacy of our counseling efforts and emotional support: will the family take back the knowledge given to them at the NRC to raise a happy and healthy child? We hope so. Based on Vishal’s incredible improvement, I think things will work out.