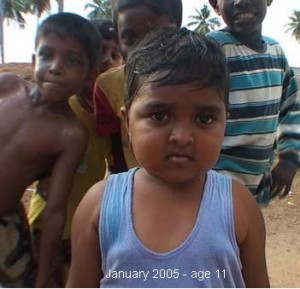 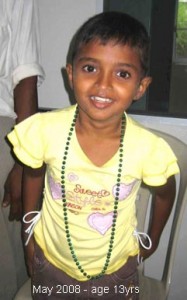 When Madumekala was 2 she suffered a massive head injury left her pituitary gland unable to produce Growth Hormone.

Dr. Silva, who first realized Madu’s condition, predicted that without treatment, Madu would not only grow up to be an incredibly short adult, but an adult with a number of serious health issues.

The pituitary gland is called the master endocrine gland of the body because it controls function over other endocrine organs. Without the variety of hormones released by this gland, the body simply cannot function the same way: muscles in the heart and lungs go undeveloped, bones do not grow or regenerate, fats and proteins are not metabolized, even the immune system is severely impaired.

The worst of it all for someone so young, is growing up knowing that you are not like everyone else, knowing that there is something wrong and being powerless to do anything about it.

Treatment was imperative, but very much out of reach. With treatment costs at 8,000 Rs. per week and a family income of 2,000 Rs ($20) per month, Madu’s family was forced to collect from their community in the hope of making even the initial payments.

In 2005, their dreams to start treatment were washed away with Tsunami—or so they thought. After loosing everything, Madumekal’s Family moved to a temporary shelter at Kabul-Pura Flats, Seenimodara in Tangalle. It was here that Madu met Dr. Martina Fuchs of Real Medicine.

Touched by Madu and her family, in 2005 Dr. Fuchs decided to fund Madu’s hormone therapy through Ruhuna Medical College. A few months later, Madu began her treatment along with 5 other children from various parts of the Southern Region of Sri Lanka.

As of 2007, RMF also supplies Madu with a food parcel every month of milk powder, grains, red rice, fresh vegetables and fruit to ensure that her body has everything it needs to use the hormone treatment to its fullest potential.

Stargate: The Ark of Truth buy

As our Country Director in Sri Lanka, Michael Lear wrote in 2008, “It is hard to put to put a price or value on the dignity, hope and possibility that this program has made available to these children. And I won’t even attempt to put into words what this program has meant to them. In the near future we’ll have posts from the children explain in their own words the impact of such support.”

Read what Madu has to say: Madu’s own Words

Categories: Sri Lanka or View All
Return to Top