I had written about Dionicess IV’s chocolate and beer last May, and I had heard about the Dionicess events that had come before that as well, so though I had never been, I was sure I knew what to expect from Gev Kazanchyan’s Dionicess V.

This was my first event: beer by four different breweries and pizza by Tomato Pie. Simple enough, right? Well, no. Not really.

Not all Those Who Serve are Barkeeps 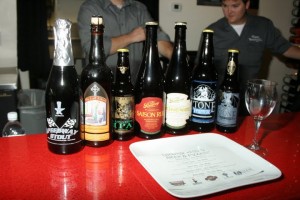 Once at CitySip I was put to work immediately and met the team as I went.

All together, we were a fellowship of ten behind the bar: Gev Kazanchyan, writer, professor, and gracious host; Nicole Daddio, owner of CitySip LA who not only donated her space but went above and beyond to help out through the day; Nate Sellergren, home-brewer extraordinaire and Stone Brewing Co. rep; Dave Watrous (the “Greuze-Hound”) humanitarian, teacher, and beer-savant; and Harout Bursayan, photographer and Dionicess graphic designer.

Though everyone helped out, of the ten of us there were formally five servers including myself: Nairy Ghazourian, CEO of Wellness Matters, Inc., Public Health Specialist and Real Medicine Country Director in Armenia; Sarah Kissell, Public Information Officer for LA County Public Health; Susan Scheinman, a holistic, custom nutritionalist with Ideal Source Nutrition; and Tamara Sofi of Total Health Enhancement, a designer nutritional supplement company challenging the perceived limitations of human (and horse) ability.

These women were incredible. My mom has a name for women like these: lionesses. And they were. I did not know I was working in such close proximity with so many accomplished doctors, scientists, and healers until I was forced to steady myself while hearing things like, “well, it is about as close to a cure as you can get for sickle cell anemia without changing the DNA, which is basically impossible.” Look sharp. This is the real thing.

Gev likes to keep an element of surprise to his festivities so as he puts it, “people get more than they expect”—and he goes to great lengths to keep it that way. 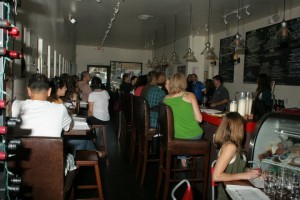 On the other hand though, he is also an impeccably thorough host who likes to keep his guests comfortably in the know. For example, when things started to fill he scooted into the back and the next moment music filled the room. “If you start off with Celtic punk, people will get the general idea,” he said raising his glass as he walked back into the fray of hungry writers, friends, general enthusiasts, and hockey players.

Right out of the gate: surprise number one. As people began to filter in they were served a glass of Stone Levitation Ale by Stone Brewing Co. of Escondido, San Diego.  Besides setting the tone of a day with a bit of a bonus bang, Stone Levitation was meant to cleanse the palate.

This is a new beer by Stone Brewing, and it is actually a bit unique in the sense that when they first brewed it they were not all that impressed. They liked it, but they were looking for love. Tried, and true, they went back to the drawing board and flying in the face of Stone history they decided to reduce the amount of hops. It worked. As CEO Greg Koch puts it, on the Stone Brewing website, “lessening hops hurts but we all know that sometimes there’s some hurt on the way to true love." Though truly, my love belongs to Guinness, Levitation’s 57 IBU, bold and refreshing complexity was a delight I would happily flirt with again. 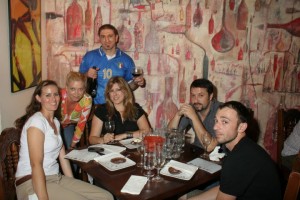 At exactly 12:25pm the first pizza arrived: a Breakfast Pizza with bacon, sausage, spinach, white onion, and egg. It was paired with Smoked Porter, an American porter also by Stone Brewing.

The smokey fragrance filled my glass and even that alone was strong enough to taste. This was an in your face beer. The day had officially begun.

It was a big hit—the strong, eccentric bouquet of sweet and sour. A dark roasted, malted beer, Stone’s Smoked Porter is even said to remind people of red wine in its deep, dark, and rich framework.

As for the Breakfast pizza, to be honest it was a bit strange—but, then again, I have a touchy relationship with eggs when they appear out of context. Let me explain. Though admittedly my favorite pizza is pineapple and jalapeño, I tend to consider myself a traditionalist when it comes to pizza. As long as the three main ingredients are there–cheese, sauce, and dough—then you really can’t go wrong. Of course, just the opposite is true once you start messing with those three basic components of the pizza DNA structure: mutations abound.

That said, I asked myself later: “So, if it was not a good pizza, could it be a good quiche?” And, like a complete lunatic, my answer was: “Sure.” Which, if nothing else, may prove that while a rose by any other name would smell as sweet, a pizza by another name might very well taste better.

Before we knew it, another pizza delivery man scuttled by and we were on to our second pairing: Orchard White, a Witbier by The Bruery of Placentia, Orange County paired with a pizza called Grandma. 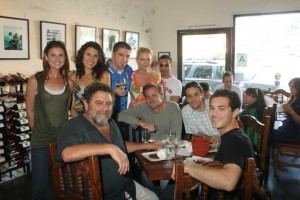 For obvious reasons, this pizza was by far my favorite. First of all, Grandma is a nick name I acquired at the ripe old age of 23 for doing various grandma-esque things like going to sleep early, asking people to turn down their music, and driving slowly.  I thought it funny too that just as I was questioning my place in the current pizza scene (i.e. not liking the “new fangled” Breakfast pizza that “all the kids” are eating these days), voila! My pizza comes along: crushed marinated tomato sauce, garlic, and parmesan cheese with fresh basil on top. YUM! I want to eat it again right now. Two thumbs up Tomato Pie.

The third pairing was Saison Rue, a Saison ale with 8.5% avb by The Bruery paired with Grilled Vegetable Pizza, a robust assembly of grilled vegetables, roasted garlic, and goat cheese drizzled in a light soy balsamic dressing.

This was another excellent coupling. The Saison Rue, named after the wild yeast strain used to help it age had a sweet, creamy flavor that brought out the balsamic and goat cheese. According to The Breury website, over time the active yeast in will bring out the “rustic notes of leather and earth” to eventually create an entirely different beer.

Hops Away: Poetry in Pesto 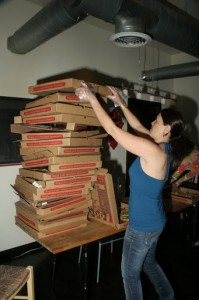 The proud Stone Brewing is not one to lack emotion when discussing their product so it’s no surprising to see Ruination lovingly described as “a liquid poem to the glory of the hop.” If it is a poem to the hop however, it is no ordinary poem but one modeled after the Star Spangled Banner, born amid the rockets red glare of a battle flamed sky.

Aptly dubbed, “the ruiner of palates,” Ruination drops a hop-bomb that obliterates everything in site. Like the Smoked Porter, I could taste the Ruination before it touched my lips. Unlike its flowery scent however, it was neither light nor blossoming but heavy and bitter, a veratable malted blackout.

For me, the hop-splosion was a bit overbearing but then again from a personal standpoint it was the perfect match for the pizza. I do not consider myself a picky eater, though this piece seems to be mounting some opposing arguments, but canned artichoke and I do not get along. Regardless, I forged ahead, wearily onward in the face of preserved vegetables, using the palate shredding power of the Ruination as a kind of artichoke annihilator. Victory!

The fifth and final pairing was dessert (or so we so navy thought): an exquisite prosciutto, plantain, pine nut, and honey pizza paired with The Lost Abbey’s Avante Garde, a Biere de Garde beer with 7.0% avb. 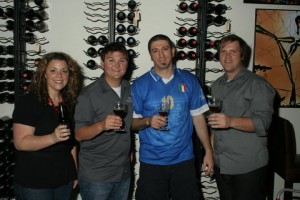 This coupling was my favorite because it was so unusual and yet so well matched. In this case, the beer and the pizza came together like long friends, effortlessly promoting and supporting each other. The earthy, creamy flavors of the pine nuts and plantains easily joined the doughy bread, apples, and vanilla flavors of the ale, and the ale’s sour yeast complemented the sweet honey of the pizza.

This was my first Farmhouse Ale so it helped to have Dave set the scene: “Imagine you are in the country, you work in the fields and you are just coming home from a long day. You take a bottle from a dusty, cobwebbed cupboard, and rest your feet by the fire…” I closed my eyes and there they were, the pizza and the beer sitting together, blissfully bundled in familiar comforts. 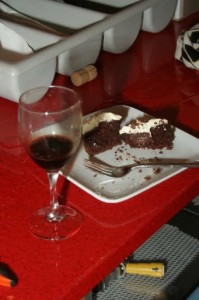 Of course, just as I was beginning to feel nostalgic for my own familiar comforts, out saunters Speedway, an ominous beer, dark and brooding, flanked by a highly suspicious partner in crime: the Irish car-bomb cupcake.We’re not in Kansas anymore.

Typical gangsters these two characters crashed the party and stole the show.  Speedway Stout by Alesmith, a self proclaimed “HUGE Imperial Stout” weighs in at a mammoth 12% abv. Made with pounds of coffee and chocolate aged in Bourbon barrels, it poured thick almost syrupy with the arrogance of fine liquor. It was marvelous. Speedway eclipsed all the beers that came before it, enveloping them in its vast and starless night.

The only thing that withstood this black blizzard was Speedway’s cohort, a mini cupcake made with love, whiskey, and scandal by miniature-cake-masters Christine Baboomian and Sarah Kissell. Like the rabbit at the Cave of Caerbannog in Monty Python’s Holy Grail, this cupcake was no fluffy pushover. A Guinness soaked body, a Whiskey fudge heart, and covered in Bailey’s frosting: it was like getting held up by someone wearing a corsage. Deliciously arresting.

With the help of our sponsors, CitySip, Tomato Pie, Stone Brewing Co., The Bruery, Lost Abbey, and Alesmith, all those who lent a hand behind the scenes, and those who bought seats and donated on their own ( Joshua Lurie of FoodGPS, Dr. James Fallon, Bryan Sullivan, and even CitySip’s own Nicole Daddio), we were able to raise $1099 for The Real Medicine Foundation. 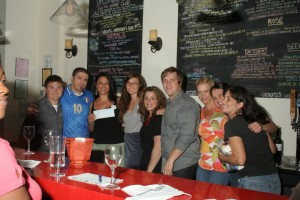 The event was not what I had expected—it was more. But then again, that is the nature of Real Medicine. The people that come to support us are of a particular breed.

It might sound lofty but it is true. In the midst of all the things that go wrong with the world, Real Medicine is doing something to help those in need and that kind of energy brings around some of the best kinds of people. People you read about, people who are changing things, even if only in seemingly small ways–like driving all the way out to Echo Park from Orange County for beer and pizza, or making a donation instead of the drive.

And these people are the heart of Real Medicine: real miracle workers slinging pizza and serving beer, real people lending their hands, lending their minds, their talents, and their weekends all for people who they will know only as people, who are in trouble far away.

Thank you for helping us keep our promise to care for and protect our friends around the world.

Categories: Events Los Angeles or View All
Return to Top