In Post-Quake Haiti, A Surge Of Amputees (NPR) 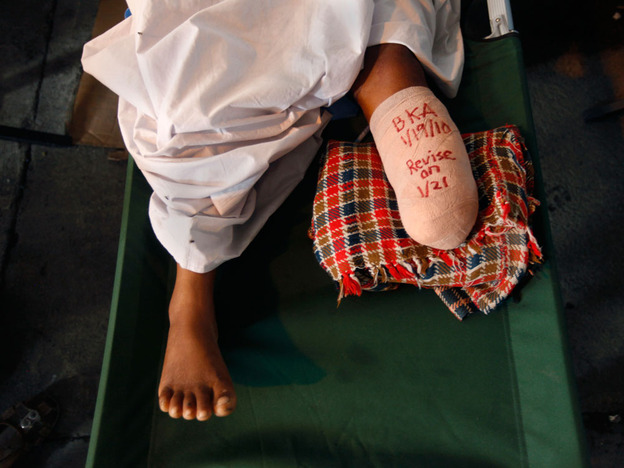 photo: A message covers a bandage on the amputated leg of earthquake survivor Vemah Cade at a U.N. field hospital in Port-au-Prince on Jan. 19. Since the quake more than 2,000 people have suffered amputations, according to World Health Organization officials.

In Post-Quake Haiti, A Surge Of Amputees (reposted from NPR.com)

Survivors of Haiti’s devastating Jan. 12 earthquake will have lingering memories of what they lost — loved ones, homes and cherished possessions. But some people will have constant, life-long reminders because they’ve lost parts of themselves.

Hospitals throughout Port-au-Prince are treating people whose injuries are so severe or so badly infected that they had to lose arms or legs. Since the quake more than 2,000 people — perhaps as many as 4,000 — have suffered amputations, according to World Health Organization officials.

L’Hopital de la Paix is normally a children’s hospital, but it is now packed with people of all ages and with every kind of injury, including elderly people with severe wounds and pregnant women. 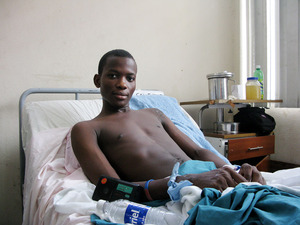 Jean St. Phar, a 22-year-old engineering student, was pulled alive from the wreckage of his university in Port-au-Prince, but his left leg and foot were so severely infected that he had to have an amputation. He is receiving physical therapy from the aid and advocacy group Handicap International.

Among the patients is Jean St. Phar, a handsome, slightly built 22-year-old who was studying engineering at a private university in Port-au-Prince.

He was buried in the wreckage of his classroom at the university when the earthquake struck, he says. More than 1,000 students are believed to have been killed when the three-story building collapsed at the university, Groupe Olivier and Collaborateur.

St. Phar was stuck in a hole, without water, and says he had to suck the sweat from the clothes of dead people lying near him in order to survive.

He says when he tries to imagine it now, it’s like a dream. But the nightmare continued at the hospital, where an amputation of his left leg was necessary. Now, there is only a stump about halfway down the calf.

Ruth Duggan is working at the Port-au-Prince hospital in an effort to help St. Phar and survivors like him. She is an occupational therapist from Halifax, Nova Scotia, volunteering for the French-based aid and advocacy group, Handicap International.

When Duggan introduces herself to St. Phar as coming from Handicap International, he winces at the word "handicap," and looks down at his legs. St. Phar’s older sister and brother flank him on each side of the bed.

Speaking though an interpreter, Ruth explains that her organization provides prosthetic limbs and training for people with amputations. She says that his injury will make it relatively easy to fit a new leg. "So he’ll be able to walk, play soccer, everything," she says.

St. Phar nods, but it is not clear whether he fully believes this. He’s still living a traumatic experience that was much more than the loss of a limb.

Ruth Duggan doesn’t have a remedy for memories, but she has practical ways to get a young man walking again. "Okay, so some exercises," she says. "He needs to be able to sit up straight. Don’t help, don’t help," she tells his brother. "Make him work."

The effort is obvious. As St. Phar sits up, the muscles in his injured leg tighten, and they hurt.

Duggan is sympathetic but persistent. She makes him do it several more times before she says, "and back down. Good. Relax."

Everyone around the young man smiles encouragingly as he works, but it seems to be as much for their own reassurance as for his.

St. Phar was scheduled to be moved to University of Miami’s hospital in Port-au-Prince, which was better provided for treating the wounds and the facture of his right leg. Handicap International planned to give him more physical therapy there and fit him with a temporary prosthesis.

Experts with the group say it is best to get people walking with prostheses as soon as possible, both for the patients’ morale and for recovery from the injuries.

Handicap International says they are planning to provide permanent prostheses for Haitians in the coming months — tough, durable limbs that are made for conditions in developing countries.