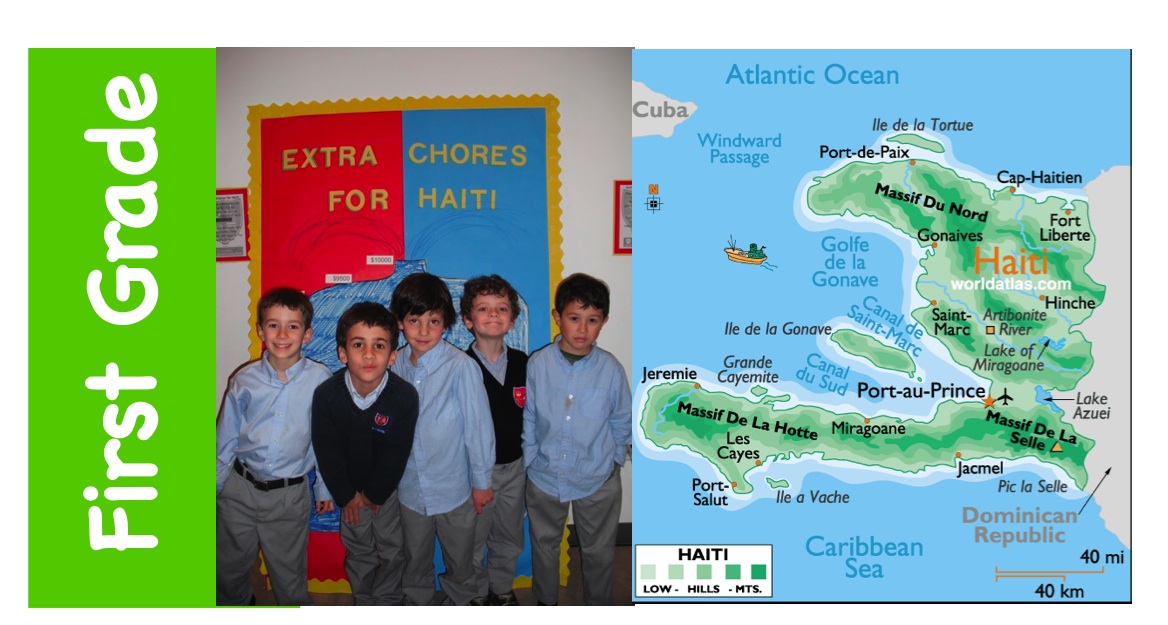 In the last few weeks the first grade boys have learned that sometimes from little things, big things can come. Their actions to support the people of Haiti created a ripple affect through the school community and what started with many of the first grade boys offering to empty their piggy banks and do extra chores became something so much bigger. The boys in first grade had already decided to challenge their big brothers to fundraise money for Haiti and then Roman came to school with a challenge for the entire school! Extra Chores for Haiti became a school wide effort! What started out during one early morning discussion in first grade transformed into a significant effort to help those effected by an earthquake.

Along the way, we were able to learn about Haiti, and, perhaps most importantly, learn about what it means to be a global citizen.  In our world today, this type of education may prove to be just as important as any.  We encourage you to continue learning about Haiti and monitoring the relief effort with your children.  The best learning happens when content transpires through all areas of our lives and is returned to again and again and again.  We are thankful for your support and grateful for the experience that we all helped unfold.

On Monday, February 8, the Cathedral School for Boys community donated $17,132.56 to the American Red Cross for their relief efforts in Haiti. The Sarlo Foundation have committed to match those funds and make an equal donation of $17,132.56 to the Real Medicine Foundation for the same cause.

Thank you again for your financial support, your emotional contribution and the continued support that you show your sons!

Please send any emails regarding changes to your son’s schedule before 12:00. I make every effort to check email throughout the day however, we have a busy schedule in first grade and I am not always able to check for email later in the afternoon.

Last week we spent lots of time reflecting on the class agreement that we created together at the beginning of the year. We focused particularly on “We take care of each other” and discussed ways that we can take care of each other whether at school, in the playground or outside of school. The boys decided that if someone gets hurt that they should stop playing to make sure that their friend is alright.

Later, our class came up with a list of things that makes us feel unsafe at school. After brainstorming the list the boys decided that the 3 main things that sometimes make them feel unsafe at school are when someone gets hurt by someone else, hitting or pushing and being lonely. We talked about ways that the boys can respond if they are in a situation that makes them feel unsafe. They decided that they could say “Stop doing that! That is uncool!” The next step is to tell the teacher or a parent. We read a wonderful story called “Say Something” written by Peggy Moss. In the book, there are some children who push and tease and bully. Sometimes they hurt other kids by just ignoring them. The girl in this story sees it happening, but would never do these mean things herself. Then one day something happens that shows her that being a silent bystander isn’t enough. After reading “Say Something” the boys reflected that it was important to step in to support someone (with words) rather than being a bystander. This is another way that we look after each other in first grade.