by Emma Lacey-Bordeaux and Ninette Sosa 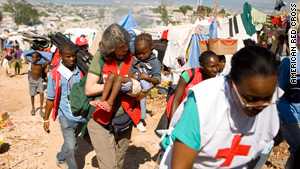 Friday marks the passage of one month since a magnitude-7.0 earthquake devastated Haiti. As thousands of Haitians gathered in the center of Port-au-Prince to remember what was lost that day, Ann Veneman, executive director of UNICEF, spoke to CNN’s "American Morning" about the situation.

"We don’t know how many actually were orphaned by the earthquake. There are so many children in Haiti without parental supervision who need to be cared for, who need to be fed, clothed and so forth and protected," she said.

Tracking down the actual numbers in Haiti can be tough given the circumstances.

Fact check: One month after the earthquake, what numbers are available to tell the story of devastation and recovery?

• Human toll: The Haitian government says the quake claimed the lives of more than 212,000 people and injured more than 300,000. The U.S. Agency for International Development estimates that 3 million people were affected by the quake and 700,000 in Port-au-Prince were displaced.

• Aid agencies: The U.N. Office for the Coordination of Humanitarian Affairs says that more than 400 agencies were registered with the Haitian government to do work in Haiti before the quake. Because some of the non-governmental organizations are small and work in remote, rural areas, their presence may not even be known to the Haitian government.

• Aid given: According to the U.N. humanitarian affairs office, more than 2.3 million people have received food aid from the World Food Programme and their partners, and more than 10,300 mosquito nets, 23,000 family tents, 26,500 kitchen sets and 79,500 blankets have been distributed.

• Sanitation: The World Health Organization estimated this week that less than 5 percent of the need for latrines has been meet. However, there has not been an increase in reported infectious diseases. More than 900,000 people have access to safe drinking water, but that still falls short of the goal of providing water to 1.1 million.

• Children: About 5,000 schools were destroyed or damaged in the quake. According to the U.N. humanitarian affairs office, the Haitian government aims to have all schools open again before the end of March.

Kathleen Strottman, executive director of the Congressional Coalition on Adoption Institute, estimates that there were more than 900 orphans in the process of being adopted into American homes when the quake struck.

Bottom line: One month after the most devastating earthquake in Haiti’s history, the available numbers show a nation with great needs. However, the numbers also show that aid is reaching a large percentage of the people.