Haiti Emerges From Its Shock, and Tears Roll (Times.com) 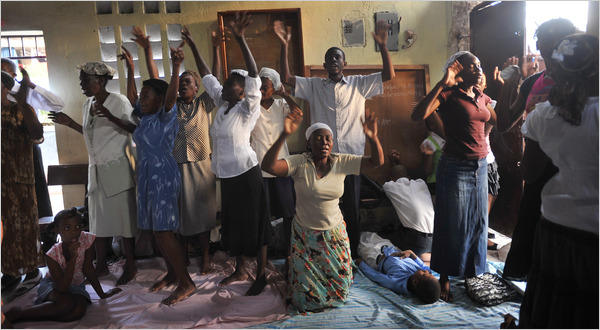 Haitians mourned during a memorial service on Sunday. The government said more than 230,000 people died in the earthquake.

Haiti Emerges From Its Shock, and Tears Roll

PORT-AU-PRINCE, Haiti — Will anyone remember that 17-year-old Angelania Ritchelle, a parentless high school student who wanted to be a fashion model, died of fright two days after the earthquake and ended up in a mass grave on the outskirts of this city?

In Haitian society, Rudy Bennett, 57, was a somebody, a prominent businessman and the younger brother of Michele Bennett, the former first lady and ex-wife of Jean-Claude Duvalier. But his death got little notice here, either.

Few were aware that his sister, a polarizing figure who lives in exile, had flown in with a search-and-rescue team to look for Mr. Bennett in the rubble of the Montana Hotel, where he had gone to fix an espresso machine leased from his food company. He was buried just last week.

The Jan. 12 earthquake was an equal opportunity leveler with such mass deadliness that it erased the individuality of its victims. According to the Haitian government, more than 230,000 people died in the disaster, but initially few had ceremonies to mark their deaths. Even the collective loss of life was not memorialized until this past weekend, when the government imposed a national period of mourning.

Bit by bit, though, the individual losses are coming into focus for Haitians finally ready to grieve. Many victims were not accepted as dead until the search missions were over, and many bodies were never recovered or were dumped in mass graves. But belatedly, funerals and memorial services are taking place daily, and the traditional word-of-mouth network known as telediol has reawakened, delivering death notices.

If Haiti, always stoic, first seemed too stunned to cry, the tears are rolling now for those who seem irreplaceable: the tax man who wrote software to detect fraud in a corrupt society; the gallery owner whose eminent Haitian art collection perished with her; the writer who translated the culture’s oral storytelling into prose; the feminist leaders; the nursing students; the factory workers; the teachers; and the children, especially the children.

“My little girls died at the very moment I was making plans for their future,” said Frantz Thermilus, the chief of Haiti’s National Judicial Police, caressing their pictures on his cellphone. “And the future of the children is the future of Haiti.”

His daughters Talitha, 12, and Emmanuella, 11, were crushed in their school, the Christian Institute of Haiti, when their mother was late to pick them up. She had been diverted by Mr. Thermilus, who had insisted that she stop first at an English-language academy to register the girls for intensive classes, he said.

“Someone else offered them a ride, but that person was not authorized to pick them up, and the school’s guardian wouldn’t let them go,” he said. “To show you just how sweet they were — they could have left without her permission. But they always respected authority.”

Head shaved, spine erect, epaulets starched, Mr. Thermilus spoke in his office at police headquarters. Tearing up, he said his daughters used to run to greet him when he arrived home. Talitha would tuck under his right arm, Emmanuella under his left, and he would debrief them on their days.

Now, having sent his wife and 3-year-old son to New York, he has barely left work since the earthquake. “When I go home, I’m in pain,” he said. “Here I can do something constructive.”

The earthquake not only took away his girls, Mr. Thermilus said, but allowed the 5,000 inmates in the country’s main prison to escape. “In those few minutes, so much I cared about was undone,” he said. “Justice undone, children gone, innocence destroyed. I mourn it all.”

Many mourn the older victims who had weathered a lifetime of Haiti’s adversity and served as the institutional memory of many sectors of society.

Brother Hubert Sanon, 85, for instance, was the first Haitian member of the Salesian order of the Roman Catholic Church, which plays a caretaker role for poor and orphaned children in Haiti.

The Salesians raised former President Jean-Bertrand Aristide, ordained him as a priest and eventually expelled him; Mr. Aristide ran, and radicalized, their vocational school in the neighborhood of La Saline, where Brother Sanon was sent afterward to restore order, the Rev. Sylvain Ducange said.

Brother Sanon died in his dormitory room at the school, whose collapse also killed scores of students. He was found sitting in his chair, rosary beads in hand, Father Ducange said.

A tailor by training, Brother Sanon had made the robes for priests and lawyers in Haiti for many decades. “Who will do this now?” Father Ducange asked.

And who will root out corruption with the single-mindedness of Lytz Elie, 43, an electronics engineer who had designed the Haitian government’s new software to fight fraud? He was killed in the tax department’s offices; like many government workers who died at their desks, he was among the most dedicated, working past quitting time.

“Most of the people who died at the I.R.S. and the Supreme Court are the die-hards,” said Louis Herns Marcelin, a sociology professor at the University of Miami. “They are the ones who understood their work meant something bigger than themselves.”

Referring to Mr. Elie, he said, “This guy who died is irreplaceable. He was against corruption with a passion. He was creating software that understood how Haitian bureaucrats steal and lie.”

To many writers, the loss of Georges Anglade, a geographer who had turned to fiction and literary theory later in life, seems unfathomable. A Haitian-Canadian, Mr. Anglade invented a literary genre in the style of Haitian oral storytelling. “He helped Haiti understand itself, and his death is a big loss for the intellectual world here,” said Evelyne Trouillot, a novelist and short-story writer.

Micha Bennett, 27, whose father died at the Montana Hotel, said, “It is hard to focus on any one individual because the country lost the country.

“But I know this: the last time I saw my father was the day of my wedding” in Miami Beach, shortly before the quake. “And it was one of the happiest days of his life.”

Patrick Delatour, 61, Haiti’s tourism minister, who is charged with overseeing the country’s reconstruction, spoke in a vacant motorcycle showroom beneath his temporary office about the loss of his octogenarian parents, misting up among the Harley-Davidsons.

“Watch out, you’re going to make me cry,” he said. “We in the government haven’t really had time to bathe in our own sorrow. To a certain extent, that has been a blessing. One month after the death of my parents, it’s just starting to sink in.”

His father, Cavour Delatour, 89, was an engineer and architect who spent half a century constructing and reconstructing the house that collapsed on him and his wife. He had worked on buildings throughout Port-au-Prince, including the destroyed National Palace, for which he served as engineer.

“It would have devastated him to see everything in ruins,” Mr. Delatour said.

One of the foremost collectors and promoters of Haitian art, his mother, Carmel Delatour, 85, amassed hundreds of works, including those of Bernard Séjourné, Andre Pierre and Tiga. Her 34-year-old gallery, Rainbow Art Display, crumbled with her home.

“The art died with her,” Mr. Delatour said.

The only room that survived was the basement library, thousands of tomes that make up “a strong part of the Haitian archives and the country’s memory,” Mr. Delatour said, adding, “So they leave behind all this knowledge to guide us.”

Angelania, the 17-year-old who aspired to be a model, did not leave anything behind, according to her cousin, Ms. Dupoux — “not a dress, not a notebook, not a trace.” Having fended for herself since her parents abandoned her at 4, she was often stressed, and the earthquake seemed to push her over the edge, said Ms. Dupoux, who lived with her.

“She was freaking out, screaming, ‘I have no school. I have no house. I have nothing. Why go on?’ ” Ms. Dupoux said. “Two days after the earthquake, these guys started pounding on the gates of the yard where we were sleeping, yelling, ‘A tsunami is coming.’ Everyone panicked and ran out, except Angie.