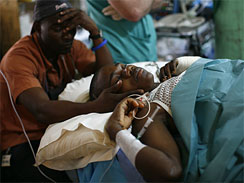 Haiti’s government has raised the death toll for the Jan. 12 earthquake to 230,000 from 212,000 and says more bodies remain uncounted.

The government initially estimated 150,000 dead on Jan. 24, apparently from bodies being recovered in the rubble of collapsed buildings in Port-au-Prince, the capital that was near the epicenter.

Haiti Earthquake – Latest Coverage
Haiti Relief: How You Can Help

Communications Minister Marie-Laurence Jocelyn Lassegue said Tuesday the government now counts 230,000 deaths. CBS News reports that 300,000 others were hurt and up to 4,000 have had limbs amputated.

But she says the new figure is not definitive. She says it does not include bodies buried by private funeral homes in private cemeteries or the dead buried by their own families.

The new figure gives the quake the same death toll as the 2004 Asian tsunami.

Four weeks after the earthquake, housing is still a big problem. Nearly half a million people are living in tent cities that have sprung up on the streets of Port-au-Prince.

On Tuesday, medical teams began vaccinating the children living there to protect them from measles and other diseases – they are worried about an o outbreak when the rainy season begins next month. 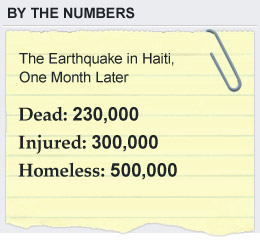 “People are just shooting each other,” he said. “There are fights over food. People are so desperate.”

Nearly a month after the quake, respiratory infections, malnutrition, diarrhea from waterborne diseases and a lack of appropriate food for young children may be the biggest killers, health workers say.

A shortage of medical equipment and spotty electrical power – service has been restored to about 20 percent of Port-au-Prince – have worsened the medical emergency.

Friday will be a national day of mourning in Haiti.