We met with the Settlement Commander at the Office of the Prime Minister’s Refugee Desk in Pakele and briefed him about RMF’s work in South Sudan and Uganda, where the refugee situation is becoming more and more overwhelming. RMF’s main areas of intervention would be healthcare and education. 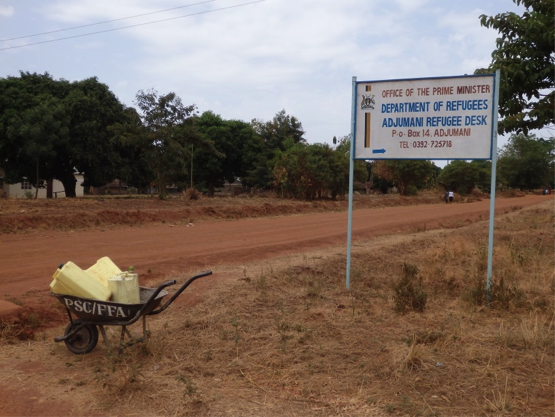 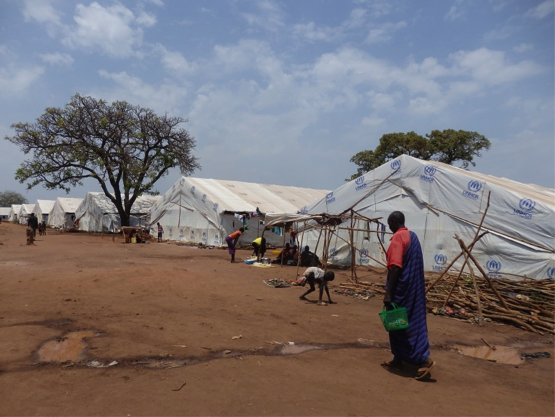 We visited 2 of the 5 camps in the area, Nyumazi 1 and Ayuilo, each of them with more than 20,000 refugees from South Sudan, mainly Jonglei and Unity States. More than 65% of refugees registered here are school age children, many of them unaccompanied minors. It is projected that the number of refugees in West Nile will continue to rise to 70,000 or more. 40,000 refugees from West Nile alone are expected to move on to Kiryandongo Refugee Camp, where RMF has been working since 2008. 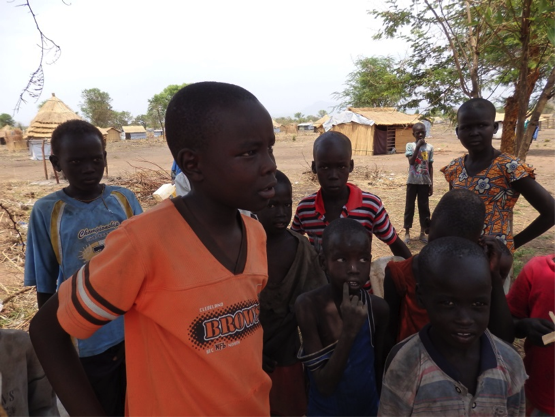 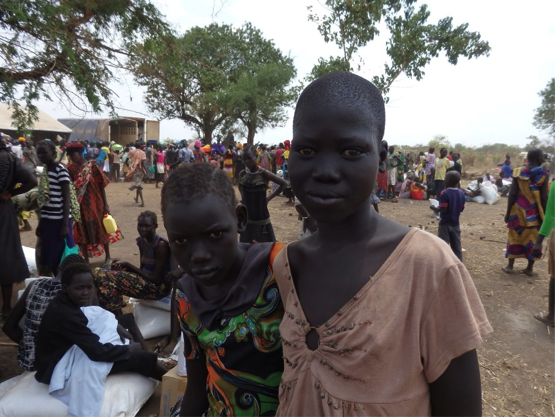 The situation in the camps is very poor; there are no proper medical facilities, schools, clean drinking water, bedding supplies, or mosquito nets. Our team visited the reception centre in Nyumazi and the two settlement camps (Nyumazi 1 and Ayuilo) and concluded that the challenges facing the two refugee camps are the following:

• Inadequate Clean Water: Water points established by agencies working in the camp sites are only one crest tank of 12,000L capacity which is very small given the huge population to serve. Additional bore holes/wells needed

• Lack of Schools: There are no schools in the camps and thousands of children, the majority of them traumatized, just roam around.

• Inadequate food for the number of refugees. A large percentage of children arrived malnourished.

• Inadequate shelter: Refugees are given one plastic sheet to erect a shelter, which in the already starting rainy season will be useless against exposure to infectious diseases, and is unsafe for women and children.

• Poor hygiene and sanitation: Open defecation will be a serious cause of diseases.

The majority of the refugees are surviving on small food rations from the World Food Program. The situation is even worse for unaccompanied minors, the elderly and persons with disabilities because there are no support programs or interventions in place for them.

From interviews with refugees, over 90% arrived in Uganda with the clothes on their back and no other supplies. To avoid the high risks of loss of life, large scale medical and supply intervention is acutely needed in the shortest time possible. 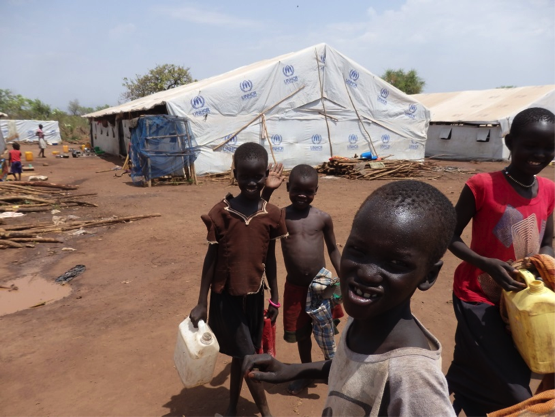 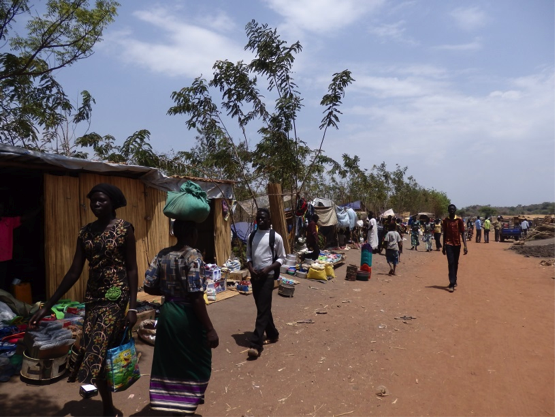 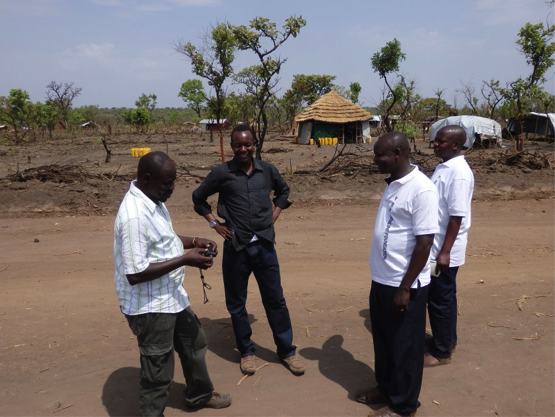 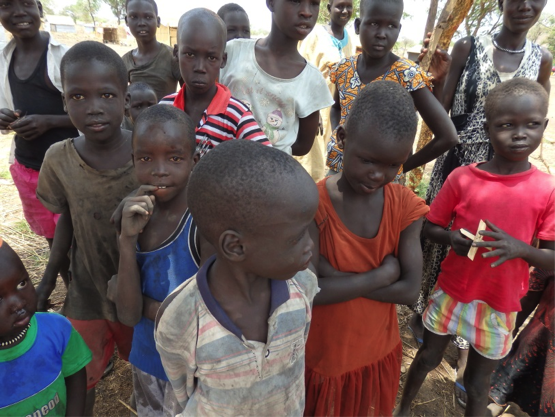 Refugee children, many of whom are unaccompanied minors 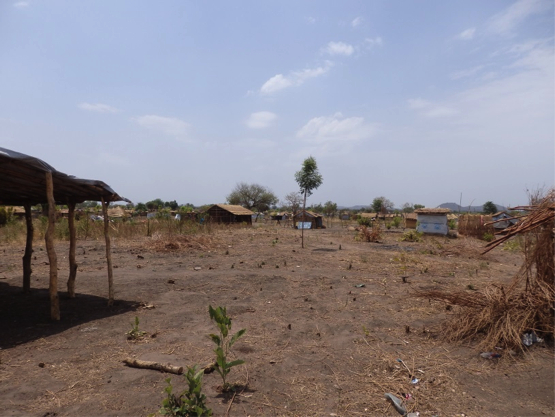 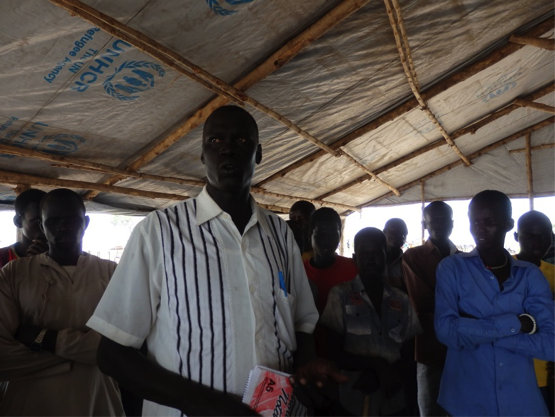 We had meetings with the camp leadership in both of the camps we visited, and I was impressed by their clarity, and concrete and realistic suggestions.

So many of the refugees’ stories are horrific. There are countless children who have seen their parents being killed in front of their eyes. A large percentage of these children are now in the refugee camps, unaccompanied by an adult.

The camp leadership requested as the most urgent:

Since many of the children are now orphans, school would help to give them structure and help with the horrific trauma they experienced.

Many of the refugees are professionals, teachers, doctors, university professors, which means South Sudanese could provide trauma support to South Sudanese. The camp leadership’s suggestions were very practical and economic:

“Let’s find the teachers in the camp, tents and ask for books/stationery/supplies and start school as soon as possible.”

Tomorrow: Read about the situation at Kiryandongo Refugee/Resettlement Camp and the Panyadoli Health Center there.

Categories: Disaster Relief In the news Uganda or View All
Return to Top