Voices From the Field: A Volunteer’s Story

I cannot stop thinking of how happy I feel knowing I made the right decision. For as long as I can remember, I have always wanted to have an experience like this. I can still remember how during the first year of my PhD studies I tried to contact several NGOs to try and volunteer in a developing country during my summer holidays. Most of the NGO´s would not accept my help for only a single month. I decided at that point to postpone this experience until my PhD was over. 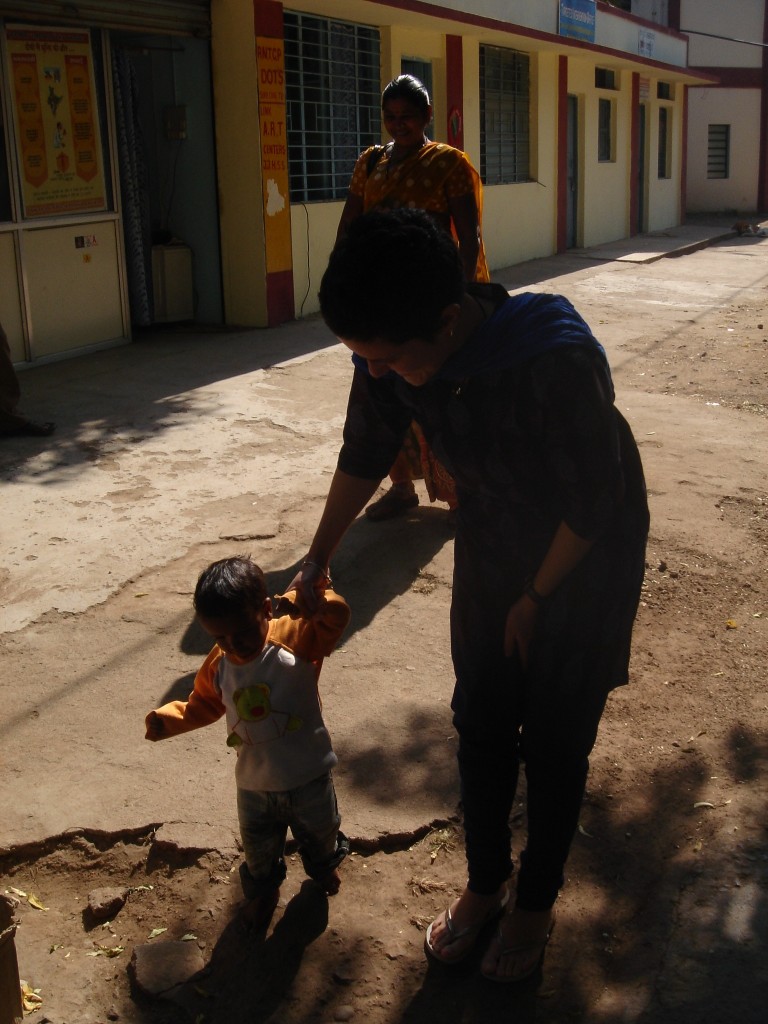 During my studies, I was lucky when in 2006 the Basque Government gave me a grant to go to Minneapolis (USA) to attend a training course and learn how to identify, isolate, characterize and expand a stem cell type from murine bone marrow.  It was during this time when I first had contact with lovely India without actually visiting. I preferred to stay with a local family in the Minneapolis rather than staying in a hotel and that is how I met the most interesting person ever: Nancy Ramer, an elderly Scottish very religious woman. She told me, the day after I arrived, that after finishing nursery she attended many patients during the Second World War in England, and during this time received “a call from God” asking her to help: her help was needed in a foreign country far away. She thought she would be destined to Manchuria, but finally, much to her regret, she was destined to Sangli, near Pune, Maharashtra, India. She thought everyone would hate her because India had at this time just recently become independent from England. She stated her conditions emphasizing she would never stay longer than two years in India.

But Nancy –also know as, Adji, which means “grandmother” in the Indian Marathi language- also promised something else: she would never get married. However, shortly after reaching this country, she met the man of her life, with whom she  married a few years later: an American engineer also destined to India. Besides breaking her promise of never getting married, she also ignored her initial conditions of never staying in this country more than two years, as she had lived 37 years in India, giving birth to four children. She is the one that brought me here with her magic stories told almost 5 years ago. 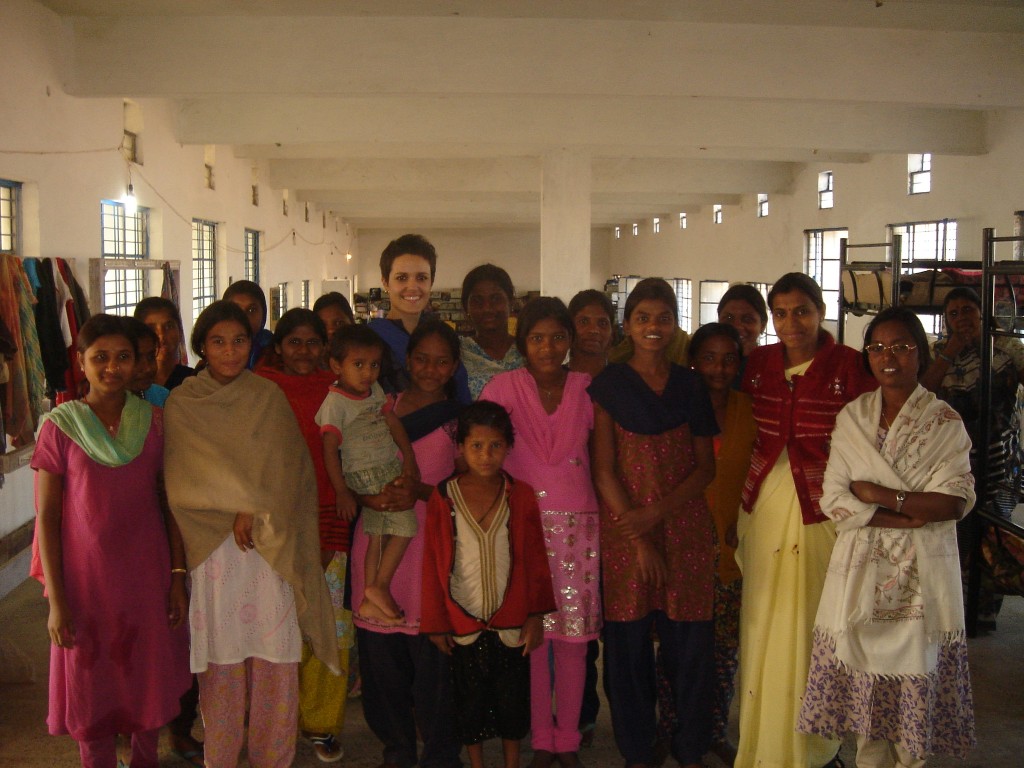 In 2010, after determining that my PhD studies would soon be over, through my friends in Minneapolis I tried to get in touch with several organizations working in India. In the beginning I contacted a new NGO called Help Kids India located in Kodaikanal, Tamil Nadu. However, as I was so immersed in my PhD studies that these initial contacts did not work out.  Soon after I got in touch with a Spanish organization called Asha-Kiran, and decided to go to their Shelter-House for semi-orphan or orphan children located in Pune, Maharashtra. But this time due to the delay of the presentation of my PhD thesis, I lost the opportunity to work with them and did not fit in their plans anymore. My hopes to visit India were diminishing just a week before the presentation of my PhD thesis.

The day of the PhD thesis, the 7th of October of 2010, a member of the tribunal, Luis Rodríguez-Borlado, let me know that a friend of his was working in India with an organization, and that if I wanted, he could get me in touch with her. At first I thought it was not necessary, as I preferred to contact a Basque or Spanish organization just to be able to know it before hand. However, after contacting several people I realized that all my efforts were not bearing fruit. About to give up on everything, I emailed Luis to ask if he could put me in touch with his friend in India.

On the 9th of November, without much hope, I sent the first e-mail to Valeria de Ascoita. Even if I do not know her very well, I will say that Valeria is a wonderful person, that put herself in my shoes and did everything she could to help me achieve one of my biggest dreams. Living in Mysore, India, she let me know she that could give my Curriculum Vitae to one of the staff members of the Real Medicine Foundation (RMF). Surprisingly quickly and unexpectedly Dheepa Rajan, the RMF Project Coordinator for India soon got in touch with me showed Real Medicine’s interest in having me in Jhabua, Madhya Pradesh. How happy I felt!

I must say that since then everything has worked out smoothly. I recognized the professionalism of the organization immediately, and honestly, now that I know it first hand and have been with them for a couple of weeks, I must say I was not wrong. 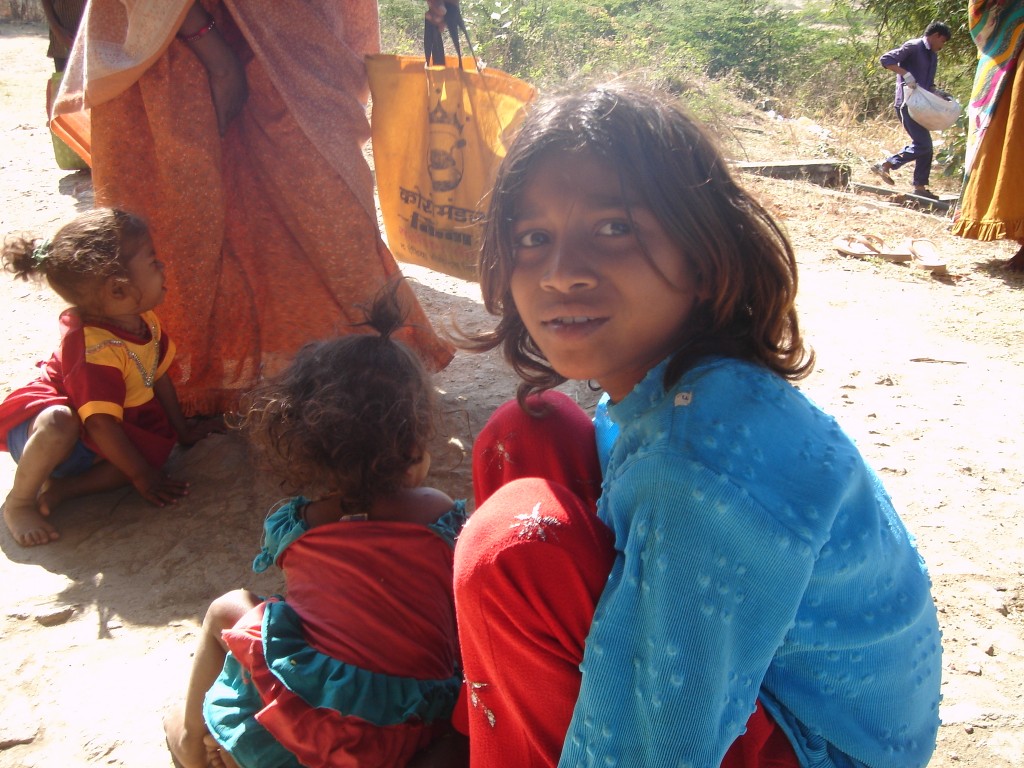 photo: Children at Jeevan Jyoti Hospital
After getting the visa that allows me stay in this country 6 months, I took the plane to Delhi on the 12th of January after stopping in Brussels. Even if I felt a little bit nervous, I must say that I was calm during the trip. I arrived in Delhi at 10:30 pm, and met with Real Medicine India team member, Jaimie Shaff, a young but mature lady that is the Program Manager for Health and Nutrition in India.

The next day, sleepy and tired and after being introduced to Caitlin McQuilling, the Director of Programs for RMF India, we went to a meeting. It was the first time I saw India in broad daylight. I remember how I analyzed everything on our way to the meeting; nothing attracted my attention especially but some cows eating garbage and a lot of people seemingly wandering aimlessly. But on our way back from the meeting, I witnessed one of the worse, if not the worst, moments of my time in India: suddenly we heard two sharp knocks in our back window. When I looked at them, my heart contracted: two little boys one about 6 years old, the other one about one and a half, were begging; the younger one was naked below the waist, both filthy. Caitlin opened the window and extending her arm, she gave them some food we had bought before the meeting. Looking at our gift, they moved away with big lovely smiles. I guess probably due to my tiredness from travelling and nerves…in tears I told Caitlin and Jaimie not to worry to see me cry, that this was my first shock in India. I began doubting my abilities to live in this country, fascinating but hard. I even thought of the possibility of having to leave India before expected. 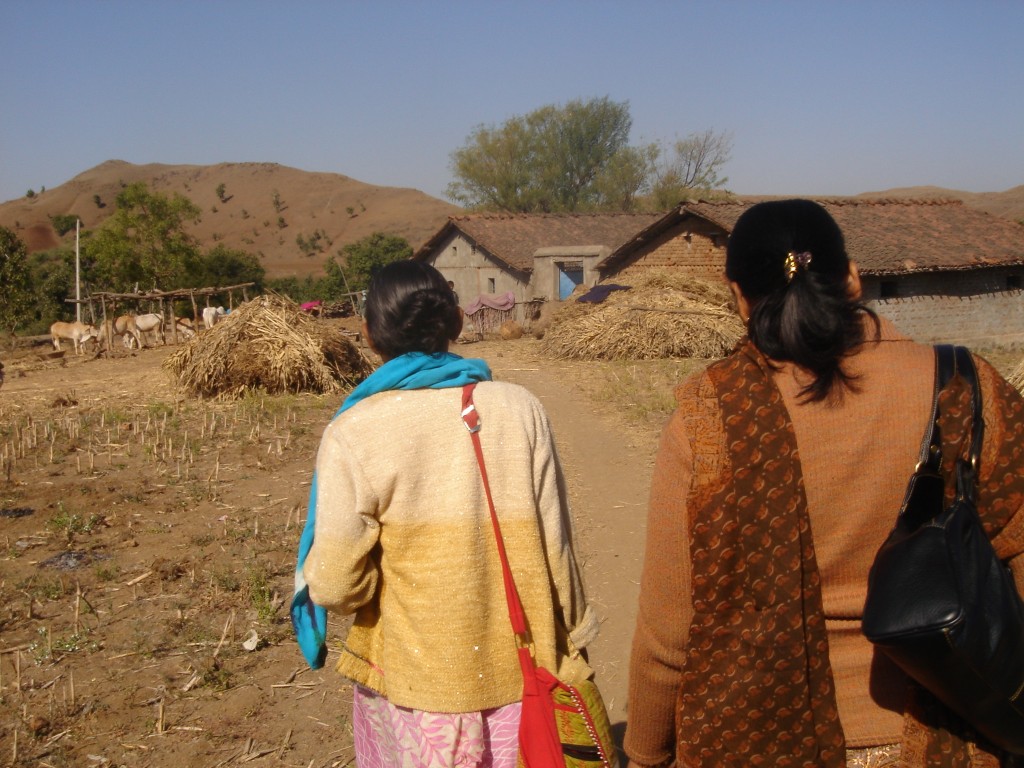 photo: RMF staff in the field

I have now been here more than 15 days, and I can ay that I have not felt the need leave early again even if I admit there are several things I miss. I think that little by little I am falling in love with this country. If I had to choose something, I would just choose the PEOPLE. I have been in touch with native tribal people, the poorest of the poorest economically, but the richest in the World in many other aspects. I am feeling things I would never expect before reaching this land. They are the most pleasant people I have ever met, children, adults, elderly men and women, who having nothing but give everything.

I have also had the chance to get to know one of the local schools closely. I love to sit down and look around; everything is so different compared to our western culture! The students, especially the younger ones, have stolen my heart. How tender they are! In this remote area of the World I have not seen any envy, laziness, jealousy, at least not by now. These people are a role model for everyone!

I am working as hard as I can, as my time in India is so short. I don’t want to leave the country without contributing to the improvement of something or someone, even if it is weak or insignificant. I came to give my best, in my own way or in theirs, at all costs; they deserve it. And honestly I think, even if I have only been with them for so long, Real Medicine is doing as much as possible to make my old dream come true, as the enthusiasm, the efficient working practices and the energy of the staff are boundless!