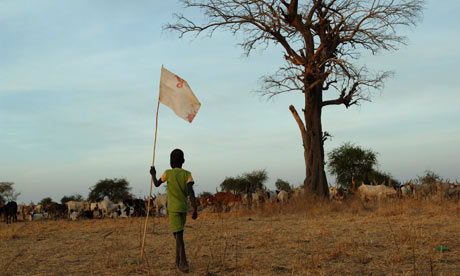 “There is still a great need for programs that harness the local human resources available to provide real solutions that help Southern Sudan move towards independence from the North.”–M. Lear, RMF Sudan

Working with the Government of Southern Sudan, Real Medicine Foundation has helped to establish the first College of Nursing and Midwifery in Southern Sudan with the support from the World Children’s Fund, The UNFPA, The WHO, St. Mary’s Hospital, Isle of Wight, and the Japanese International Cooperation Agency (JICA). Learn more about Real Medicine in Sudan

Voters in Sudan have cast their ballots on the opening day of its first multi-party elections in 24 years.

The BBC’s Will Ross visits a polling station in Juba, Southern Sudan

Presidential, parliamentary and state assembly polls are being held over three days under the deal that ended the war between north and south Sudan.

But several key parties and politicians opposed to President Omar al-Bashir are boycotting the vote amid fraud fears.

BBC Africa editor Martin Plaut says that a picture of confusion and disarray is beginning to emerge.

He reports that while the process generally went well in the capital Khartoum, in the rest of the country the very opposite was frequently the case. In several states from the Red Sea in the north to the far south of the country, voters had little chance of exercising their democratic rights and the dominant southern party is calling for a four-day extension of the vote.

Sudan has seen little peace since independence in 1956 and to hold an election as complex as this one, in a country so underdeveloped, was always going to be a tall order, our correspondent says.

The authorities will have to strain every nerve if these problems are to be resolved in the time that remains, he adds.

For many in Southern Sudan, these elections are a prelude to a referendum next January on possible independence.

The elections are also complicated by the ongoing low-level civil war in Darfur, where some three million people are living in refugee camps.

The BBC’s Mohamed Khalid, in the Darfur city of Fasher, says the turnout was surprisingly high there amid tight security, but there were no reports of any rebel attacks.

Local election monitors in Khartoum reported that some election officials were going into polling booths with voters and instructing them to vote for President Bashir.

The National Elections Commission had insisted that the three days of voting would be free and fair.

But this failed to convince the parties opposed to President Bashir, who pulled out in protest at alleged plans to rig the vote.

President Bashir needs a democratic mandate since being indicted by the International Criminal Court for alleged war crimes in Darfur, says the BBC’s James Copnall in Khartoum.

The boycott by his two main challengers mean he is favourite to be re-elected but is likely to reduce that mandate, our correspondent says.

Former US President Jimmy Carter is leading one observer mission.

“It’s not going to be a perfect election – there are no such things,” he said in Khartoum.

“But if we feel that in the elections the will of the voters has been expressed adequately then that would be the primary judgment we will make.” 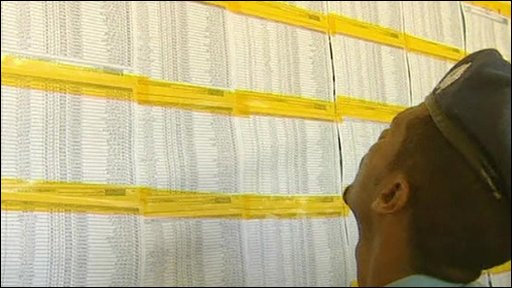 The polls are extremely complicated – all the more so because the names of those who have withdrawn over the past two weeks are still on the ballot papers.

“I am voting for SPLM’s Yasir Arman for president of Sudan,” Elijah Garang told the BBC at a cattle camp outside Juba.

“Even if he has withdrawn, he is my candidate and I will vote for him.”

The elections are also a huge logistical challenge for a country where where the infrastructure is poor.

In Southern Sudan, which already has considerable autonomy, 12 separate elections are taking place – for regional representatives, as well as local and national ones.

Southern Sudan President Salva Kiir had to take a seat and wait for half an hour while the cardboard voting booths were set up at a polling station in central Juba.

Under the gaze of international observers, Mr Kiir spent 20 minutes casting his votes.

He put one of his ballot papers in the wrong box, Reuters news agency reports.

“I have voted and there was no problem,” he said. “I’ve never voted in my life. I hope it will be the formation for a democratic process in south Sudan.”

Many in the south are already looking beyond these elections to next January’s referendum, when southerners will vote on possible independence.

The north-south civil war ended in 2005, with a deal for the Sudan People’s Liberation Movement (SPLM) to share power with Mr Bashir’s National Congress Party nationally, while run affairs in the south on its own.

President Bashir has said he will accept the referendum result, even if it favours independence for the south.

However, the country’s oil fields lie along the north-south border and some fear that an independence bid could lead to renewed conflict.