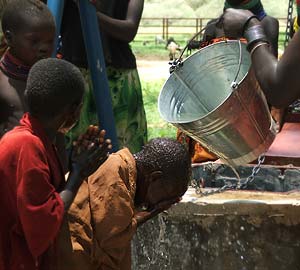 RMF’s Michael Lear is in the arid Turkana district of Northern Kenya trying to find the best way to help the most people get clean drinking water.

Like so many areas, the Turkana district has suffered the same hunger and thirst for longer than most would like to remember. And with rain becoming more and more scarce with each passing year, faith in the future is becoming equally hard to come by here.

Here is a video that touches on the desperation these people are feeling: Millions face starvation in Horn of Africa

As the video explains, these villagers rely exclusively on international aid and with the financial crisis slowing down funds they have been without food now for two months—and they do not know why.

So far, Michael has  promise in local projects by Love Mercy and Bethany House that are both helping people in spite of all odds.

Our goal is that we will be able to set up a system here so that for some, this will be the last time they will feel the pain that they have been living with for so long. Our hope is to have a high and lasting impact that carries over well into the future.

We are still looking for the best way to move forward in the area but we know time is short and often too late for many. Every day new stories of sorrow come out of this area as the people here wait for help from above–be it rain or international aid.

But, you can help them with us. Help us show them that all is not lost and that there are people out there who will not turn a blind eye to their pain. You can make a difference in this world for the better.

Recent news from the area:

The following excerpt is from: KENYA: Water shortages lead to cholera outbreaks

NAIROBI, 10 September 2009 (IRIN) –Cholera, measles and polio outbreaks are ongoing in parts of northern Kenya due to a water shortage brought on by drought, and an influx of Somali refugees in the east, say officials.

"The worry is [that] they [Turkana residents] are using water from the Ferguson Gulf, in Lake Turkana, which is contaminated," he said. A broken-down water pump has been repaired to provide clean water. The area also has low latrine cover, contributing to improper waste disposal.

"Lack of water for Kalokol, Turkana, is the main driver of the disease," Kahi said.

Categories: Kenya Videos or View All
Return to Top