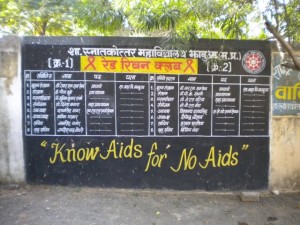 In Jhabua, Jimmy, Caitlin and Rajpal took part in an event organized by Jhabua College.  The event, which was standing room only with over 200 people, was attended by college students and the district Chief Medical Officer.   Rajpal, President of the Jhabua Network for People Living with HIV/AIDS (an organization which RMF supports) was the key note speaker, making all of us proud as he stood up in front of the crowd and said "I’m HIV positive and look at me, I’m living a good life."  He went on to candidly tell the students how he contracted HIV and how after being diagnosed and starting ART treatment, he’s turned his life around.  He wanted to make the students aware that HIV is not a death sentence and that HIV+ individuals can live healthy, happy productive lives.  He also warned the students, that just because someone doesn’t look sick, it doesn’t mean they’re not HIV+, so that everyone should take precautions every time they have a sexual encounter, emphasizing condom use and treatment of STIs.  Rajpal patiently answered questions during the question and answer session and even after the talk when students lined up to shake his hand and ask more questions. 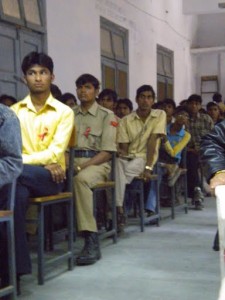 Jimmy also left the students wide-eyed as he gave them an impassioned talk about how HIV can happen to anyone if we do not take the right precautions.  By giving the students examples from real-life cases of people their age contracting HIV, Jimmy certainly woke up the audience and then hit home with practical advice on how they can take precautions against HIV and where to go get testing.

Our event in Jhabua was a complete success, with a room full of young adults leaving with information on HIV/AIDS prevention and testing and with many stigmas shattered as they met the charismatic, HIV+ Rajpal.

Simultaneously Shalindra and a handful of members of the Jhabua Network for People Living with HIV/AIDS traveled to Alirajpur to attend a rally with over 200 students and the district collector.  They were impressed by the students desire to learn more about HIV and the lack of stigma present towards HIV+ individuals.

Ajana was also busy meeting with a group of high school girls in Thandla block.  Here, with just girls present, Ajana was able to speak openly to the girls and receive questions that they may have been to shy to ask in front of a large group of boys and girls.

Our World’s AIDS Day activities were extensively covered by local press, articles which we’ll scan and post as soon as there’s electricity!