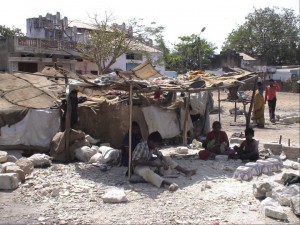 The Asian Legal Resource Center (ALRC), a human rights organization with a General Consultative status with the United Nations’ Economic and Social Council, has pointed out conditions of mass deprivation, especially hunger, malnutrition and distress migration, in Madhya Pradesh in its country report on India to the UN Human Rights Council.

The report, expressing concerns over the right to food situation in India, points out the shocking state of affairs in Madhya Pradesh regarding several human development indicators, especially malnutrition among tribals.

According to the report, Madhya Pradesh carries a disturbing tag of being one of the biggest contributors to neo-natal and child mortality in the world. Laying special emphasis on tribal communities, the report states that the mortality rate among children under the age of five in the state’s tribal community is far higher than the state and national average.

The chance of survival of a tribal child is low, with 71.4% of tribal children being malnourished and 82.5% of children being anaemic, says the report. The report points out that in the last three months, 43 children have died of malnutrition in three tribal villages in Madhya Pradesh.

Since 2009, the ALRC and its sister organization, the Asian Human Rights Commission (AHRC), have been reporting on the situation of child malnutrition and its causes focusing on four tribal districts – Khandwa, Rewa, Sidhi, and Jhabua in Madhya Pradesh.

The report states that while 67% of the people in Madhya Pradesh live below the poverty line, 60% of the children are undernourished and 73.9% of tribal women are anemic, the budget for health services accounts for merely 2.4% out of total state budget.

“One bed is available for every 2,425 persons in hospitals, and more than 1300 out of 5005 doctor posts remain vacant. Although child malnutrition has increased over the last five years, not one Primary Health Center has been built and 1,659 out of 4,708 medical officer posts remain vacant at the Centers,” says the report.

Madhya Pradesh has repeatedly been in news for severe acute malnutrition among children and other distress conditions like loss of livelihood and cases of human rights violation. The Hindu has reported high incidence of malnutrition and deaths caused by it over the past six months, primarily from the Jhabua, Rewa and Khandwa districts of the state.

The National Family Health Survey -III (NFHS) has also brought out the grim public health situation in the state. According to the NFHS-III, 60 per cent of the children in the 0-3 years category in Madhya Pradesh are malnourished, with 82.6 per cent children in the same age group being anaemic.

The less than satisfactory functioning of the state Women and Child Development Department (WCD), visible in the poor performance of Anganwadi Centers (AWCs) in addressing malnutrition in rural areas, has only aggravated the problem.

The Nutrition Rehabilitation Centers (NRCs) in the state, run with technical assistance from UNICEF, are plagued with problems like staff shortage and infrastructural lags, making them ill-equipped to fight the problem of rural malnutrition.