On the Road: What a Day 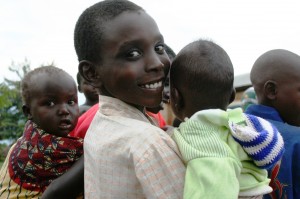 Not sure if I have the right words to describe this humbling experience and very full day, but I’ll try… This was all on the first of three days of my visiting the Kiryandongo Refugee Settlement in Uganda, where RMF manages a broad initiative with the help of generous funding from the World Children’s Fund (WCF).  Kiryandongo, like a lot of refugee camps/settlements, is run by the UN refugee Agency (UNHCR), and caters to refugees from the recent wars and unrest in Kenya, Sudan, Rwanda, the Congo as well as Ugandans displaced by flooding.

Our initiative works to fill the gaps in aid and resources to the camp that the UNHCR is unable to, which right now consists of supplying and supporting a primary health care clinic, supporting over 600 Kenyan and Sudanese school children, and an acupuncture program to help treat post traumatic stress disorder. 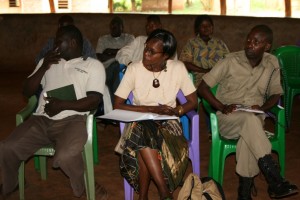 Straight into a community meeting

We had arrived the night before to the closest real town near the settlement after a long and occasionally very hot and bumpy 8 hour drive from Tororo. The day started right away with a formal meeting in a huge circular thatched roof building in the settlement with all the stakeholders involved: community leaders, head of each refugee group (Sudan, Congo, Rwanda, and Ugandan) teachers of nursery, primary and secondary school, UNHCR, Office of the Prime Minister, with Charles (RMF field coordinator) and I sitting in the front facing the entire group.

I was a little surprised by the size and seriousness of the meeting which started by going around the room one by one with each person welcoming me, describing how much had been done for them by RMF, and their hopes for future projects we might contribute to.  I definitely wasn’t prepared to be doing this first thing upon arrival, as I initially thought I would just casually familiarize myself with the project, do some tours and have a few casual one on one meetings…this was not at all what was planned as I was about to discover! 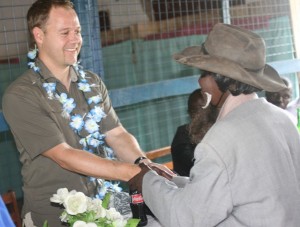 As I listened for over an hour to each person’s heartfelt gratitude and requests on behalf of each group they were representing, it became increasingly clear with each story that there were still huge gaps in aid and resources to enable these people to put their lives back together again.  I suspect this is fairly normal situation in a refugee settlement of over 5,000 people (which is actually small by UN standards), which is essentially trying to function as a self contained town….an enormous number of things that need to happen for this to happen, maybe it never does.  From expanding school programs to the many children who still weren’t able to pay fees, to programs such as vocational training, income generating or microfinance initiatives to help people become self sufficient were just a few of the things mentioned.

These were proud people, and were genuinely looking for ways to support themselves again. At the end of the hour of going around the room, Charles tells me I am expected to speak to address the group about what I had just heard from everyone, which was unnerving to say the least, with them hanging on my every word and me still getting my head around the 6 pages of notes I had just scribbled down.  I decided to keep it short and not get myself in any trouble…I thanked them for the warm welcome, and let them know I was there on behalf of RMF to listen to their situations, learn and tour our initiatives, bring my findings back to the US and hope to address some of their concerns over the coming year.   This was greeted with warm approval and I breathed sigh of relief. 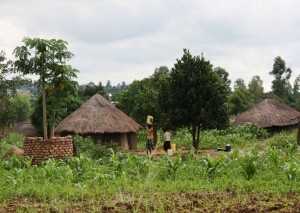 Deeper into the settlement

The meeting wrapped up after a couple of hours, and we all drove deeper into the settlement, and I again realized I had misjudged and that my imagination of what a refugee settlement would be like was obviously confused with the difference between a “camp” and “settlement”.  This was a “settlement”, and is absolutely enormous, something like 12 squarekilometers, and each refugee family gets a plot of land to build a home and farm some land.

I had been picturing a fenced in, crowded tent camp, the kind you see on CNN during war reporting…this place was filled with rows and rows of corn as far as the eye could see and little thatched roof circular brick huts with families spread fairly far apart.  The settlement continued off into the distance past rolling hills and further than I could see.  So while these people were in most cases very poor, they at least had their own plot of land, and homes that the Ugandan government allows them to keep in their family for 100 years. 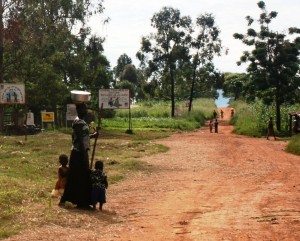 Next stop for the day was the primary health care clinic that we supported, a five building complex complete with a general clinic, Maternity Ward, Children’s ward, Women’s health center, lab/blood testing, and a medicine dispensary.  Everything in the clinic compound was freshly painted, clean and orderly, and nicely manicured grounds.  I was told it looked like it would be a slow day for them, and by slow day they meant there were only 50 people waiting in line instead of 100!  More on the clinic later, as I did another tour the following day.

We returned to our hotel for a quick lunch and were told to return for my “welcome reception” at 2 o’clock.  As we were driving out of the settlement we passed a group of women dancing and singing in unison, as I fumbled with my camera bag to take a photo, Charles told me not to worry, I’d see plenty more of that later as they were practicing for me…this was going to be interesting. 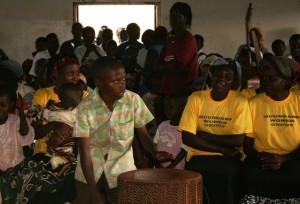 Returning to the camp after lunch, we drove to a different area of the settlement, where the secondary school was located, and parked in front of the performance hall which was already filled with people.  It was threatening to rain so they had decided to hold the reception inside.

As I got out of the car, two young girls ran up and grabbed my hand and pulled me towards the doorway while a group of a dozen women dressed in bright yellow slowly filed in behind me and started singing beautifully, Charles told me it was their welcome song and I was sang and danced all the way inside to sit at a table in the front of the hall. There were already a couple hundred people packed inside waiting, and as I was walked in by the two girls they all stood and cheered and clapped.  This was really too much and I was definitely not feeling worthy of all this attention, I smiled humbly, felt like I was having an out of body experience, and was escorted to my chair with a swell of singing. 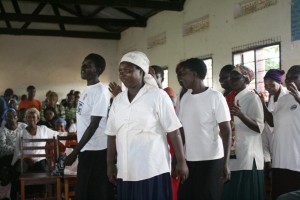 The next hour was the most amazing and deeply moving display of gratitude and warmth I am sure I will ever see….A dazzling variety show of singing, dancing, little performance plays and poetry.  From 3 year olds to 80 years olds, all ages were represented.  Each group, the Congolese, Sudanese, Rwandan, and Ugandan, all had very distinctive different singing and dancing styles.

My favorite one musically was definitely the Congolese which had a great driving drum beat kept by a 10 year old, and the dancing award definitely goes to the Sudanese women with crazy swaying leg movements I can’t really describe. What was also really amazing is that almost every group had also written a special song about RMF, and I was really glad I had been asked to bring a video camera and was recording as much of this incredible event as I could.  They also put on little plays where both Charles and I were represented, plays about troubled teens, and plays about the role of education with their small children.

Far and away the cutest performance was the three four year olds enthusiastically reciting a short poem about education and RMF! I’m really hoping that part of the video comes out well. At the end of all of the performances over two hours later, it was of course, speech time again.  We listened for about an hour of speeches from all of the school teachers and principal about RMF’s and WCF’s school support and everyone’s hope for the future. 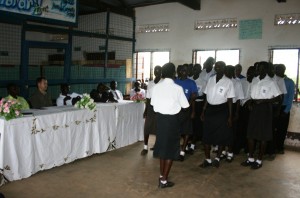 Again I could tell I was expected to finish it all of by addressing the now close to 500 people gathered….not exactly comfortable with public speaking before an enormous group of expectant strangers, but really moved and a bit choked up, I thanked them deeply for the welcome and the incredible show, told them how much my heart had been filled, how proud they should be of their children, and how I would bring back this joy I felt to our organization and anyone that asked me about Africa.

I’m still a little stunned by the whole experience, being fairly new to RMF, I certainly didn’t feel worthy of this level of gratitude but was glad to accept on behalf of the people who had made it happen. It is truly amazing to witness in person what RMF and WCF have achieved together for these very thankful people in the past two years here. 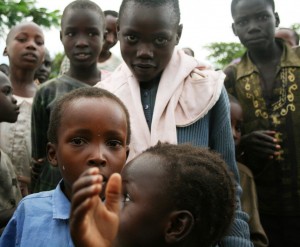 Categories: Uganda Voices from the Field or View All
Return to Top