As the referendum gets closer for Southern Sudan in January of next year to gain independence from Northern Sudan, our new Nursing & Midwifery College in Juba, awaits the results anxiously. The College will be closed between November 15th and January 15th to allow students and staff to safely register to vote and return home to await the results of the election. 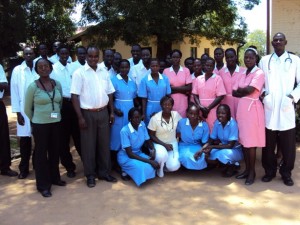 photo: The Nursing & Midwifery students with the staff of College and RMF project manager

Our partner in this initiative at the UNFPA in Sudan sends us these weekly media summaries as everyone prepares for the voting:

Below are series of short articles written regarding Senator John Kerry’s involvement and the Obama administration’s stance on the upcoming elections.

CPA partners receive Obama’s road map
Al-Rai Al-Aam 8/11/10 – The Sudanese Government is currently studying phased proposals conveyed by Chairman of the Senate’s Foreign Relations Committee John Kerry to lift sanctions imposed on Sudan, to write off debts and to remove Sudan’s name from the terrorist list in exchange for NCP’s concession on the Abyei territory.

Sources said the Government told Kerry that it had agreed to the South’s self-determination in return for peace and is ready to accept the referendum result but it would not make concessions on Abyei.

AFP 7/11/10 reported that US Senator John Kerry said during a visit to Sudan on Sunday that he delivered a roadmap aimed at resolving disputes between the North and South before a January referendum that may partition the country.

"President Obama offered a roadmap to solve Abyei and other issues," he told reporters of the disputed oil-rich region straddling north and south.

Kerry, who provided no details on the Obama proposal, met presidential aide Nafie Ali Nafie in Khartoum before leaving the country.

Sudan Tribune website 7/11/10 reported Kerry as saying “Sudan can find itself off the list of states that sponsor terrorism as early as July 2011 should it facilitate the self-determination votes in Abyei and South Sudan and recognize their outcome”.
The “Politico” magazine quoted unnamed senior U.S. officials as saying that President Barack Obama attached several conditions to the offer including that Khartoum facilitates the conduct of a transparent and on-time referendum on the status of Southern Sudan and respecting its result.

Additionally, Khartoum must implement "all appropriate post-referendum agreements – related to border agreements, currency, citizenship and other matters," to fulfill U.S. conditions to be considered for accelerated removal from the state terror sponsor list, the official said.

The administration proposal Kerry carried to Khartoum "decouples the state sponsor of terrorism issue from Darfur," a second senior U.S. official said Sunday. "But doing this in no way undermines the importance of the resolution of humanitarian and political problems that have plagued Darfur for the last decade. The comprehensive sanctions that have been in place [on Sudan] since 2003 and 2004 remain in place until we see a resolution of the Darfur crisis."

Obama’s offer moves up by at least six months the date by which Khartoum might come off the list. But the U.S. officials emphasized a final decision would still be contingent on Sudan halting all sponsorship of terrorism for at least six months before the July 2011 target date and pledging not to resume such assistance in the future.

"President Obama made clear in the proposal conveyed this weekend that if Sudan’s leaders take concrete steps to implement the Comprehensive Peace Agreement, including recognizing the results of the referendum in January, he is prepared to immediately take significant steps to begin to transform the bilateral relationship. This would be the beginning of a new roadmap for addressing key bilateral issues as post-referendum issues are resolved," he added.

Obama’s carrots to Khartoum may include more than just getting of the terrorism list. On Saturday Kerry met with Sudanese minister of Finance and National Economy, Ali Mahmood Hassanein to discuss the country’s $35.7 billion debt and ways to get a relief.

Sudan state media said that the US Senator promised the establishment of a committee comprising the Sudanese and US sides to deliberate and arrive at a resolution to Sudan’s foreign debts.

A well-placed source in Khartoum told Sudan Tribune on Friday that Western diplomats in the capital believe that Kerry may also offer U.S. support for deferring the arrest warrant against Sudanese president Omer Al-Bashir through the UN Security Council for one year that can be renewed indefinitely.

But U.S. officials today emphasized that separate U.S. sanctions imposed over Darfur — which Obama extended for another year on Nov. 1 — would remain until Khartoum improved conditions in the region, where the United Nations estimates up to 300,000 people died following a revolt in 2003, they said.

"Those … sanctions remain in place and they are the ones that have a significant effect on Sudan’s economy and on the government of Sudan itself," said another official, who added that future steps such as debt relief and an exchange of ambassadors would all depend upon progress in Darfur.

Real Medicine Foundation, in collaboration with the Government of South Sudan, the UNFPA, the WHO, St. Mary’s Hospital, Isle of Wight, and the Japanese International Cooperation Agency (JICA), and in partnership with and with financial support from World Children’s Fund, is establishing the first College of Nursing and Midwifery. The consortium aims to provide a scalable working model for this college that will offer a 3 year diploma for Registered Nursing and Midwifery and may be extended to other strategic locations within the country.