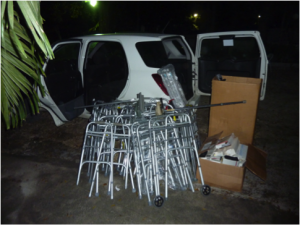 Much-Needed Rehab Equipment Obtained through Portlight.org
We made a great connection tonight with a supplier from Portlight.org working out of Quisqueya University.  The school was shut down after nearly all of its building collapsed in the earthquake, but it is currently being used (along with the other Quisqueya schools) as a staging point for relief operations.
As mentioned in the previous post, our partner, Sacred Heart Hospital, has been inundated with amputees for weeks without the proper human or physical resources to treat them.  In our efforts to get help with supplies, one of our contacts here in Port-au-Prince Tweeted a request for physical therapy equipment (crutches, walkers, etc) on our behalf, setting the process in motion early this afternoon.
Two hours later through the help of Twitter users all around the world, we were sent word of Portlight’s supply of rehab products located less than five minutes from our location at the hospital and ready for distribution.  After a simple phone call, we had setup a time to meet their coordinator, Richard Lumarque, fifteen minutes later for pickup and were on our way.  With a little help from Google Maps, Mel (physical therapist) and I made it to Portlight’s depot at Quisqueya before sundown and were reviewing inventory with Richard for receipt.
Soon we had stuffed my small SUV rental from Avis full with a three-wheel walker, 23 walkers, some crutches, two boxes filled with platform attachments used for complex mobility needs and a load of neck braces.  The equipment was added to the supply room at Sacred Heart, set to be handed out to the 50+ Sacred Heart amputees who have been bed-ridden since January 12th.  Mel estimated the equipment to be worth roughly $5,000—a big score for the community at Sacred Heart, waiting to walk again.. and not bad for two hours of effort.
Many thanks to Richard Lumarque, Portlight.org, and the Twitter community for making it happen. 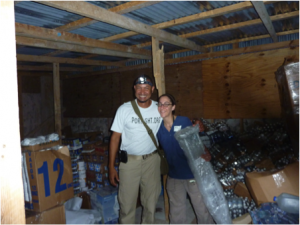 photo: Mel with our impromptu supplier, Richard from Portlight.org 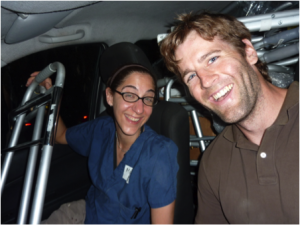 photo: Mel and I after loading the car full of rehab equipment for her clients at Sacred Heart. 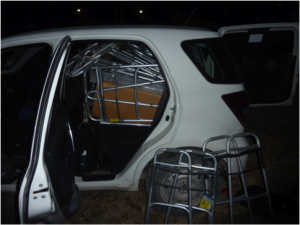 photo: The car, stocked nearly to the brim. 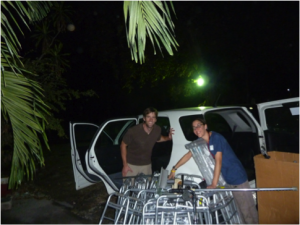 photo: Unloading at the hospital after close.