Japan: Bringing some closure to our Earthquake and Tsunami Relief projects

In closing out our Tsunami/Earthquake relief project in Japan, our partner in Japan, JEN (Japan Emergency NGO),  interviewed a couple at one of the Community Gathering Centers and Shelters that we supported.  Mr. Ryozo Sanjo (73) and Mrs. Kieko Sanjo (69) , are residents of Oppagawa Kasen Transitional Shelter.

Q: At first, could you please introduce yourselves briefly?

A: Now, my husband and I are living in a temporary house. Before the disaster, we used to live in the Nagatsura area in Ishinomaki city. My husband retired a few years ago from a plywood company after 30 years. However, from time to time, he used to go and help the company and have a small income. I used to give care to my mother, who died after the disaster at the age of 98, and do farm work. We had two sons and they had their family with three children in total. 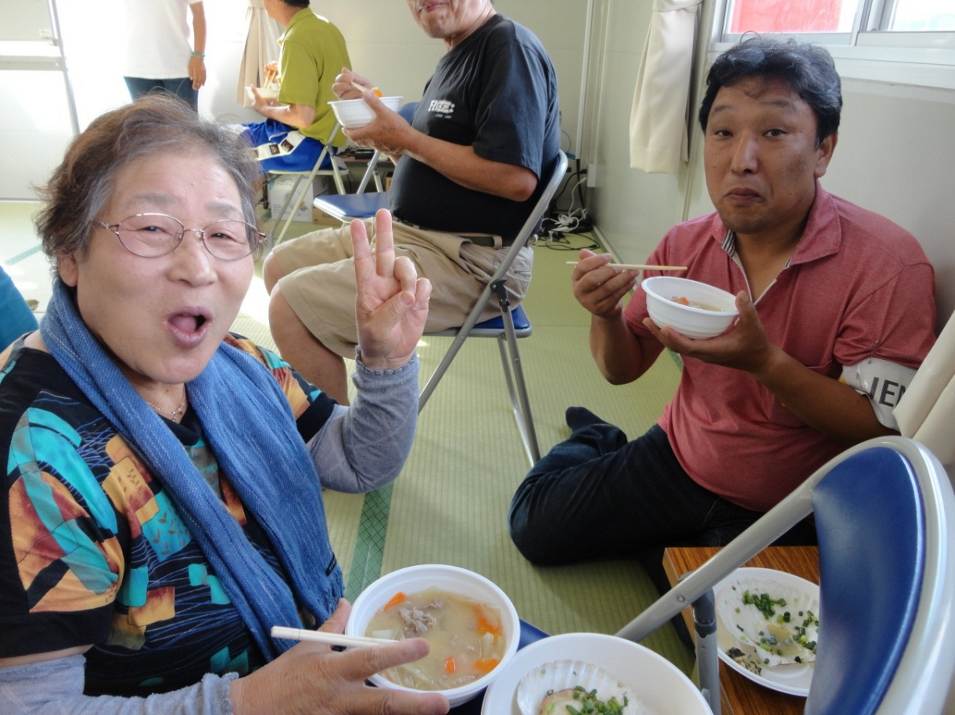 Q: Please tell us your damage you suffered from the disaster and the situation at that time.

A: After the earthquake, my husband and I were engulfed by the tsunami because we stayed home. We came up to a very small space near the ceiling and took a breath. We managed to drag ourselves on to the second floor. We tried to protect us against the cold by wrapping curtains and blankets around our wet bodies. Our house was completely destroyed.

I blamed myself. Why did elderly people like us survive and did the young people die like our daughter-in-law and grand-sons who would open the way to the future? I can’t stop regretting what happened. 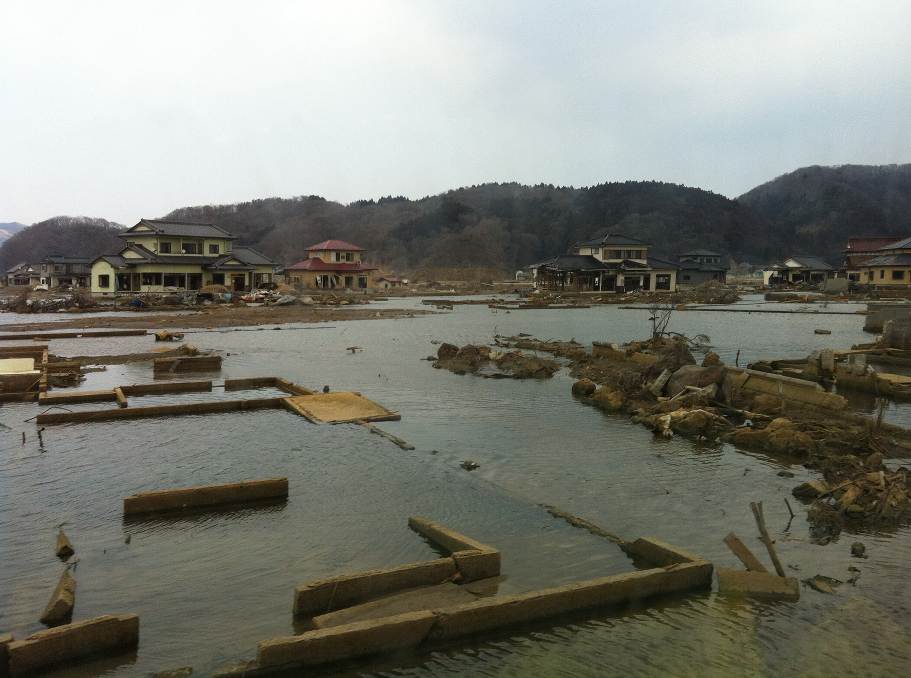 The Nagatsura area, where Mr. & Mrs. Sanjo used to live, was a  nice residential area  before the disaster. However, it became uninhabitable due to the land sinking after the Tsunami.

Q: How long have you been participating in Community Café?  Are there any changes with you because of the participation?

A: Maybe, I’ve been participating since the end of the last year. When I stayed home, I had nothing to do other than bringing back to memory of the disaster and our grand-sons. It was painful. Tears welled up in my eyes everytime I saw other children in the same generation of our grand-sons who died. Even right now, I am tearing if I just recall them. So when there were some events in the community hall, I always tried to participate in them to distract myself.

Although different people came to different events, there were some people who I met in every event. I became friendly with them and now they become the source of my energy and give me moral support. I’ve been so healed by them that I can’t find any words to thank them well. Their support gave me a sense of peace and I was able to be more positive.

Since around the last spring, I was thinking whether there was something I could do for other people, because until then I had always received goods and sentiment from others. And I decided to express my feeling such as “I’ve gotten well now. Thank you very much for your support” through my hobby, handicrafts. Now, I am teaching handicrafts as volunteer activity at the transitional shelter where I am living and other two places.

Q: Do you have any plan for the future?

A: Fortunately our new house will be built around in the next summer, although it will not in Nagatsura area where I used to live. My husband likes very much fishing because he used to be a fisherman a long time ago. But he lost his fishing tackle by the tsunami. So, he is looking forward to buying a new one when the new house will be completed, because we don’t have any space to put such things in our current temporary house.

After we will settle in our new house, I am going to start a handicrafts class as professional activity, not as volunteer. I am planning to have a tea party to invite the volunteers who helped me out. I am so much looking forward to our new house.

We’d like to thank JEN for being such a wonderful partner in Japan and wish them all the best in the longer term rebuilding projects that they are still supporting.

To learn more about all of the relief work we supported over the past year and a half in Japan please visit our Japan Initiative web page.

If you are interested in donating to RMF so that we can continue to remain poised and ready to provide both short and long term disaster relief, please click here

Categories: Disaster Relief or View All
Return to Top