Haiti braces for heavy rains, refugees have nowhere to go

Haiti is bracing itself for Tropical Storm Tomas and the heavy rains that are due to follow.  Refugees are being advised to leave the tent camps but have nowhere to go. 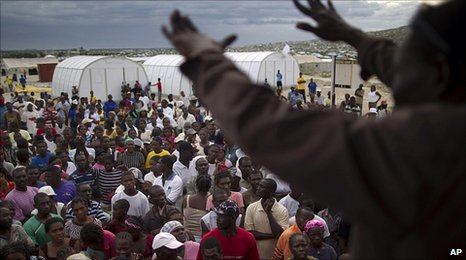 Haiti has been placed on high alert as a powerful storm sweeps in, threatening thousands of earthquake survivors still living in camps.

Emergency supplies and equipment are urgently needed in preparation for Tropical Storm Tomas.

As of 3 November, the Ministry of health (MSPP) reports 442 deaths and 6,742 hospitalized cases from cholera. Five departments have been directly affected by the cholera: Artibonite, Centre, Nord, Northwest and West. Departments which have not been directly affected are: Grand-Anse, Nippes, Nord-Est, Sud, Sud-Est. Based on the latest trajectory of Tropical Storm Tomas, the DPC has encouraged populations living in camps and low-lying coastal areas to seek alternative shelter, if possible, with family or friends.

The humanitarian community is continuing preparations for the storm. Evacuations of the most vulnerable camp residents in Port-au-Prince are currently ongoing to safe locations. Water is being delivered to populations most at-risk of a storm in Port-au-Prince and tarps and tents are in stock to cover the needs of 300,000 individuals. Food stocks are already in place and coordination of logistical assets and personnel is ongoing. Community promoters have reached 12,589 households today and 120,000 text messages were sent to camp residents.

For the cholera response, food distributions reached 1,785 beneficiaries in the Artibonite Department and sensitization campaigns continued for populations in the most affected areas. Training of medical staff andcommunity agents is ongoing, especially in places which have not yet been affected by cholera.

For more information about our initiative in Haiti please click here

Categories: Disaster Relief Haiti In the news or View All
Return to Top