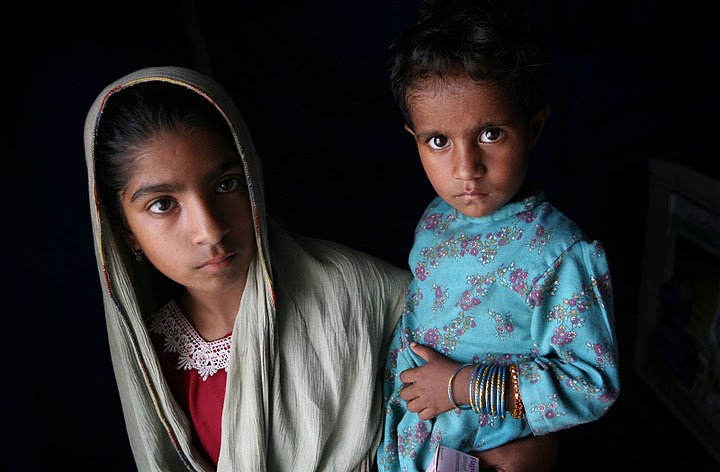 From Growing up scared in Peshawar, CNN.com:

Peshawar, Pakistan (CNN) — Zara brushes her dark brown curls away from her face, nose scrunched up in concentration as she stares at the white board. She looks down to write and then pauses, placing her little finger on her chin in contemplation.

Like a typical 7-year-old, her favorite part about school is the games.

"Hide and seek," she says in English, giggling sheepishly. "I like hide and seek."

But no matter how hard she tries, there are some things this little girl and her friends can’t hide from.

"I am scared from the bombs," she sighs. "I am very afraid."

Zara lives in Peshawar, capital of Pakistan’s Northwest Frontier Province, tucked right up against the Khyber Pass next to Afghanistan.

When the Pakistani military began its multiple offensives targeting its own homegrown militant networks in the tribal belt, the retaliation was felt in Peshawar. It was the residents of this ancient city of 3 million who bore the brunt of an ongoing brutal bombing campaign.

Suddenly nothing was safe. People’s lives were shattered as the city found itself at the very core of Pakistan’s war on terror. A truck bomb in a popular marketplace frequented by women and children killed more than 100 people.

Checkpoints sprang up all over the city, meant to instill a sense of security. But at the same time they created targets of opportunity as they and government buildings were regularly attacked.

Zara’s school is tucked way down an alley off what once was Peshawar’s most popular modern market street. Just out front sits a checkpoint.

These days her school door remains bolted, the bus drivers act as additional guards and parents are discouraged from coming. The school administration wants as few adults loitering around as possible, afraid of suicide bombers.

But there is little the school can do to keep the children safe from the demons that haunt them.

"When there is an explosion," Zara says, pausing before she continues, "it feels like the Taliban are here. I imagine corpses are all lying on the ground."

Her eyes widen and she giggles.

She may be laughing, but psychiatrists say it’s deadly serious: The children are confronting a faceless and unknown enemy.

"The exterior smile is a deception; it’s the only coping mechanism the child has," Dr. Rizwan Taj, a psychiatrist in Islamabad, says. "The child needs counseling, protection, and they are not getting that."

The children simply don’t understand why their little world has been affected. The problem is, Rizwan explains, the parents can barely cope with the paralyzing fear that defines their lives.

At Zara’s school we also meet 10-year-old Qainat. We ask her what she likes to do.

"I like to do painting and I like to …" she pauses and looks away. "But I don’t like America because she is so bad, and also India."

She says it’s what her parents are telling her, explaining that the Afghan refugees who have lived in the city for decades aren’t responsible.

Having children growing up in such an intense and charged atmosphere surrounded by so much violence can have detrimental effects on society.

"You will have a very insecure population, a population that can be easily polarized," Rizwan says.

He says it’s going to take a collective effort from the government, the media and the international community to prevent Pakistan’s next generation from being a lost generation materializing into a dysfunctional society.

But Pakistan’s medical services are already stretched to the limit. So for the time being, Zara and her friends are left to their own devices, trying to survive in a world their elders can’t even make sense of — carrying with them the knowledge that each day could be their last.

Real Medicine in Pakistan: RMF’s clinic is in Northwest Frontier Province and Peshawar is the capital of NWFP.