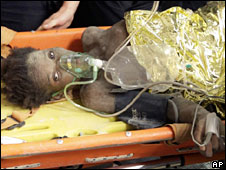 Darlene Etienne was found when neighbours heard her weakly calling

Darlene Etienne was pulled, barely alive, from the wreckage of a house near her college in Port-au-Prince, 15 days after the earthquake struck.

Rescuers said the 16-year-old, who was severely dehydrated and covered in dust, possibly survived by drinking bathwater but could not have lasted much longer.

She was found when neighbours heard her calling weakly from the rubble. A French rescue team took an hour to dig her out.

After being given oxygen and water, Darlene was taken to a French medical ship for treatment for dehydration and a leg injury.