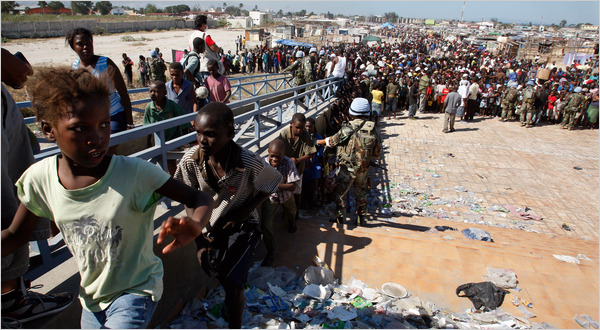 PORT-AU-PRINCE, Haiti — More than two weeks after the earthquake that devastated much of this country’s southern half, the capital remains a city of teetering walls, dangling electrical wires and precariously balanced heaps of jagged cinder block and wrought iron, all rattled daily by aftershocks.

Bulldozers and excavators are few and far between. Even as tent cities here swell, aid groups say an estimated 10 percent of the city’s residents (a number that may be vastly understated) are camping in yards and streets next to their homes, marking off what they hope is a safe distance in case the structures fall in the next aftershock. Others trek by daily to see if their houses are still standing and wonder if they will ever be able to move back in.

“It’s dangerous, but what can we do?” Orpha Brinach, 38, said after a night on a mattress in a narrow street lined by damaged homes. “We can’t go to the tent cities because robbers will steal everything we have.”

Along the ravaged main commercial strip, vendors hawk goods as people claw their way into demolished stores in the shadow of wobbly buildings that appear ready to crumble at any moment. Low-flying military helicopters cruise overhead, spreading fear on the ground that the jarring rotors will give wounded buildings’ their final blow.

John Henry Telemaque, assistant coordinator for education for President René Préval’s emergency disaster committee, said that perhaps up to 97 percent of the city’s schools — built to withstand hurricanes, not earthquakes — had been destroyed, and that the dead within were still being counted.

At the National Laboratory for Buildings and Public Works in Delmas, Raymond Hygin, assistant director of public works for engineering, pulled out a two-inch-thick stack of inspection documents for the 112 standing buildings that had been checked and ordered demolished. The number actually taken down: zero. “When we will begin to demolish, we couldn’t tell you,” he said. “First we have to continue our evaluation.”

The agency has six inspection teams and is working with outside groups, including a French-based nonprofit organization called Emergency Architects, to bring in more.

Mr. Hygin’s inspectors began work on Monday, delayed, he said, because many of them lost family members or their own homes in the earthquake.

In Delmas, the top two floors of a pastel yellow apartment building collapsed onto the two lower floors, crushing them, and now lean precariously over a busy road. A spray-painted sign reads “À démolir” (“demolish”), with the agency’s initials and a large X circled in red. In another part of the city, Pont Morin, cracks gape on a nine-story telecommunications building in a residential neighborhood that bears no sign of having been inspected.

With damage stretching into every section of the city, the task for inspectors seems endless. But Mr. Hygin set a target of three months. “It is optimistic, yes,” he said. “But we will try.”

The International Medical Corps, a California-based nonprofit organization that is running the general hospital here, said it had not seen injuries related to new collapses. But a spokesman for the organization said a team from another group, the Brooklyn-based Bedford-Stuyvesant Volunteer Ambulance Corps, reported recovering the bodies of four people on Tuesday — some of them children — who were crushed in the collapse of a four-story building after an aftershock.

“It was a pretty dramatic story, because the rescuers could hear kids crying and banging,” said the spokesman, Tyler Marshall. “They apparently died during the attempt to remove the rubble.”

The capital’s electrical system is also a work in progress. Col. Rick Kaiser of the United States Army commands an engineering brigade for the military’s Joint Task Force Haiti, which has been helping restore vital infrastructure. He told reporters this week that restoration of power could still be a few weeks away.

The slow clearing of rubble, meanwhile, is setting off a new round of mourning for many families and the appearance of bodies on the street. This week, men working to clear debris from a hardware store found the body of a young child, missing a leg and an arm and wearing only green shorts, by a nearby telephone pole. The men said they did not know where the body came from. One started crying, a rare release in a city grimly stoic about the overwhelming loss of life.

But on Wednesday, there were more tears. As government and aid workers cleared rubble from the collapsed Ministry of Education, the building’s caretaker was found. The work ID in his pocket said Benjamin Sius. Family members who came to collect the body wailed on the street outside. A sister, Elsia Sius, said he supported the whole family and paid for school for her three children.

“I’ve lost my brother,” Ms. Sius mourned. “I have nothing left.”

PORT-AU-PRINCE, Haiti (AP) — A 16-year-old girl pulled from the rubble more than two weeks after a deadly earthquake was in stable condition on Thursday, able to eat yogurt and mashed vegetables. Doctors said her survival was medically inexplicable.

The girl, Darlene Etienne, was rescued a day earlier from a collapsed home and was being treated on the French Navy hospital ship Sirocco, anchored off Port-au-Prince. Her doctor, Evelyne Lambert, said she had a 90 percent chance of survival.

She may have had some access to water from a bathroom of the wrecked house, and rescuers said she mumbled something about having a little Coca-Cola with her in the rubble.

Categories: Haiti In the news or View All
Return to Top