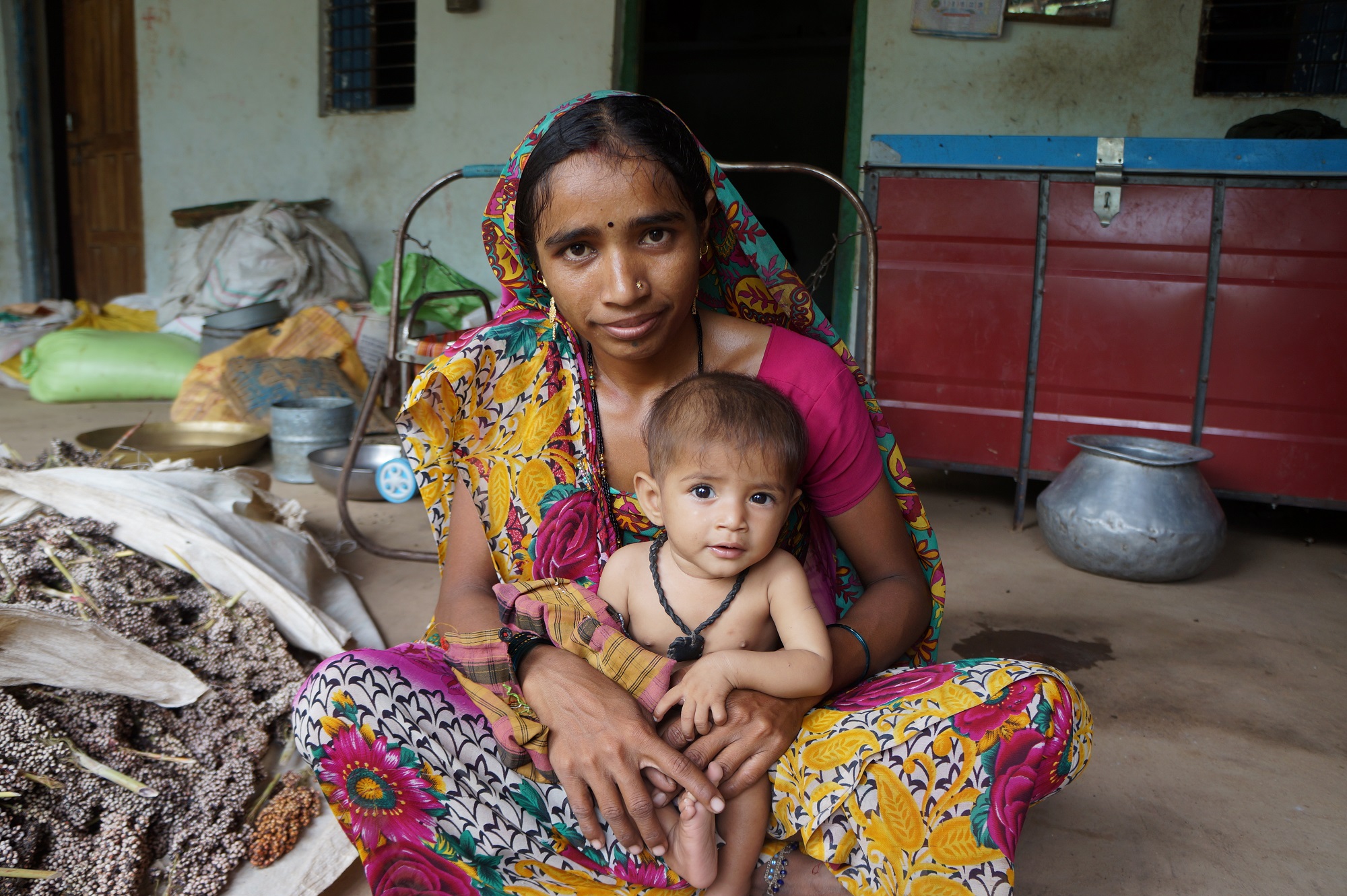 Durga is a 9-month-old girl from the village of Sajwani, which is situated in the Barwani block of Barwani district, Madhya Pradesh. The population of Sajwani is 3,880 (per the 2011 census). Most people living in the village are of the Sirvi or Meghwal castes and the Bhil or Bhilala tribes.

Real Medicine Foundation is committed to eradicating malnutrition within the communities of Barwani block. Our local workers, called CNEs (Community Nutrition Educators), regularly visit villages, following a community need-based monthly route. While traveling her route, each CNE meets with community members to discuss health, hygiene practices, and nutrition, as well as participating in community meetings to raise awareness of health issues in the village. She also meets with an Anganwadi worker at the Anganwadi center, and together they visit village families who have a malnourished child, screening the child using MUAC (mid-upper arm circumference) tape. With an illustrated IYCF (infant and young child feeding) flip book, CNEs also counsel the families about malnutrition, immunization, how to prepare nutritious foods, how to access services at Nutrition Rehabilitation Centers and the Anganwadi center, and more.

During her visit to the village of Sajwani on September 19, 2016, RMF CNE Salita Dawar met 9-month-old Durga and found that she was weak, with a MUAC measurement of 11.02 cm. This showed that Durga had severe acute malnutrition (SAM). When CNE Salita asked Durga’s family about her medical history, Durga’s mother explained:

I’m educated, but still I haven’t taken care of my child Durga. She was born in hospital and her weight was 2.5 kg at the time of birth, but she was not given exclusive breast fed at the birth time. An ANM suggested to me I started to feed her my milk. We lived in joint family and we need to obey the orders of elders in joint family. They not allowed us to feed complementary food to Durga after 6 months. They told if we feed after 6 months, Durga would be sick. They suggested start feeding after 9 months and we started feed her after 9 months. 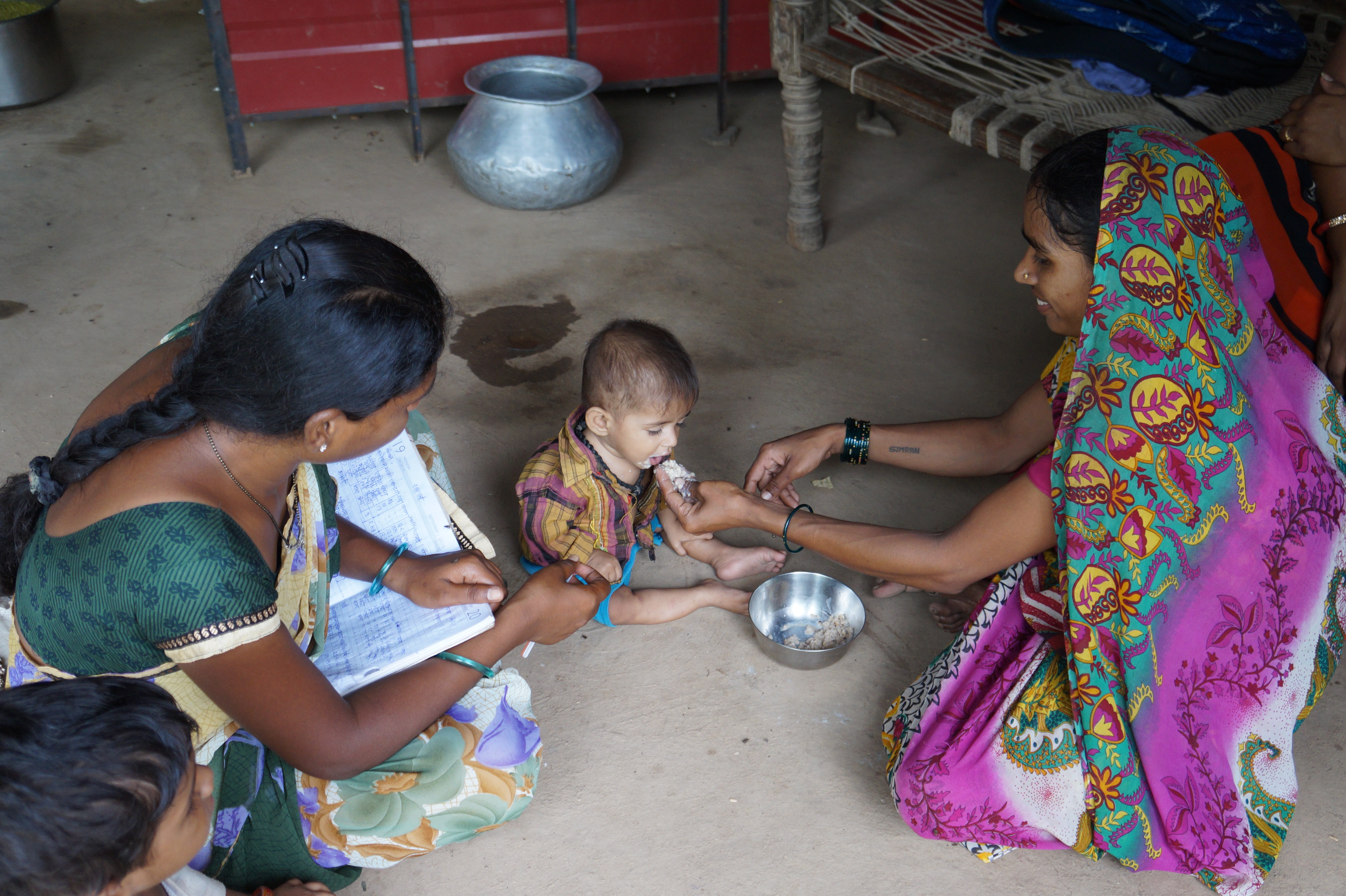 After hearing Durga’s background, CNE Salita understood the reasons why the young girl was suffering from Severe Acute Malnutrition (SAM). CNE Salita was then able to counsel Durga’s family about the causes, symptoms, and long-term effects of malnutrition, as well as the treatment of SAM. She recommended that Durga be taken to a Nutrition Rehabilitation Center, where she would be admitted for 15 to 21 days with her mother and receive a proper diet and treatment under the supervision of trained staff like doctors and feeding demonstrators. CNE Salita further explained that staff at the Nutrition Rehabilitation Center ensure timely follow-ups of a child’s health and feeding status, and if necessary, a doctor will refer the child to the hospital. Additionally, feeding demonstrators provide fresh food every 2 hours during the child’s stay; the child is fed 8 to 10 times a day. The Nutrition Rehabilitation Center even provides food for the mother and reimburses her Rs. 120 per day after four follow-up appointments have been completed for the child.

Despite CNE Salita’s detailed explanation, the family still refused to admit Durga to the Nutrition Rehabilitation Center. Thus, CNE Salita decided to treat Durga at home. She advised Durga’s mother to feed the child nutritious foods four times a day and be sure to wash her hands and use clean utensils while feeding Durga. CNE Salita further explained, “You can give her food and fruits in small pieces, pulse, rice, bread. You also feed her supplementary nutrition packets provided by Anganwadi center. The government is providing two packets in a week to SAM children.” After their discussion, CNE Salita asked the mother to bring food for Durga and showed her how to feed the young child. Now Durga started to eat. Salita asked Durga’s mother to follow her instructions to make her daughter healthier, and she agreed. 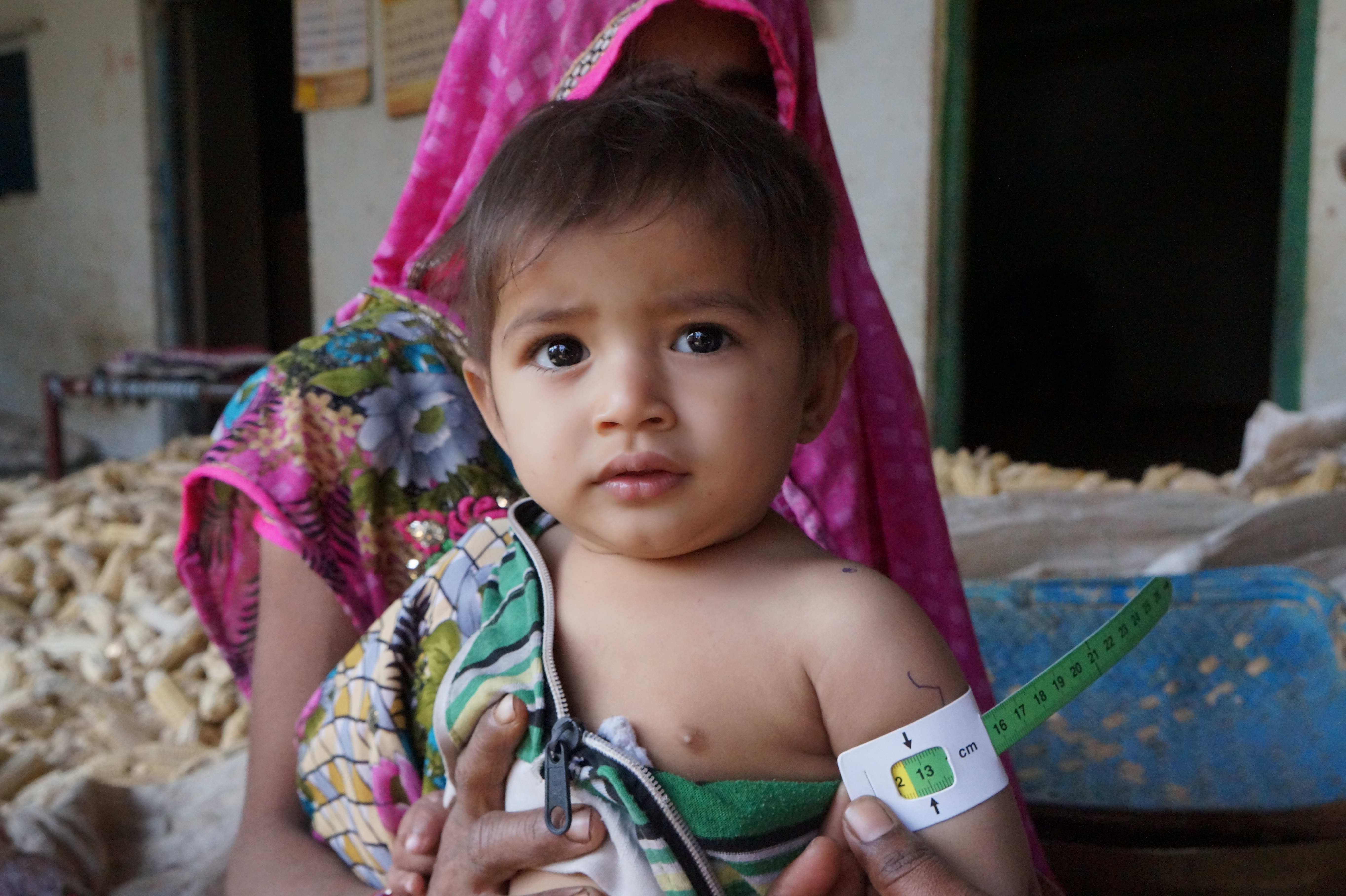 Salita continued her regular follow-ups with the family whenever she went to the village of Sajwani, and she counseled Durga’s mother about health, nutrition, and hygiene practices. On October 24, 2016, CNE Salita screened Durga again, and found that her MUAC had improved to 11.6 cm. Now Durga was in the category of MAM (moderate acute malnutrition); she had improved, but still had a long way to go. Salita continued her regular follow-ups and counseling of Durga’s mother, and the mother continued to follow Salita’s advice.

After three months of identification and regular follow-ups, Durga regained a normal weight and nutritional status. On December 23, 2016, her MUAC was at 13 cm. Durga’s mother thanked CNE Salita and asked to meet regularly with her when she visits the village of Sajwani. Now Durga is healthy, and she and her mother are happy.