In this article posted on Huffingtonpost.com, Amy Goodman, the renowned host of Democracy Now!, echos much of what we’ve heard from our staff on the ground, and points out that according to the Washington Post only 2% of the promised reconstruction aid has been delivered, and much of the U.S’s $1.15 Billion pledge is still stuck in Congress.  It is also pointed out that they could only find 6 of the 197 organizations that solicited money having publicly available reports detailing their activities.

We at RMF are proud, as always, to have detailed every penny spent on our initiatives and ensure it’s effectiveness.

Here’s the article below, and the link to the original:  (http://www.huffingtonpost.com/amy-goodman/haiti-six-months-after-th_b_645833.html)

PORT-AU-PRINCE, Haiti–July 12 marked the six-month anniversary of the devastating earthquake here in Haiti that killed as many as 300,000 people and left much of the country in ruins. Up to 1.8 million people are living in squalid tent cities, with inadequate sanitation, if any, no electricity and little security, or any respite from the intense heat and the worsening rains. Rape, hunger and despair are constant threats to the people stranded in the camps. Six months ago, the world seemed united with commitments to help Haiti recover. Now, half a year later, the rubble remains in place, and misery blankets the camps, layered with heat, drenched by rain.

After landing in Haiti, we traveled to one of the more than 1,350 refugee camps, Camp Corail. It is right near Titanyen, which was used as a dumping ground for bodies during the first coup against President Jean-Bertrand Aristide, and which, after the earthquake, was used for makeshift mass graves.

Corail is on a flat expanse of white gravel, with orderly rows of tents. During the day, the camp becomes searingly hot, with no trees for protection.

Corail resident Romain Arius told me: "In the situation we’re living here in the tents, we can’t continue like that anymore. We would ask them as soon as possible to give us the real houses that they said they were going to give us so that our situation could improve."

Soon after we left, we heard that a storm collapsed at least 94 tents and sent hundreds of residents fleeing to find shelter.

Haitians are angry, questioning where the billions of dollars donated in the immediate aftermath of the earthquake have gone. The Disaster Accountability Project found that of the 197 organizations that solicited money following the earthquake, only six had publicly available reports detailing their activities.

From the "international donor community," the wealthier nations, more than $9 billion was pledged, but to date, only Brazil, Norway and Australia have paid in full. Most of the U.S. pledge of $1.15 billion is now being held up in Congress.

Patrick Elie, a longtime Haitian democracy activist and Haiti’s former secretary of state for public security, spoke with me, about land ownership and the earthquake’s enormous toll:

"Land tenure in Haiti is in total chaos. This is also the result of the behavior of the Haitian elites over centuries. They appropriated land, especially after independence and the end of slavery, which would have been common property. And now, there is a lot of discussion about who owns what piece of land."

Elie said that in this time of emergency that gives the government the power of eminent domain, the key question is whose land will be seized — communal land that peasants have used for centuries, or the vast tracts of land owned by the elites. 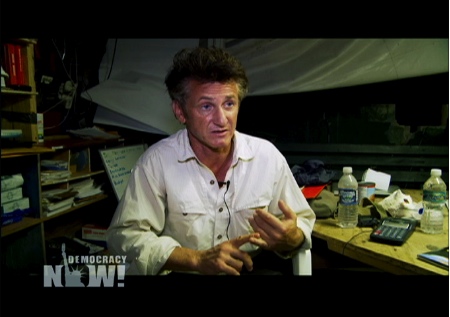 I also spoke with Sean Penn. The two-time Oscar-winning actor came to Haiti after the earthquake. Having just been through a medical crisis with his own teenage son, who underwent major surgery, he was horrified at the stories he was hearing about the amputations being performed in Haiti without anesthesia. Penn founded the J/P Haitian Relief Organization (jphro.org) and has been in Haiti for five of the past six months, managing a refugee camp at the Petionville Club golf course with 55,000 Haitians displaced by the earthquake. Sitting in a large tent, Penn was frustrated. Comparing the U.S. resources being spent in Afghanistan (which he called "a ludicrous exercise") with the U.S. spending in Haiti, he said,

"You have a war here, you’ve got a surge coming with storms, but no face to hate, no country to rail at, no natural resources, and the faces here are black."

Penn says J/P HRO will be in Haiti for the long haul: "We plan to adapt, to adjust. I think our next major new push for us will be rubble removal and working with partners to get people returned into neighborhoods and to again work with partners. Take camp management into community management and advocacy."

Patrick Elie advocates for popular Haitian leadership in the reconstruction: "We are a people who can fend for ourselves. We have a vision of where we want to go. So we do need friends, but we don’t need people to think for us, or to pity us."

According to the Washington Post, only 2 percent of promised reconstruction aid has been delivered. The hurricane season is upon Haiti, and millions there are counting on all of us making good on our pledges.

For all of Democracy Now!’s coverage of the Haiti earthquake’s six month anniversary, including an exclusive, hour-long interview with Sean Penn, visit http://www.democracynow.org/tags/haiti_earthquake

Amy Goodman is the host of "Democracy Now!", a daily international TV/radio news hour airing on more than 850 stations around the world. She is the author of "Breaking the Sound Barrier,"recently released in paperback and now a New York Times best-seller.