Voices from the field: We shall name her Anandini, Anandini is Joy! 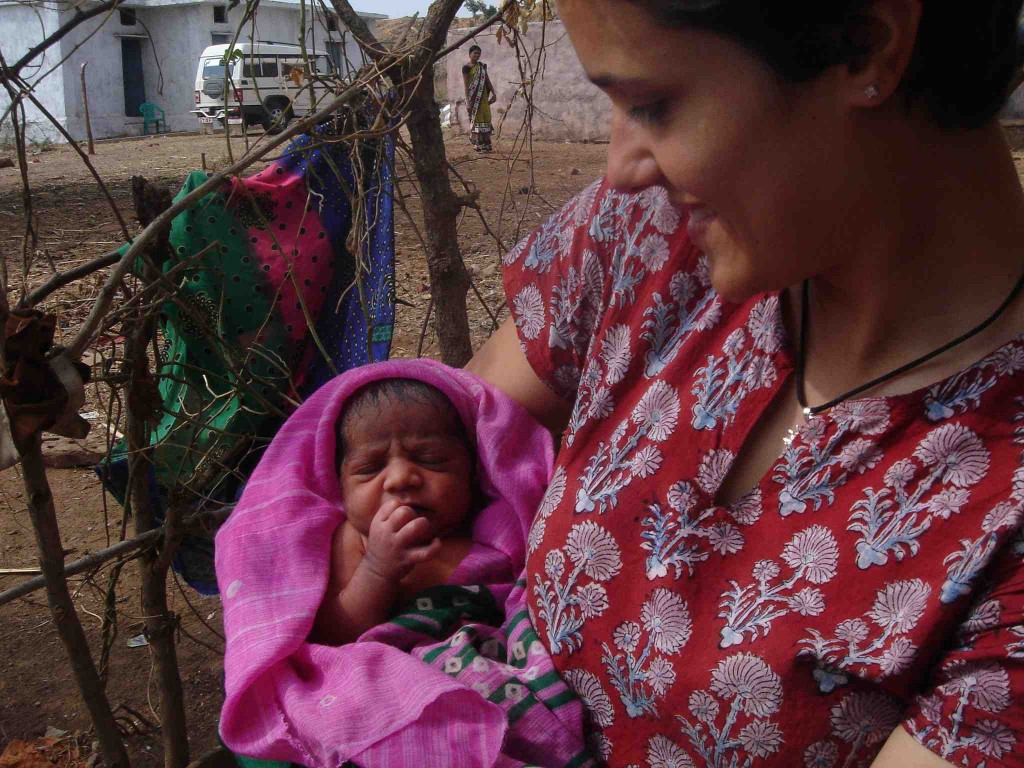 I still remember vividly those days, long ago in terms of time, but mentally like it was yesterday. After two days in shock, unable to sleep or eat after finding Gila (5 year old girl with tuberculosis meningitis and hydrocephalus) in her home on January 27th, I received a call from Caitlin informing me that the poor little girl had died despite all the efforts of the doctors in Ahmedabad. Honestly I must admit that I felt a slight relief, as I believe if she had survived her quality of life would not have been what a little girl who had gone through so many traumas so young deserved. The events around Gila’s death were reported in an earlier blog by Caitlin McQuilling.

It was obvious that someone in the family must have transmitted the deadly tuberculosis bacterium to Gila. So, after questioning and observing, it wasn’t difficult to identify the most critical patient in the family: the grandfather, the patriarch of the home, who had spent a long period bedridden, the last few days with fever and bleeding when spitting. My biggest fear was of the possible transmission of bacteria to the other 5 children in the home.

After two days immersed in the hospital we came to know that, while the grandfather clearly was suffering from tuberculosis, nearly all family members were anemic. With the help of our star native worker, Sumitra, I asked what their diet consisted of. It took me a few words to know that the conditions in which the family lived were deplorable: they had some land with dhal, a very typical lentil in India, had a few crops with peas and corn from which they made flour to cook roti, cakes of bread. They had nothing else. It was a great pleasure to provide the family food and other everyday items that they could not acquire. It was obvious that the family had spent all their savings in the treatment of Gila and was now ruined…

The second day, two hours after we dropped the family off at home, already very late at night, I got a call from Sumitra saying that Gila’s mother, who was in its final stages of pregnancy, had begun to feel the pains of childbirth. A new life was on the way! The next morning, impatient, I went to the hospital to see the new baby, when to my surprise, I learned that Dhana had not yet given birth. A nurse warned us that Dhana was very anemia Dhana and her life was in danger. I could not believe it! I thought again and again how unfair life was being with this family. Of course this hospital had no blood bank. Suddenly, a lot of ideas my mind was: what was the blood group of Dhana? Could I donate my blood? I begged the staff to analyze my blood type and they told me that it was not possible at the hospital. We had no choice but to go for help to a private hospital run by Catholics located in the same town, the same hospital that just 2 weeks before had stolen Gila’s life by not providing her the necessary drugs because of the family’s inability to pay. Maybe we could beg this hospital in this case to save the life of her mother and her brother/sister. We asked the midwife permission to take her to the other hospital, where we thought everything would be better under their supervision, but the midwife and the nurses told us that the baby would be born in the vehicle if we did. There was no time for anything, only wait.

Suddenly, from the hubbub of the hospital, we heard the cry of a newborn baby. It couldn’t be anyone else other than Gila’s new sibling. Taking advantage of a nurse on her way out of the delivery room, I rushed over to ask if the one crying was the one we were expecting. She nodded and let us know that everything had gone well, both the mother and daughter were fine, and there was no need for a blood transfusion to the mother. It was a girl! I could not contain my tears of joy. It was inevitable to think about reincarnation, so present in the lives of these people. Is that what you call it? 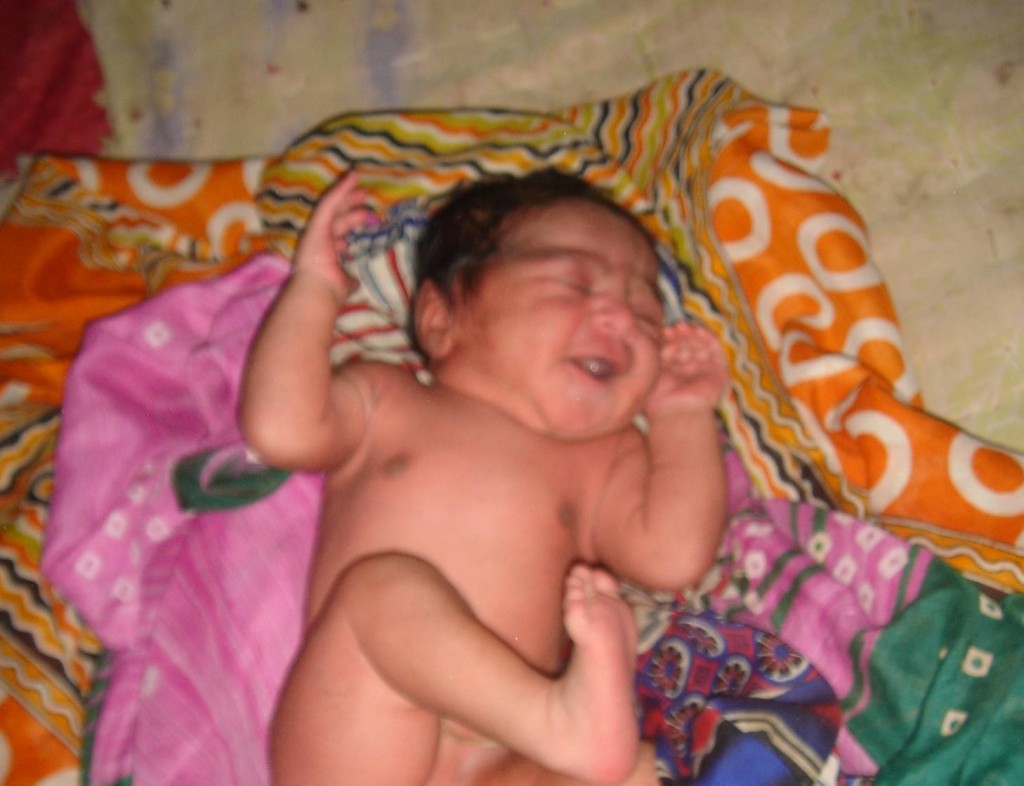 To my surprise and joy, the next day, I learned that the Gila’s parents had asked us, the Real Medicine Foundation staff, to choose a name for the girl. What an honor! Thus, we chose the name Anandini for her, which means "joyful." Anandini never cries. It was without a doubt, the best gift I received in India.

About a week after the birth, Caitlin, Jaimie and I went to the home for a visit. The family welcomed us with open arms. Concerned about their economic condition and their future, we asked how much their debt from Gila’s treatment totaled. They reported that to treat Gila they had borrowed € 1,000 to be returned with a 25% interest from a local lender, an insignificant amount in Western society, but which converts a family like this into a debtor for many years, perhaps also to the next generation.

I received a lot of money after writing a personal email the night Gila died to all my family and friends: It was an email asking them, each within their desires and possibilities, to donate money to use with the various groups I work with in India. Therefore, I immediately thought that I would love to help this family to get rid of this horrible debt. Thanks to the generosity of Jaimie, who was also present, and because she has raised a lot of money of her own we decided that we would pay equally between the two of us. A few days later we returned to the home with the money, allowing the family to be free of at least of this burden. We did this knowing that this was something outside of our organization, because the organization focuses on providing medical resources but not providing cash. We saw the first smile yet on Dhana’s face. Many thanks to everyone who made this possible! 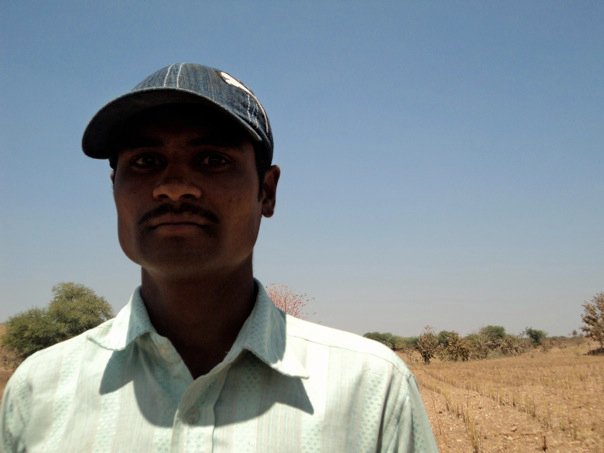 We could not resist asking Anandini’s parents what work they would do from now on. Their response was unanimous: when she was a few weeks older the family would migrate along with other farmers having to abandon their homes, greatly increasing risk of several diseases in appalling conditions to which they have to submit, and leaving the older children in the care of grandparents. This response left us all broken hearted. Already familiar with the good work and infinite human quality of this family, Caitlin and Jaimie did not hesitate to offer a job to Anandini’s father, Chhatra, as a Community Nutrition Educator (CNE) with our organization. Chhatra, now works joyfully in his own village and neighboring ones, going from house to house, making sure that other children do not become victims of malnutrition and other medical conditions that are so easily preventable but that steal the lives of many in these villages.