Voices from the Field: An Angel, from Justdial.com

I’m often asked what keeps me going in the face of the hardships and emotionally taxing situations we face working on issues such as childhood malnutrition and HIV/AIDS day in and day out.  My answer is simple: it’s all about finding inspiration in the most unexpected of places and circumstances. 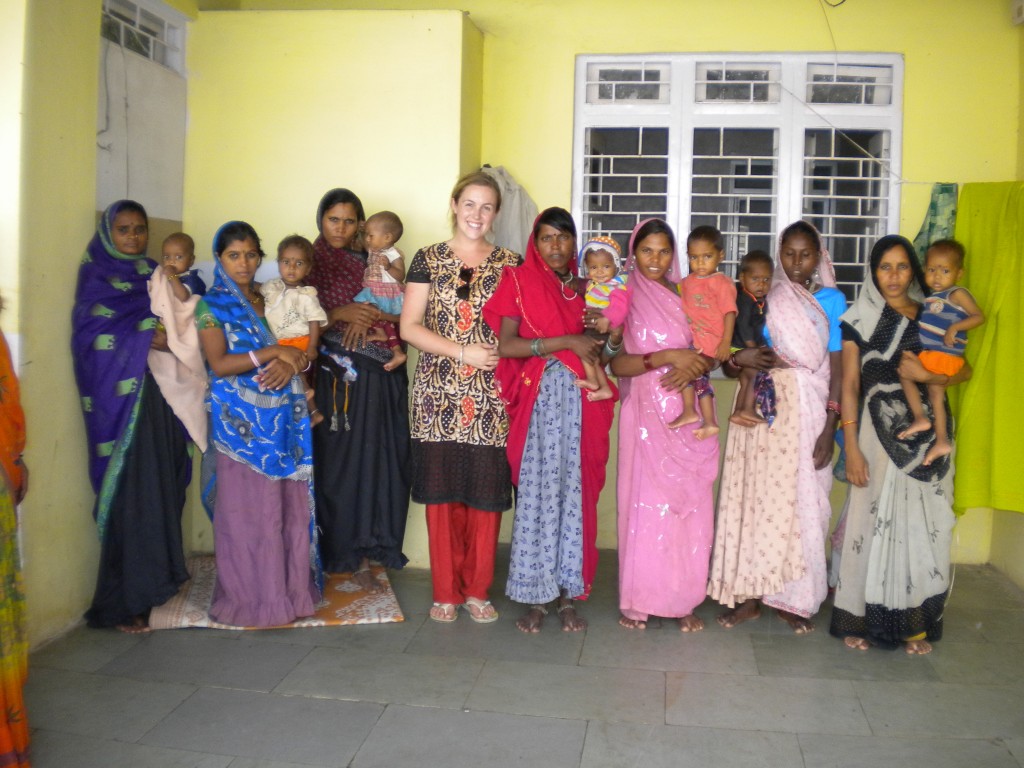 photo: Caitlin, and the mothers and children at the Malnutrition clinic

On Tuesday while out on a village visit we came across a little girl, Gila, who was extremely sick and dangerously malnourished.  She and her family had just returned from a month long stay at a private hospital in Dahod, Gujarat where Gila was properly diagnosed with tubercular meningitis, but unfortunately was not given the proper treatment.  Over the month she was there the family spent their entire savings and then some only to see Gila rapidly deteriorating.  After a month when the family could no longer afford “treatment” they were sent home.  This is when we found the family in the village, desperate for us to help in any way we could.  As soon as I saw Gila I knew she needed expert medical care not available in the state of MP.  We told the family that we would have to bring the little girl to the hospital immediately and they eagerly agreed without a second thought.

Along with Gila’s father, Suroj, we consulted a doctor in Jhabua to get his opinion on whether or not the girl could travel.  With the doctor’s immediate advice to go straight to Ahmedabad Civil Hospital and BJ Medical College,  I set out along with Sumitra, our CNE who first met the family, our wonderful and uncomplaining driver Mesul, and the little girl’s father and cousin on the 8 hour car ride.

As soon as we reached BJ Medical College, one of the best government health facilities in the country, we were rushed straight to the pediatric ICU.  The wonderful team of doctors there immediately put the little girl on oxygen and started treatment immediately.  They told us that the little girl’s condition was extremely serious and her chances of survival weren’t good, but promised to do everything they could to save her.  I spent the day in the hospital with the family on Wednesday, understanding the next steps with the doctors, getting all the lab tests they needed expedited, and making sure that they were comfortable.   We set the family up with a network of kind local volunteers who promised to look after the family on a daily basis since RMF couldn’t station one of our team members at the hospital for the 3-4 weeks the family would need to be there.

At 5am on Thursday while I was rushing to get my things together for the airport, I got a phone call from Suroj.  Between sobs, Gila’s father told me that she had passed away a half hour before and he didn’t know what to do.  He wanted to go home as soon as possible to cremate Gila, but didn’t know how he would get her body the 10 hours home.  He begged me to help the family find a way home as soon as possible.  When I got into the taxi a few minutes later I knew my options were severely limited.  I had to be on a flight in an hour to go to an important meeting in Bhopal, but I also couldn’t leave this family stranded.  I’m not very familiar with Ahmedabad, especially to find an emergency hearse at 5am capable of making an 8 hour trip across state boundaries.  But as I greeted the taxi driver, that my friend found from JustDial.com, I immediately had a good feeling about him.  I had 20 minutes to convince Nitin, the driver, to drive 10 hours with a sobbing father and a dead body.

I laid it on thick.  In my remedial Hindi I told him about the work RMF does in Jhabua, about the malnourished kids, about this caring family who tried to do everything for their daughter but who were failed by the medical system.  I wasn’t ashamed to beg this man to do us this favor.  By the end of the taxi ride this driver had no choice but to agree to my outrageous request to go directly from the airport to the district hospital to find a family who didn’t speak his language (Bhili v. Gujarati) and to take them and child’s body 8 hours to a tribal area which many individuals in Ahmedabad have prejudice about.   The driver was hesitant to take on this responsibility but conceded to take the family as far as Jhabua (not their village) as long as there was a death certificate.  While the taxi driver seemed honest, I could only wish for the best as I handed him money and ran into the airport to catch my flight.

While going through airport security I arrange an expedited death certificate from the hospital and connected Nitin with Suroj and Suminta.  As I boarded the flight Nitin was lost on the hospital campus.  On my layover in Indore I confirmed that Nitin had in fact picked up the family and that they were safely on the way to Jhabua.  Phew.  Job done.  I could now concentrate on PowerPoints and process indicators.

Thursday evening I got a call from Sumitra, our CNE who met the family in Jhabua when they arrived.  After she filled me in on how the family was doing, how the cremation went, and so on, she also had a message for me.

Not only had Nitin driven the family the 10 hours to Jhabua as agreed, he also insisted on driving them all the way to their remote village himself.  Not only did he go out of his way to drive them to the village, he attended Gila’s cremation as a member of the family.  The next morning he called Sumitra, not to complain, as many people would, but to thank her.  He told Sumitra that he was grateful that RMF asked him to do this.  He said it made him feel so good that he was able to be there for this wonderful family during their time of need and was just happy to be part of all of this.

Thank you Nitin.  Its individuals like you who keep us going and remind us that even in the most terrible of circumstances, humanity can be found from the most unexpected places.

For more information about RMF’s Malnutrition Eradication Program in India, click here and for more on our HIV/AIDS click here.

To contribute to this initiative, please visit our website at  realmedicinefoundation.org.