URGENT PRIORITIES for Haiti Relief efforts as of February 17, 2010 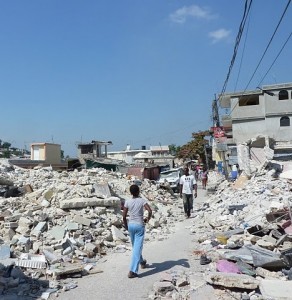 URGENT PRIORITIES for Haiti Relief efforts as of February 17, 2010

Just over a month after the earthquake, and with the arrival of the rainy season just a few weeks away, the challenges for the international aid efforts in Haiti are still monumental.

As of February 15th, the national civil protection agency in Haiti estimates that approximately 217,366 people died from the 12 January earthquake, and other sources estimating that number to surpass 250,000.  Current estimates are that 97,294 houses were destroyed and 188,383 were damaged across all areas of Haiti.

According the United Nations Office for the Coordination of Humanitarian Affairs (OCHA), the arm of the UN responsible for coordinating the many humanitarian organizations at work in Haiti, there are approximately 1,100,000 Haitians in need of shelter.   As of it’s February 16th published report, the OCHA’s top priority needs for humanitarian assistance in Haiti include:  the provision of shelter material and site management, sanitation and hygiene, food security, cash-for-work programs to support livelihoods, and the protection of vulnerable groups.

The United Nations World Food Program and many other partners have so far been able to reach over 3.4 million people with food assistance since the start of the response; and 850,000 people are receiving 5 liters of water per day.   As of the 15th of February, 2,437,566 individuals had received a two-week ration of rice with a total of 10,000 metric tons of rice distributed.

The Ministry of Public Health has confirmed that medicines and medical products will be provided free of charge to all public health facilities until the 12 of April.   The Ministry is also completing a National Plan for Disability by March 1st, including topics such as rehabilitation centers, prosthetics, orthotics, and accessible structures.
Rainy Season approaching
With the rainy/hurricane season rapidly approaching, the concern around sanitation, hygiene and appropriate shelter is rapidly becoming the most urgent issue.  Overcrowded temporary encampments, serious sanitation/hygiene issues, and the predicted rainy season spike in Malaria and Dengue fever cases are presenting a significant challenge to relief efforts.
According to a recent BBC news article: “As many as 700,000 people are living out in the open, in makeshift shelters. The luckier have found old and rusty corrugated iron roofs. Others huddle under bed-sheets strung between wooden poles. Shelter is, according to aid agencies, a monumental challenge.”
Complicating the challenge of building or creating any kind of permanent structures are the difficulty in finding large enough open spaces because of the immense amount of rubble created from destroyed buildings.
A plan is currently in place to attempt to combat the hygiene issues through the OCHA to provide an initial 12,950 emergency latrines in April to the displacement camps, and a second wave of 21,000 within 6 months.
“Most destructive natural disaster in modern times”
From an economic perspective, an article on NPR’s Planet Money website,  writes that “the cost of rebuilding Haiti is expected to be at least $8.1 billion, according to a recent report by economists at the Inter-American Development Bank, that’s nearly one billion more than the amount of goods and services the country produced in 2008.”
“The economists that compiled this report are saying that it’s likely that the Haitian earthquake will be the "most destructive natural disaster in modern times, when viewed in relation to the size of the Haiti’s population and its economy." The damages are estimated to be between 104% and 117 % of the country’s GDP, compared to the 2004 tsunami which caused damages equal to 7 % of Sri Lanka’s GDP.”
No, you didn’t misread that, the study estimated that the earthquake damage is equal to an entire year’s worth of Haiti’s GDP plus 4…or 104.
The initial few weeks of international relief efforts have made a significant positive impact on the people of Haiti and are worth noting; but the challenges in the coming weeks, months and years are daunting, and will take the continued focus and generosity of the international community to have any hope of rebuilding this shattered country.