UN Appeals for Funding to Fight Cholera in Haiti 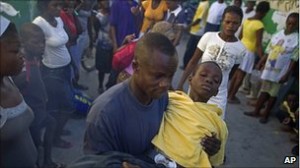 As we continue to follow the Cholera outbreak in Haiti:

UN spokeswoman Elisabeth Byrs said that unless funds were provided, "all our efforts can be outrun by the epidemic". (BBCNews)

BBC news reporting that while Haiti missed the brunt of the Hurricane Tomas storm, the flooding that followed the heavy rains has greatly increased the risk of a large cholera outbreak in the capital, with more than 70 cases reported in Port-au-Prince, and more than 540 people killed in the areas outside of the capital that were first affected.

To contribute to our Haiti Earthquake Relief Efforts, please visit our website at realmedicinefoundation.org.

Categories: Disaster Relief Haiti In the news or View All
Return to Top