by Caitlin McQuilling and Sahil Sondhi 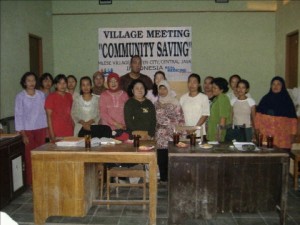 Now four years into RMF’s partnership with KOMPIP, RMF is taking a step back to reflect on the successes of our joint Neighborhood Endowment Fund Program thus far.

This community-owned revolving fund initiative provides its members with access to small loans for micro-enterprise purposes. Each neighborhood has its own fund and democratically elects three to four people to administer the fund voluntarily, acting in the capacities of leader, treasurer and secretary. The neighborhood structure that is already in existence is the pillar of the program. In Indonesia this structure is known as the “RT-RW” system of socio-geographic organization.

Each defined geographic area is divided up into neighborhoods that are identifiable by this RT-RW marker and these cohesive neighborhood groups are instilled with a communal sense of ownership and responsibility of their NEF. The amount received by each neighborhood is generally sufficient for two simultaneous borrowers of up to US$100 each and at a monthly interest rate of 1% to 1.5%. In addition to designing and field testing this system, KOMPIP and RMF have provided basic microcredit bookkeeping training, micro business management training, micro business marketing training and solidarity building to the neighborhoods receiving these funds so that communities can maximize their own results.

Out of 198 original neighborhoods in Yogyajakarta and Klaten, Central Java, 193 neighborhoods (with a membership of 7,000 people) successfully became self-sustainable. Loan repayment rates have been close to 100% and NEF communities have responded well to KOMPIP and RMF’s hands-on approach at facilitating these loans. Additionally, in all 193 neighborhoods the revolving funds have grown substantially larger, allowing for increased access and larger loans.

Through field visits to a selection of these neighborhood communities, KOMPIP has documented substantial changes in the standards of living of NEF communities. Borrowers have improved their neighborhood communities’ access to healthcare and education and have increased their incomes, quality of housing, and levels of empowerment. RMF and KOMPIP have successfully created livelihoods for thousands of people and have initiated a “multiplier” effect in that the revolving funds in at least 193 neighborhood communities continue to rotate from borrower to borrower, creating microenterprises and employment

One significant advantage of community-owned microfinance units such as KOMPIP-RMF’s NEF is the solid financial performance that is observed. This is attributable to the communal sense of ownership of respective neighborhood-level funds as well as the peer pressure that results from such a collectivist system in which neighborhood members are mutually dependent upon each other. Additionally, overhead costs continue to be low and the cohesive and communal nature of the neighborhood groups greatly reduces risk since prospective borrowers are screened by those that know their strengths and weaknesses best.

Due to the extraordinary success achieved, measured by increasing incomes and standards of living, KOMPIP, RMF and the local government of Solo entered into a partnership to replicate the NEF model to the entire Surakarta area, encompassing 2668 neighborhoods and 100,000 people. RMF and KOMPIP were able to put in modest organizational funds in order to leverage a $250,000 pledge by the local government of Surakarta.

RMF and KOMPIP used their resources to monitor the distribution of this government grant and to introduce the NEF concept to the larger Surakarta area. RMF and KOMPIP held socialization events and workshops at the city level and at the district level and aided with the distribution of seed grants to neighborhood communities. These activities were extremely well received by the community, with approximately 3000 people attending the first NEF socialization

Since the increased NEF funds were only released months ago, it is difficult to measure the qualitative impact of this seed money on local communities. RMF and KOMPIP will offer the Mayor’s Office any help we can to assess the impact of this grant and to move the program forwards. The local government of Surakarta continues to offer support for the NEF initiative and may be able to help revive these newest NEF members in the next fiscal year.

The relationship and trust built with the government of Surakarta will be invaluable – RMF and/or KOMPIP will be able to make use of this relationship in future endeavors. Moving forwards RMF will continue with these relationships and will build upon the successes of the NEF’s with a focus on livelihood support and innovation for those taking NEF loans and also on quality of NEF services.