The Highs and Lows of One Child at a Time

One of RMF’s guiding principles is that we approach our work “one child at a time”, focusing on individuals, real impacts and tangible results even as we implement large-scale, projects affecting millions of people. This approach, while effective, is never easy. We get attached. This past month, I’ve been reminded of how rewarding one child at a time can be and also of how painful.

I met Abishek, aged 7, one night last December at Real Medicine’s office in Jhabua. I was cranky for spending a late-night in the office sorting through expenses when Jimmy, our project coordinator, brought in a boy and his father who had heard about RMF and wanted to see if we could help them. Even in the dim light I could tell that Abishek was not well. His bony hand clung around his father’s neck as his father told me about Abishek’s battle with cancer and hospitals and the family’s battle with debt and mistreatment. Abishek had been diagnosed with a Wilms tumor, a form of cancer not necessarily fatal in the West, if caught early, but which was already in the late stages because of the poor rural medical system in Jhabua. As Abishek started to get really sick and his stomach began to swell drastically, he and his family were bounced around from hospital to hospital, his treatment being ever referred, deferred, by doctors unable to tell the seriousness of his condition. He finally ended up at a private hospital in Indore where the hospital charged his family obscene amounts of money (which they had to borrow from money lenders to cover) and performed a surgery that another later doctor told me was a butcher’s job. It is suspected, and highly probably given this hospital’s reputation, that the surgeon purposely did not remove the entire tumor so that there would be more to remove later, for another surgery fee. Further, we learned that Abishek was only beingadministered 3 of the 5 recommended chemotherapy agents he required. He went through all of the side-effects of chemo, but with little benefit. Sounds unimaginable, but sometimes medicine as a business overrides the Hippocratic Oath.

Things were not looking good for Abishek when we met him, but every child deserves a chance. I called on a friend whose father is the chief of surgery at the best pediatric hospital in Ahmadabad, 10 hours away and he immediately agreed to see Abishek, free of cost. The doctors, while warning us of the worst, said Abishek had a small chance of surviving and started him right away on the correct chemo. We took Abishek and his family back and forth to the hospital in Ahmadabad, pestering doctors for quicker results, bothering nurses for extra blankets, and even donating blood to Abishek.
While most of the Abishek’s doctors, neighbors, and family members had given up hope of his survival, we stubbornly, continued to consult with experts, continued to look for better chemotherapy agents, and showered Abishek with his favorite chocolates and juice boxes. Ever y visit to Abishek’s house was heartbreaking as we watched Abishek waste away, cancer ravaging his body, and imagining that this all could have been avoided if Abishek’s cancer was detected earlier and if this criminal hospital in Indore hadn’t put greed over medicine.

While going through the heartbreaking journey with Abishek, my spirits and hopes were also lifted by another one of our special cases, Sachini, in Sri Lanka.

Martina met Sachini two years ago and diagnosed her with Turner’s syndrome, a growth hormone imbalance. RMF has supported her treatment ever since, with Sachini’s condition improving drastically, even allowing her to start attending school again, until I saw her in Sri Lanka in November. Sachini had started getting severe headaches, and since she was under RMF’s care, she was quickly referred from the clinic near her town, to a government hospital in Colombo where she was seen by experts. Sachini was diagnosed with a tumor on her pituitary gland, requiring urgent surgery. This is where her family ran into problems. There is only one doctor capable of performing the surgery Sachini needed, but dismissed as a villager from a far-off town, Sachini was placed at #184 on the government waitlist. At the rate surgeries were being performed, Sachini wouldn’t have made it until her number was called.

This is where RMF called in our network. We made dozens of phone calls around the world, reaching out to everyone from a former US Ambassador to Sri Lanka to cricket players to businessmen to Sri Lankan politicians. Suddenly this family from Sri Lanka’s interior was being paid attention to. Sachini’s surgery was scheduled in rapid time and now, post-surgery, Sachini is making a full recovery. She has her vision back, no more headaches, and is looking forward to getting back to her passion, dancing the Tango.

Yesterday, Abishek passed away. With the confidence that’s he’s in a better place, we can only think about how, in his honor, we can help the next child. Hopefully next time we’ll find the child at an earlier stage, we’ll stop this hospital from harming more families; we’ll have a success story.

“One child at a time” in practice isn’t always the feel good motto placed in slogans and in PSAs. It involves sleepless nights, passing out after giving blood, fighting with doctors, politicians, and money lenders, and finding extra hours in the day. But when a tragedy like Abishek’s begins to erode hope, a triumph like Sachini’s gives light. We’ll battle on, fighting for one child at a time, inspired by those we’ve helped and in honor of those we couldn’t. 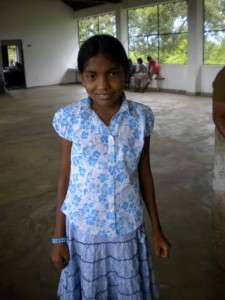