Malnutrition eradication approaches in India over the past 30 years have focused on food security, trying to ensure that families across the country have access to staple foods. This has resulted in a well developed food distribution system, even in emergency circumstances, but has not achieved reduction in malnutrition – there actually have been increases in some areas. 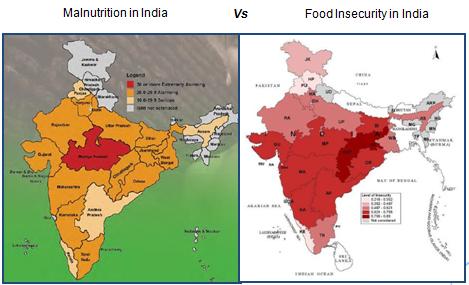 The causes for malnutrition are extremely complicated in India and vary district by district. Diseases such as tuberculosis and HIV are drivers of malnutrition for many children, and seasonal diseases such as diarrhea and pneumonia exacerbate malnutrition in other children. Issues of sanitation, hygiene and access to clean water are closely tied to malnutrition.

The majority of children and pregnant women in MP, 70%, are anemic. Protein deficiencies are rampant. Most children do not have access to vitamin A or basic vaccinations. Fruits, vegetables, and proteins rarely compliment meals of rice and pulses.

And there are other, more complicated factors at play. I met one family a few weeks ago whose three children were malnourished, the baby severely malnourished. Our village nurse tried to convince them to take the child to the Nutrition Rehabilitation Centre, but they refused to go until a wedding in the village was over. Tribal weddings in MP last for days and nights. They are high energy and intense. I attended the last day of the wedding, which consisted of the entire village of about 200 people singing, dancing, and waiting in the sweltering sun from 10am to 6pm. Many of the families carried snacks with them to get them through the day until dinner was served. This family didn’t. I kept an eye on them all day, watching the baby lull around in lethargy, without being breastfed. He didn’t cry, or laugh, once. The older girls were weak and didn’t play with the other children. Finally dinner – fresh goat, rice, and dal – was served by the groom’s family. I was looking forward to seeing the family eat. As I stealthily observed from across the crowd, the family had a bite or two of the food and then packed the food neatly away in a plastic bag along with empty bottles they had collected during the day. It was heart breaking, perplexing, and probably unjustly on my part, angering. The baby perked up and started to giggle even after receiving just a few bits of rice. The family was starving in the presence of abundant nutrition. They could have easily gotten seconds just as many of the other families did. 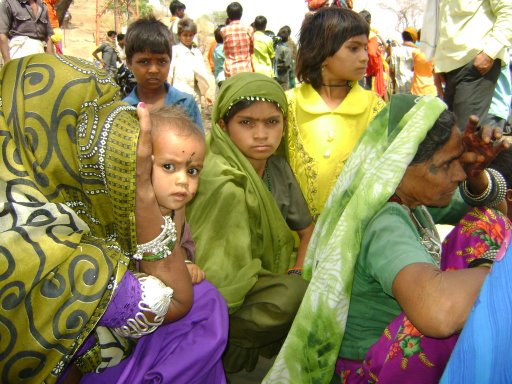 I asked my local colleagues right away for an explanation of what I saw and an intervention. They pointed out to me that the husband was not present at the gathering and that often amongst people in this particular tribe women will not eat before their husbands. They would follow up with the husband later, but couldn’t do anything then.

The situation became even more baffling, when my colleague who knows the family told me that the husband and father is a chef at the local school. Clearly he has sufficient access to enough nutrition to bring home to his family.

This colleague spoke to the father later that night and convinced the father to bring the child to the nutrition rehabilitation center the next day. The baby will get treatment and gain enough weight to be back on a normal growth pattern – but what then? How can we guarantee that the baby will not just fall back into malnutrition?

The only thing we can do now is to stay close to the family, visit often and counsel both the mother and father (who seems to be the one making decisions about food in the household) about proper nutrition. While we spend time with them, we’ll also try to understand the root causes of malnutrition in the family. This is not going to be easy or immediate. Our local health workers need to gain the trust of this family in order to understand the problem and solve malnutrition at its core.

And this is what RMF and our partners in the field will have to do in every case to identify, treat, and prevent malnutrition. We will work with groups who are on the ground and who know the local populations the best. We realize that to cure malnutrition in India, food isn’t the only answer. We can pour all the money in the world into the problem and that won’t break the cycle. Sensitive, micro approaches are needed to ensure that our program is effective, efficient and will create long-term change.

Categories: India Malnutrition Eradication or View All
Return to Top