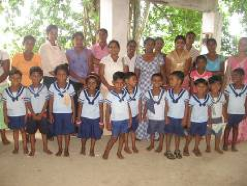 Tangalle Children’s Relay’s accomplishments throughout the course of 2009 reflect our commitment to providing the best possible education for the children in our care. Our programs focus on:

•    Encouraging parental involvement in their children’s education
•    Ensuring the health and well-being of the children
•    Providing meals to children of very poor families
•    Modeling human values, reflecting kindness to others, sharing, and religious and ethnic tolerance
•    Inviting interaction with other students to help develop social and interpersonal skills
•    Developing the children’s respect and appreciation for learning and for nature
•    Alerting the children to the impact of natural disasters and environmental pollution
•    Introducing the children to modern communication technology and its benefits
•    Teaching Basic English

Activities at Tangalle Children’s Relay benefited 24 families and their children.  In addition to the teachers, some of the parents helped to prepare morning meals for the children and received a small stipend for their help.  Some of the families even provided grains and local food items to be served for breakfast to the children.

This year, we are proud to announce that 15 TCR children have advanced successfully to the public school system. The feedback from their new teachers was very positive and they were impressed with how skilled the children were in a variety of activities. The children’s parents also commented on how well rounded they were.  Socially, the children found it easy to be in the new environment with different children and could often be seen in front of the lines at the new school, enthusiastic to learn more.

In addition to providing support for our instructors, RMF sponsored a number of activities that provided the foundation for the children to develop their social and interpersonal skills. These included:

RMF Advisory Board member Mrs. Mali Munaweera visited Sri Lanka in July.  Originally from Sri Lanka and now living in Los Angeles, she returned to investigate how to support schools in her home country.  Tangalle Children’s Relay was one of her first stops. The children welcomed her with warmly by offering flowers.

The Special Tour Day for the children was filled with a visit to the park, the sea and Tangalle’s main fishing village.  Many of the children’s fathers are fishermen, however most of the children have never seen a boat.

To help the children learn more about the traditional market activities, they have their own market day each month.  They learn to handle money and describe the locally grown produce.

Celebrating the children’s creativity is central to reinforcing their individuality and makes for a happy day for all.

As our chief invitee, Ms. Minerva Fernando, Real Medicine Foundation’s Coordinator,  lights the oil lamp followed by the other guests. The kids started clapping to show their gratitude.

The educational department head for the preschool first examined the artwork and asked several questions.  Our kids took the lead and guided the guests and explained their artwork to them.

22 children from Sucharitha Preschool were also invited to attend so the children could make new friends. Even our old students, Thiruni, Kaweesha, Naweena, and Dimuthu came back to TCR to join in the event. They seem to be doing very well in school.

The children visited Yala National Park and historic Hindu and Buddhist temples in the Kataragama area.

This Kataragama Hindu temple is a sacred place for Hindus but it also shows ancient Buddhist influence.  Kumali, one of our kids has lots of white lotus flowers to offer to Buddha.  All the children have flowers ready to pay homage to Buddha.

“Ms. Cait”, also from USA, is Real Medicine Foundation’s Program Director India.  She made her first ever visit to Sri Lanka in November and visited us on the 19th. She was very fond of our kids and the preschool project. To see the smiles and hospitality offered here by the local community was heartwarming.

Caitlin receives flowers from the children

The Minhath Preschool kids presented their activities and dance performances to make the occasion colorful.

Children from TCR and Minhath Montessori Preschools make the show a success.

Categories: Sri Lanka or View All
Return to Top