Help us give more women and children the chance to realize their potential this holiday season by making a donation to our Giving Tuesday campaign. Every dollar will go directly to the field and give women like Deborah Mathew a chance at a better life. 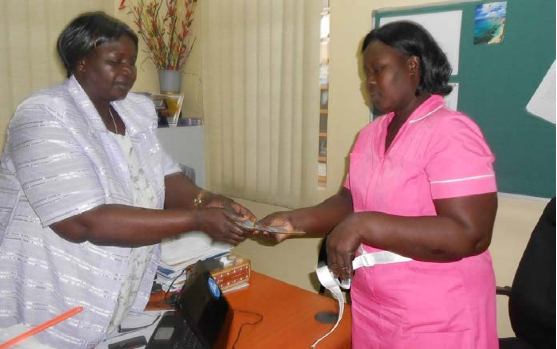 During the fighting between government and oppositional forces for control of Malakal town in South Sudan in December 2013 Deborah Mathew, a 25 year old South Sudanese national and midwifery student at JCONAM, witnessed the murder of her uncle, his wife and their three children. Deborah was orphaned as a small child and lived happily with her uncle and his children until the fighting erupted across the country.

Four more of her relatives were burned alive inside their houses, while others drowned in a ferry accident on the Nile River which killed 200 people.

Deborah managed to survive for three days without food or water by hiding in an abandoned, dilapidated pit latrine. On the fourth day she heard women’s voices passing by and she screamed for help. Luckily they heard her cries and Deborah was rescued. One of the women, Nakensia (a Dinka woman), escorted Deborah to UNMISS camp where she reconnected with the principal of JCONAM, Petronella, by phone.

“Now I have lost everything,” she said, tears rolling down her cheeks, “my parents, uncle and family, my relatives; I am left alone in this world, God why me? My intention was to study and go back and help my community, now where do I go?”

RMF South Sudan, after hearing Deborah’s story, provided emotional and social support to enable her to continue her studies and achieve her dream. She was also given 1,000SSP ($175) to purchase basic necessities. With this support Deborah has managed to emerge from tragedy, promising to work hard in school and conduct herself professionally, with dignity and respect regardless of ethnicity because “we are all South Sudanese.”

This is just a one of the stories we have helped co-create; lived by the newly empowered people we have been able to help. Make a donation and pledge to share our vision. Happy holidays!