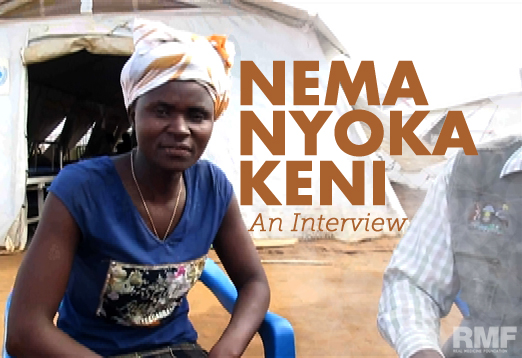 There is no easy way to put it. Since July 2016 when fighting once again broke out in Juba, the people of South Sudan have been starved to death and murdered outright. Gun fire, throats slit, locked in their homes and burned alive. There are now 290,000 people at risk of dying from malnutrition due to the destruction of farms and the blocking of aid. Many go to aid tents, just to be gunned down.

“…when fighting started in South Sudan, life became very bad. You find you lost your parents, that is the first thing. You lost the children, you even lost the relative. There is loss of education; there is nowhere you can go and get education, even getting medicine is problem; you cannot get any facility that is operating. Everything became hard. You are killed if you are in the way, or even they go and pick you from your house, you are killed. That’s when life changed totally to be bad. When the war broke.” – Nema Nyoka Keni (age 19)

With no food, inflation at over 660%, and the war raging, there was no choice for Nema Nyoka Keni but to flee to safety.

In July 2016, Bidibidi was a quiet expanse of dirt and bush with little infrastructure, no roads, and few people. The air was pure and sweet, the horizon clear. Within a month’s time, the fields would fill with tents, supplies, health care facilities, and worn bodies, broken from travel and the traumas of war.

After her parents were killed, with only a five-liter Jerrycan full of water, some biscuits, and a few belongings, Nema Kyoka Keni traveled on foot with her neighbors and brothers for five days before reaching Bidibidi.

“From South Sudan to Bidibidi, the journey was very bad. Movement was not easy. Because there is no vehicle left, you have to come footing, you come footing; you carry your luggages…. If there’s a church, I just go and sleep in the church. The following day, I also travel. It was just like that until I reached Uganda.” – Nema Nyoka Keni

Life did not immediately improve upon reaching Bidibidi; Nema had difficulty navigating the camp. It was difficult to know where to find water, food, and medication. The camp was originally built to hold 100,000 people, but in only seven months it grew to become the largest refugee settlement in the world, with over 272,000.

When Nema became sick, she was taken to an RMF health center where she was given medication.

“They also give me advice; they counseled me on how to take care of myself at home there. Then I became better.” – Nema Nyoka Keni

“Before fighting started in South Sudan, life was good. You find there is education, you stay together with your people, you play, you have all your friends, you move—there is freedom of movement—you could go everywhere you wanted to go…there are jobs, there is plenty of food. That was before life changed; before then, everything was fine.” – Nema Nyoka Keni

There is no going back to a life before the war. The farms are gone, family members are dead. But what can be done for the future? In Bidibidi, there are more than 272,000 people full of life, full of potential. They have survived the war, the journey to Uganda, and they are ready for what comes next.

In Kiryandongo Refugee Settlement, RMF is helping the community make steady progress through education and vocational training. The people of Kiryandongo have a sense of hope; they are providing for their families and can see a future for the ones they love. Bidibidi may be heading in this direction.

“The interaction with RMF helped me a lot…I also got a job with RMF as an interpreter. I am now working with RMF and they can help me with money that I can use for buying soap and helping my relatives out from there.” – Nema Nyoka Keni

The Work is Just Beginning

With over 272,000 people, the camp is now closed (except to family members). Now begins the work of transitioning from emergency services to normal operations. There is much to be done, including building stronger structures to replace tents, installing lights, and improving water, sanitation, and hygiene (WASH) facilities/practices.

Meanwhile, the people now living in Bidibidi Refugee Settlement will continue to survive, learn new skills, and have hope for a future.

“My hopes are go back to school and finish my diploma. Those are my hopes.” – Nema Nyoka Keni

Learn more about RMF’s role as UNHCR Health Implementing Partner and watch the video below to hear Nema Nyoka Keni’s story of journeying to Bidibidi.