After a three-week hiatus from Haiti to help present Real Medicine’s strategy for the country to key contacts in Washington, including a Director on Obama’s executive committee at the White House, it’s been very strange being back on the ground in Port-au-Prince. 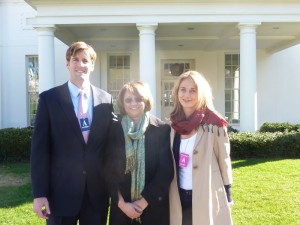 I’m not sure what has specifically changed.  The crush of relief workers, military personnel and patients is less pronounced but still ever-present.  There is still unbearably bad traffic in the mornings and afternoons on the major arteries, UN peacekeepers / Haitian police continue to prowl the streets and setting periodic roadblocks, and the massive tent communities continue to loom, sweeping through the city’s interior up into the suburbs.  But overall, things seem to have settled down into an eerie sort of aftermath calm—a grudging acceptance of the new baseline—where the original problems persist, but have been allowed to recede just below the surface.

One of the topics of discussion you hear everywhere is the concern over where and how the money donated for the reconstruction is being spent.  A recent article mentioned close to $10 billion in aid that has been pledged so far for the long term rebuilding and development of Haiti.  But if you are here on the ground, that money is hard to see.  The tent communities are now getting drenched each night in the inevitable nightly monsoon that happens at about 7pm.  These rains are expected to get much worse as the season progresses.

One tangible thing I have noticed is that much of the rubble that once clogged the streets downtown has been removed or neatly pushed into corners.  However, I do not see many trucks carrying wood or hear the sound of hammers, drills or saws in the distance.  Most people have yet to see the temporary housing structures being built that were so central to the reconstruction plan.  The UN had put together an elaborate strategy to carve out zones in each neighborhood to move the original residents of those neighborhoods back into while the surrounding buildings are rebuilt.  It seemed like a very sensible plan—preserve the social and familial networks while making room for the reconstruction.  However, like many of the plans for this country post-earthquake, we are still waiting to see them actualized. 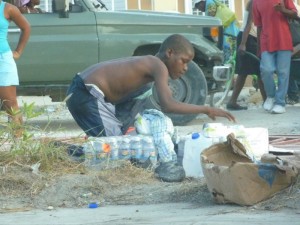 As a somewhat-related side note, I just read a security brief from a friend in the business here that left me very concerned about the stability of Haiti in the near future.  The 4,000 criminals that escaped from jail when the national prison collapsed have reportedly been rebuilding their criminal organizations alongside the reconstruction efforts, and it’s feared that there may be a rise in rioting/crime on the horizon, particularly if the aid/reconstruction funding continues to go unseen.  One piece of news that was particularly startling was that some of these gangs actually have training camps in certain areas of the city where the work to prepare for kidnappings, robberies, etc.  With the 2 MSF employees kidnapped in March, it seems the stage may be set for more clashes between the relief efforts and the inner-city’s criminal element.

Despite these challenges, Real Medicine has continued to push forward with its plans to continue to build sustainable primary healthcare in the communities that need it the most.  We are currently discussing project plans with key partners in Haiti.  One of which involves being the implementing partner for a new primary health clinic in a neighborhood to the north end of the capital that has very little access to basic healthcare.  Our team has been performing due diligence on these partnerships, the proposed communities involved and the project itself to ensure that all three meet with our standard of expectation.   Funding remains a key concern for this and other projects, as we work to access the unprecedented amount of funding that was raised in the initial weeks after the disaster. 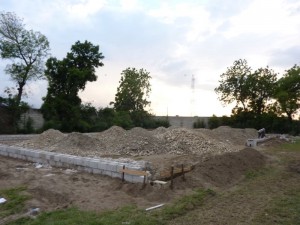 Part of me is happy with the delays, recalling that the ~$9B was given to this country’s development over the last decade had yielded a corresponding drop in GDP of 25%.  Clearly, we need to be careful with our aid and development budgets.  But then I think about those people living under sheets amidst the monsoon-like rain we had tonight—so bad that it was difficult to drive through the runoff on the road.  And I wonder what all this time is really adding to the decision-making—shouldn’t the risk/reward of a development project be clear enough after 8 weeks of review and analysis?  It leaves me wondering if that money will make it to the efforts on the ground after all.  Until then, the development community (Real Medicine included) will continue to hurry-up and wait for continued progress in Haiti.  I only hope that the locals living out in the mud can do the same.﻿﻿