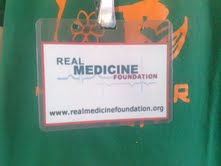 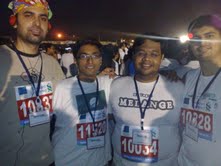 Last Sunday, January 17th 2010, six runners stepped forward to run the Mumbai Marathon on behalf of Real Medicine in an effort to help spread the word about world issues and what Real Medicine is doing to help.

Thanks to Rohit Chemburkar tags were made and handed out to runners interested in running for us. Rohit also took all the photos that you see.

For more information about the LA Marathon team and our team cause–Turkana Kenya–please visit: http://www.realmedicinefoundation.org/our-work/countries/kenya/initiatives/turkana-drought-relief-and-outreach-project/. 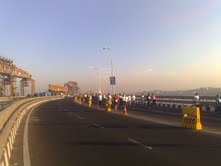 Thank you again to all of the runners who have joined Athletes for Real Medicine!

If there were those who ran, there were others who watched and cheered. There were also those who were silently documenting the proceedings for posterity. Columnist Anil Dharker was doing just that, when ET caught up with him at the Azad Maidan pavilions. Dharker said he was giving finishing touches to a book on the Mumbai Marathon. “The experience I gain today will be extremely helpful. I intend to release the book in two or three months’ time,” he added. The book may just be the first to devote itself exclusively to the Mumbai Marathon. 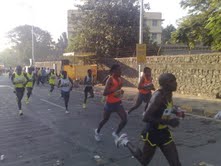 THEY CAME MARCHING IN

The star attraction on the Marine Drive promenade was the Navy Band. To start with, the band belted out patriotic songs, which had turned to rock and roll by the time the Full Marathon winner Denis Ndiso crossed them around 90 minutes later. The other help from the Navy came in the form of a Naval helicopter which was being used by photographers to take shots of South Mumbai.

When you go running, you just can’t miss the tricolour. From flags planted at various corners to even tattoos drawn on cheeks and in some cases, even on children’s torsos. A woman wore three layers of clothing to resemble the tricolour, while there were some half marathoners who chose to run with the national flag.

As the marathoners made their way through Marine Drive attracting cheers all around, one group was oblivious to what was going on — youngsters playing cricket at the Gymkhana ground. There were multiple pitches dug into the cramped ground and nobody seemed to care for the marathon, possibly because of the fear of losing the pitch to another group. 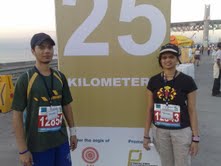 Commandos from the Force One and the elite Quick Response Team of the city police were on duty to make sure the city’s nerves didn’t buzz out of control. The commandos were stationed at both the ends of the Bandra-Worli Sea Link while the police had kept a newly-acquired armoured vehicle at the start and finish points.

The marathon was also a reunion of sorts for three batchmates from IIM-Calcutta, who studied there 25 years ago. Ravindra from Bangalore, Surya Mahadev from Mumbai and Sri Rajan from Delhi completed the half-marathon in the veterans category. Mahadev, who works for a private equity fund, topped the group clocking two hours and five minutes. “You challenge your body as you get older,” he said. Ravindra, who likes to go on hikes and had just been to the Everest base camp, prompted his college gang to look at the marathon seriously.

Like every year, a lot of individuals and voluntary organisations used the occasion to send out messages related to their pet themes. Among these was a gentleman who was promoting vegetarianism. He wore a black suit with all sorts of vegetables stuck on it. And he was rooted in one spot right through, cheering the runners all the way.

A LITTLE BIT OF FUN

No sporting event is complete without a bit of camaraderie, and the Mumbai marathon was no exception. The leading pack of the full marathon passed water bottles to each other, while the slow movers in the half-marathon made way for the full marathoners and cheered them on. There were also those in the “walk-and-talk” category who were just giving their friends company. 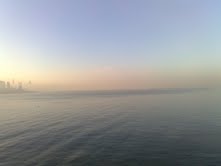 Hardly any event can ever be glitch-free, either. With the half-marathon and full marathon starting from different places, the organisers realised there was a planning error, with the participants running into a mix-up at Worli Sea Face. Volunteers had to quickly get into the act, clearing lanes to ensure the full marathoners did not lose their tempo.

Categories: Athletes for Real Medicine In the news India or View All
Return to Top