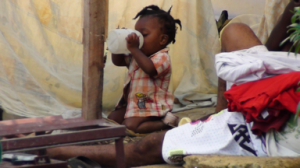 On Friday, January 29, we got an overview of at least 10 refugee camps holding hundreds of thousands of refugees, that seemed to be very much out of the way and not in the spotlight yet. We were led by 3 young Haitian men, one of them who lost his house in the earthquake, was living on one hour of sleep per night and was trying to help the victims of the earthquake as much as he could with the resources he had left. Under his guidance, we bought food to give out, especially to the children, as well as basics such as soap. He was very passionate in his upset wanting us to see thousands of homeless earthquake victims who had not received food and water and supplies to cover their most basic needs. 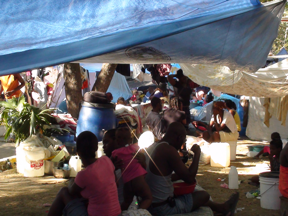 The situation was very similar in all of the camps: hundreds of thousands of persons side by side on cement, protected only by tarps, if at all, infants lying on cement – a sea of humanity none of us had ever seen before to such an extent.

Children fought over food in despair. We spoke with community leaders and they told us that they would receive food sporadically, but not consistently so they couldn’t count on it. They were trying to help each other with the little they had left. We had children grab food out of our hands so violently and desperately. It was heartbreaking.

All of these people had lost their houses, or their houses were damaged so badly that it was and still is unsafe to go inside. There are people who tried and they got injured or killed trying to get their possessions, records, and memorabilia. Soccer fields filled with homeless earthquake victims, the garden of the prime minister, filled with refugees, seas of children and adults everywhere. 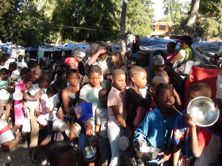