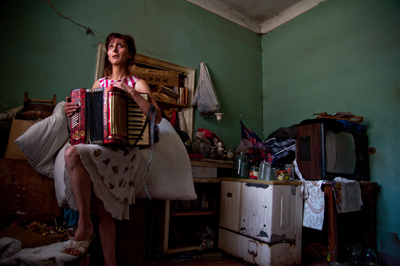 Poverty in Armenia has been on the rise in recent years. A report from the World Bank last year says 28 percent of the people in Armenia live below the poverty level. Southland photographer Sara Anjargolian spent several weeks on the outskirts of the capital city Yerevan documenting the lives of those families living in the shadows and rarely seen. Her photos are compiled in her new book, “How We Live: Life on the Margins in Armenia.” The images are on display at Casitas Studios in Atwater Village. (Audio: KPCC’s Shirley Jahad spoke with Anjargolian there about the stories of families in poverty in Armenia.) 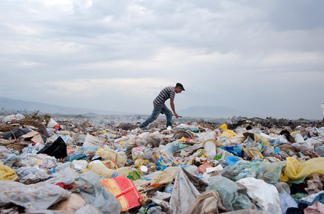 One of the photos is of a man perched on a field of garbage. This is his place of work. He gets up at 6 o’clock each morning and stays out until 5 in the afternoon searching the hilly fields of trash for pieces of plastic or metal to sell for money to feed his family. 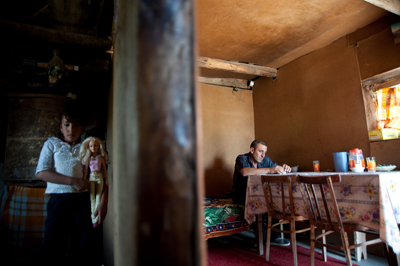 Another photo shows how a family of 10 lives in a 400-square-foot apartment, given to the father for his military service.

Anjargolian says some 400,000 Armenians live in the Southland. Many have strong ties to Armenia. Many make donations to charities back in their homeland. Some have bought houses or condos in Yerevan where tree-lined streets and European cafes are springing up.

But few have seen or heard about these families in poverty. The exhibit of 5×7 foot photos is meant to bring the viewer face-to-face with situation. The display is up until April 18 at Casitas Studios – 3229 Casitas Ave. Los Angeles, CA 90039. Gallery hours Friday April 2: 7-10pm; Saturday April 10: 6-10pm; Sunday April 18: 6-9pm. Schools and community groups may email info@howwelive.org to make tour arrangements.

Categories: Armenia Events or View All
Return to Top