Our plan is not to rebuild, it is to build back better (UN) but Haitians worry: …we don’t really see anything 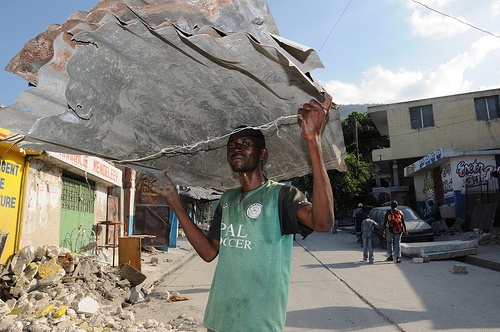 Today in New York the UN meet to discuss their plan to not just rebuild Haiti, but to make it better than it was before–to lift Haiti out of poverty once and for all:

"It is a plan to create a new Haiti. A Haiti where the majority of people no longer live in deep poverty, where they can go to school and enjoy better health, where they have better options than going without jobs or leaving the country all together."

But on the ground the people of Haiti have little reason to trust international follow through. After years of failed policy with little long term effect, Haitians fear these new pledges might be more of the same.

Below are articles addressing Haiti recovery and local fears of being forgotten again.

Certainly, there will always be room for doubt when it comes to matters of this magnitude. This is an incredible challenge and we will have to work together to meet it. 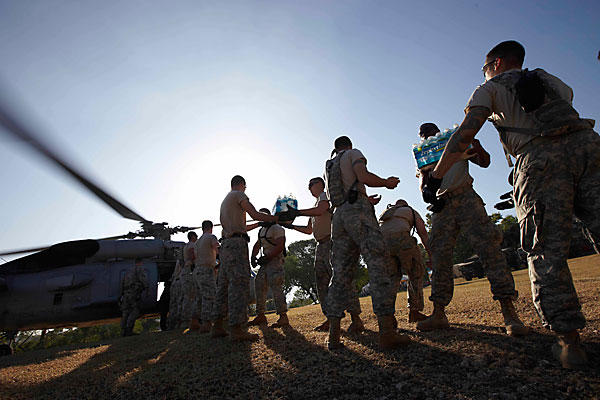 The international community has pledged $5.3bn (£3.5bn) in aid to earthquake-hit Haiti at a UN donor conference.

The amount – to be spread out over the next two years – exceeds the $4bn requested by the Haitian government to rebuild infrastructure.

In total, donors pledged $9.9bn for the next three years and beyond, UN chief Ban Ki-moon said in New York.

“This is the down-payment Haiti needs for wholesale national renewal,” Mr Ban said.

The aim of the conference was to help the country “build back better” after the 12 January earthquake killed 200,000 people and left one million more homeless.

The biggest contributions came from the United States and the European Union, but more than 130 countries, as well as key international financial institutions, took part in the conference.

The EU meanwhile pledged an additional $1.7bn for food and to support the rebuilding of Haitian President Rene Preval’s government.

Mr Ban said a “robust” internet-based tracking system run by the UN would be used to “ensure accountability and transparency” of the aid distribution.

A commission co-chaired by President Preval and former US President Bill Clinton is supposed to ensure that the aid is well coordinated and well spent.

It is an attempt to let Haiti’s government set the priorities for reconstruction while responding to donor concerns about its reputation for corruption, says the BBC’s Barbara Plett at the United Nations.

Delegates repeatedly stressed that the only way to product real and lasting results for Haitians was to strengthen and work with the government, not around it, as has been the case in the past, our correspondent adds.

The Haitian government and international officials have spent weeks putting together a plan for the country.

The first part of the plan is an 18-month project focusing on rebuilding destroyed infrastructure, government buildings, hospitals and schools – which is expected to cost almost $4bn.

Officials estimate that a total of $11.5bn in aid will be needed for long-term reconstruction, which will involve strengthening institutions and refocusing the economy.

Earlier in the conference, Mr Ban urged donor nations not to forget a separate appeal for $1.44bn for food aid and shelter launched by the UN last month. He said just half had so far been pledged.

Aid agencies have warned that thousands are vulnerable to April rains and the hurricane season in June.

The country was already the poorest country in the Western hemisphere before the 7.0-magnitude earthquake struck.

Unemployment and illiteracy were high among its nine million population, with about 80% living on less than $2 a day.

Both Haiti’s government and donors are insisting that a strategy of decentralisation is at the heart of the reconstruction plan. They aim to increase development in parts of the country that are less vulnerable to natural disasters than the capital, Port-au-Prince.

The capital’s population more than tripled to 2.5 million in the three decades before the quake.

Officials also hope to develop a rural agricultural strategy that would enable Haiti to become more self-sufficient. Haiti is dependent on food imports, yet about 80% of the population works in agriculture.

Bank Ki-moon said at the end of a day-long donor conference at UN headquarters in New York City on Wednesday, that the international community had come together “dramatically and in solidarity with the Haitian people” to help them recover from the January 12 earthquake.

His co-chair at the conference, Hillary Clinton, the US secretary of state, called the pledges “an impressive sum by any standard”.

But Ban also cautioned that “we need now to deliver”.

International aid agency Oxfam said although the amount pledged was impressive, countries must ensure the funds were new, “not recycled money taken from other humanitarian crises”.

“The poor and vulnerable of other disasters should not be paying for this,” Philippe Mathieu, a spokesman for Oxfam, said.

It was not immediately clear if all the pledges involved new money, as some delegates appeared to be describing existing aid projects.

Ban had previously called for quick donations in response to a UN request for $1.4bn in immediate humanitarian assistance for Haiti, which even before the January 12 earthquake was the poorest country in the western hemisphere.

So far, that request has only been half funded, fuelling fears that the rainy season will compound the disaster for some the 1.2 million Haitians left homeless by the disaster.

But on Wednesday Ban was optimistic, saying the pledges at the conference were “the down payment Haiti needs for wholesale national renewal. It is the way to build back better”.

That was substantially more than the $3.8bn the Haitian government had sought for that period.

But the remaining $4.6bn pledged for beyond the two-year mark – bringing the total amount to $9.9bn – fell short of the $11.5bn total package that Haiti’s government had wanted to rebuild what was destroyed by the quake but also to decentralise the economy to create jobs and wealth outside Port-au-Prince.

Still, Rene Preval, Haiti’s president, thanked donors for the “heartfelt effort that demonstrates that Haiti is not on its own” and said his country “must take advantage of this opportunity that we now have”.

“I appeal to my fellow Haitians to understand the effort that has now been made by the international community and the responsibility that we now have in the interests of our country to respond rapidly and appropriately,” he said.

Preval had asked donors to focus on education and help the country’s nine million people provide for their own future.

And Clinton echoed that call, saying: “Aid is important but aid has never saved a country. Our goal must be the empowerment of the Haitian people – they’re the ones who will carry on the work of rebuilding Haiti long after our involvement has ended.”

Clinton also stressed that Haiti’s leaders must guide “a transparent recovery”, adding that the international community must change its past practice of working around the government and ensure that it is working with the government.

Haiti’s government has detailed its plans for the money in a 55-page rebuilding plan, at the core of which is the Interim Haiti Recovery Commission, which will be co-chaired by Clinton’s husband, Bill, the former US president, and Jean-Max Bellerive, Haiti’s prime minister.

The commission’s two-dozen members will be tasked with co-ordinating and paying out the aid money expected to flow in, a key mechanism to allay donor concerns over Haiti’s history of official corruption and political unrest, and assure them that the money will go where it is intended.

The magnitude-7 earthquake destroyed the government and commercial centre of Haiti’s capital Port-au-Prince and killed between 217,000 and 300,000 people, according to government estimates.

An estimated 1.2 million people were also made homeless, many of whom continue to live in tents and under makeshift shelter.