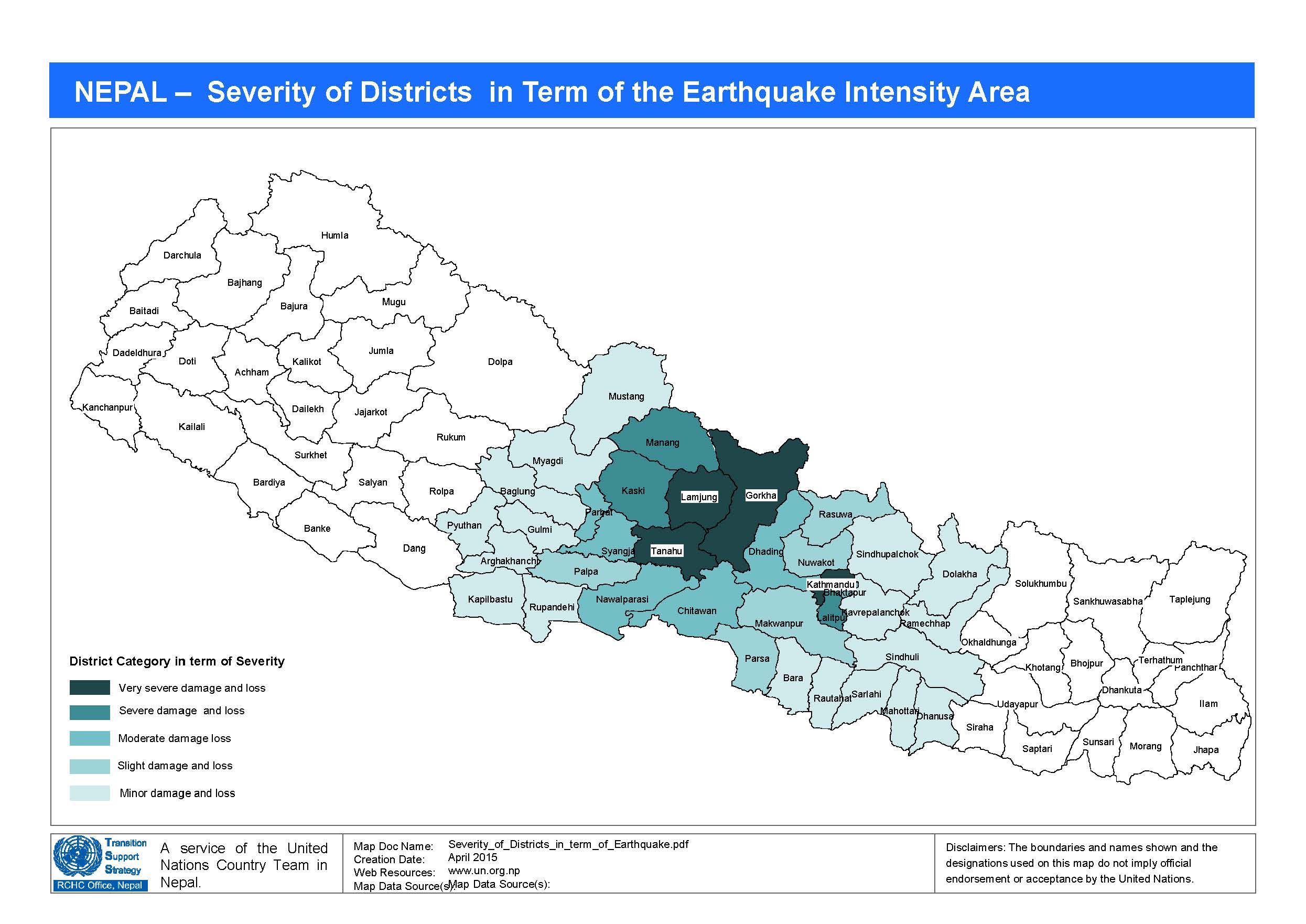 At 11:56 local time, a 7.8 magnitude earthquake struck Nepal, with epicenter in Lamjung District (north-west) of Kathmandu; south of China border).

Government reporting 30 out of 75 districts affected in the Western and Central Regions, including Kathmandu Valley districts. This includes mountain and hilly areas, disperse rural populations as well as some very densely populated districts and Nepal’s 2 largest cities – greater Kathmandu and Pokhara. Most affected districts are Sindulpalchowk, Kavre, Nuwakot, Rasuwa, Dolakha in the CR and Gorkha and Lamjung in the WR. Initial reports from UN field offices are that the Eastern Region/FWR is not badly affected and Terrai has been minimally affected. Government reporting over 1900 deaths and over 5000 injuries; this is expected to increase. No confirmed figures yet on affected populations in the affected areas.

Impacts in Kathmandu valley include collapsed buildings and walls especially historic buildings in centres, but less overall damage and collapse of buildings than expected.

In Kathmandu Valley, hospitals area overcrowded, running out of room for storing dead bodies and also running short of emergency supplies. BIR hospital is treating people in the streets. There is a need to replenish medical stocks to support health response efforts.

Majority of population remained outside houses for the first night; heavy aftershocks continued through the night.

The priority remains saving lives and immediate search and rescue ongoing. In support of government led SAR, several international search and rescue teams have or are scheduled to arrive in Kathmandu. Known surge support include:

– Indian SAR team has already landed and begun operations. A total of 14 helicopters will be mobilized to support efforts.

– US DART team set to arrive for SAR support

– US L.A. team ready to deploy for SAR or debris management (to be confirmed)

There is no update on Government requests for assistance; requests include:

– Search and Rescue capacity, particularly for the Kathmandu Valley where larger buildings have collapsed;

– medical teams, supplies and tenting for hospitals, and dead-body bags;

– heavy equipment for rubble removal;
– and helicopters for transport of injured and access to blocked areas

Core cluster (Food, WASH, Protection, Emergency Shelter, Health) meetings have are ongoing with an HCT meeting scheduled for 2:00pm 26 April 2015. A joint coordination meeting will then be held at NEOC with the Government at 3:00pm.

Coordination centres are being established in numerous locations including the NEOC, Humanitarian Staging Area at the international airport, and the UN office.

Government reports that all hospital staff mobilized and are deploying small teams to hospitals in Kathmandu. Chitwan and Pokhara which both are well staffed are sending medical teams to worst affected areas – Gorkha and Lamjung.

Government is intending to set-up displaced camps in Kathmandu Valley and outside, where there are APF bases as these have established water supply and security.

Government was requested to mobilize the construction sector for rubble removal.

Ministry of Finance has called a meeting with donors for 2:00pm to discuss resource mobilization.

National Emergency Operating Centre is operational. The Kathmandu and Pokhara airport remains open. Some commercial flights appear to be coming in.

Status of the main feeder roads outside of Kathmandu Valley are, overall, accessible. Access on side roads is damaged and limited.

Government has been requested but is still unclear on expedited customs clearance for emergency cargo and processes at the airport.

A 24 hour emergency health operations room has been set up at the Ministry of Health. It will coordinate with the national emergency operations centre (at MOHA).

The main hospitals in KTM are still standing, and functioning, although overloaded; whereas some damage reported to hospitals in Ramechap, Nuwakot, Sindhupalchowk. In Gorkha, damage is very severe though unclear whether hospitals are operational.

Several teams have been deployed; priorities at the moment are logistics and drugs. Immediate priorities are managing dead bodies and injured (many head and spinal injuries requiring airlifting).

Post-earthquake diseases are a concern – diarrhea is already an issue in Kathmandu Valley.

WHO has agreed to provide funds and emergency team arriving tomorrow, which will coordinate health response. Coordinated assessment is required to need to map capabilities of various hospitals. The assessments of the five severely affected districts to be done jointly, areas will be surveyed by helicopter on 26 April 2015, weather permitting.

As of 7 am today there were 600 dead bodies in 3 hospitals in KTM. There are not enough beds, many injured are treated on the ground. 500 injured were brought to Dhulikhel hospital alone, of which 50% are still there. International and local Health teams are being mobilized, however transportation and logistics is an issue. Four (national) teams being sent to Gorkha where it is estimated that in some areas, 80% of houses are gone.

There is a need for surgeons, orthopedics, and paramedics, as well as logistics support.

The Ministry of Health and Population wants to prioritize local procurement, and have called a meeting with local suppliers so as to mobilize supplies within the next few days.

Field hospital Tents are badly needed. Many partners are offering tents but the requests need to be coordinated. Blankets are also needed

WHO has prepositioned surgical kits which are now being distributed.

Each Ministry has been given a responsibility – MOHP is responsible for mobilizing medical human resources and making hospitals capable to perform.

Logistics management Division have come up with a list of 40 items where procurement has been started but supplies may run out; this list will be circulated shortly. Most are antibiotics.

They do not want a fragmented approach; asking each international partner to take on a district and address all needs there (unlikely to happen)

USAID and DFID have medical teams in, also a UNICEF WASH team.

5 shelter camps have been established in areas belonging to the Armed Police Force. These have water sources. We do not know how many people will be in the camps.

Incoming support from regional offices through the IASC GBV Area of Responsibility is expected to begin Monday 27 April 2015.

So far information we have in-country is that:

Categories: Disaster Relief Nepal or View All
Return to Top